Robert Herrick (August 24, 1591 – October 1674) was a seventeenth century English poet and cleric, known as the most famous of the "Sons of Ben," a poetic movement among the Cavalier Poets of the mid seventeenth-century that both held up the classically-influenced poetry of Ben Jonson as an exemplary role-model, and rejected the fanaticism of the Puritans and supported the Restoration of Charles II. Herrick, who knew Jonson personally, carried on Jonson's mission of reinvigorating English poetry by adapting the English language to ancient Greek and Latin forms. In particular, Herrick introduced the Greek style of lyrical poetry to English literature. Herrick's lyrics were notable not only because of their beauty, but because they adhered to the stricture of classical form, and preserved the learned allusions to classical literature and mythology that had been a hallmark of Jonson's works.

Herrick's poetic style, however, is noticeably lighter than Jonson's; while Jonson was frequently pedantic and complicated, Herrick is almost always clear, writing in language that is at times almost effortlessly simple. Herrick's themes, although classical, tend more towards the pastoral than the mythological, addressing topics such as the wondrousness of nature and the fleetingness of love. His technical mastery is unquestioned, and many critics of poetry considered Herrick quite possibly the most skilful English poet of the latter seventeenth-century due to his ability to utilize rhyme, sound and imagery with equal talent. Although a relatively minor poet in comparison to the giants of seventeenth-century English verse such as Shakespeare, Marlowe, and Jonson, Herrick is nonetheless a significantly influential figure. He was widely admired by eighteenth-century poets, both for the breadth of his classical learning and for his lightness of touch, and such divergent authors as Thomas Gray and Samuel Johnson held him in high esteem.

Born in Cheapside, London, Herrick was the seventh child and fourth son of Nicholas Herrick, a prosperous goldsmith, who committed suicide when Robert was only a year old. It is likely Robert attended Westminster School. In 1607 he became apprenticed to his uncle, Sir William Herrick, who was a goldsmith and jeweler to the king. The apprenticeship ended after only six years when Herrick, at age twenty-two, matriculated at St John's College, Cambridge. He acquired his degree and graduated from Cambridge University in 1617.

Robert Herrick became a member of the Sons of Ben, a group of Cavalier poets centered on an admiration for the works of Ben Jonson. In or before 1627, he took religious orders, and, having been appointed chaplain to the duke of Buckingham, accompanied him on his disastrous expedition to the Isle of Rhé in 1627. He became vicar of the parish of Dean Prior, Devon in 1629, a post that carried a term of thirty-one years.

It was in the secluded country life of Devon that he wrote some of his best work, drawing on the natural imagery to compose his powerful poetry of nature, such as the following poem written during this period, entitled "To Blossoms":

Fair pledges of a fruitful tree,

Why do ye fall so fast?

Your date is not so past,

But you may stay yet here awhile

To blush and gently smile,

And go at last.

What, were ye born to be

An hour or half's delight,

And so to bid good-night?

Merely to show your worth,

And lose you quite.

But you are lovely leaves, where we

May read how soon things have

Their end, though ne'er so brave:

And after they have shown their pride

In the wake of the English Civil War, his position was revoked on account of his refusal to make a pledge to the Solemn League and Covenant and his expressed loyalties to the royalty. Having lost his parsonage, Herrick returned to London to eke out a living. His position was returned to him in the Restoration of Charles II and he returned to Devon in 1662, residing there until his death in 1674. Herrick was a bachelor all his life, and many of the women he names in his poems are thought to be fictional.

His reputation rests on his Hesperides, a collection of lyric poetry, and the much shorter Noble Numbers, spiritual works, published together in 1648. He is well-known for his style and, in his earlier works, frequent references to lovemaking and the female body. His later poetry was more of a spiritual and philosophical nature. Among his most famous short poetical sayings are the unique monometers, such as "Thus I / Pass by / And die,/ As one / Unknown / And gone."

The opening stanza of "To the Virgins, to Make Much of Time," which includes one of the more famous lines in English poetry from one of his more famous poems, is as follows: 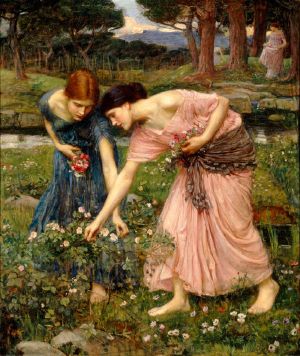 Gather ye rosebuds while ye may, by John William Waterhouse.

GATHER ye rosebuds while ye may,
Old Time is still a-flying;
And this same flower that smiles to-day,
To-morrow will be dying.

The glorious lamp of heaven, the sun,
The higher he's a-getting;
The sooner will his race be run,
And nearer he 's to setting.

That age is best which is the first,
When youth and blood are warmer;
But being spent, the worse, and worst
Times still succeed the former.

Then be not coy, but use your time
And while ye may, go marry;
For having lost but once your prime,
You may for ever tarry

This poem is an example of the carpe diem genre; the popularity of Herrick's poems of this kind helped revive the genre. Herrick helped to revive a variety of classically-inspired genres, including the epigram, elegy, satire and pastoral. Due to this adherence to classical form (as well as his royalist politics) Herrick is considered a semi-unofficial member of the larger poetic school known as the Cavalier Poets that includes John Suckling and Ben Jonson among its principal members. Like the rest of the Cavaliers, Herrick took a "cavalier" attitude not just towards the royal court (to which he remained intensely loyal), but towards life in general. Herrick's poetry, as seen above, implores the reader again and again to "be not coy, but use your time / And while ye may, go marry." It is poetry of the early Renaissance, classical in style but almost entirely personal in content, and, while perhaps not as innovative as the Metaphysical poetry of John Donne and cohorts, it is also much more pleasantly colloquial and much less intense than much of the ambitious poetry of the seventeenth century. Herrick's poetry is among some of the first (and some of the most beautiful, at that) to celebrate the simple pleasures and wonders of the everyday—the sights of nature, the bonds of love, and a simple faith in the Church of England. As a result of this uniquely personal (and often naturalistic) bent in Herrick's poetry, some scholars have postulated that he is among one of the earliest Pre-Romantics; certainly his poetry has much more in common with the works of William Wordsworth than with anything produced immediately after his death by the likes of Dryden and Pope. Regardless of how one categorizes Herrick, he is a simple, honest, and wonderfully delightful poet too often overlooked, but whose influence nevertheless remains significant among those select few to have discovered his works.