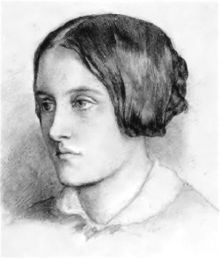 A sketch of Christina Rossetti by her brother, Dante Gabriel Rossetti

Christina Georgina Rossetti (December 5, 1830 – December 29, 1894) was a Victorian era English poet. Her family was artistically talented and the four siblings included brothers Dante Gabriel Rossetti (an artist) and the critic and writer, William Michael Rossetti. The two brothers were among the founding members of the Pre-Raphaelite Brotherhood.

Although Rossetti's poetry was largely overlooked in the wake of modernism, feminists in recent years have taken a new look at her body of work. In her time, she was considered one of Britain's greatest living poets next to Alfred Lord Tennyson and Gerard Manley Hopkins, who was a great admirer of her work. Though she is sometimes considered a children's poet, many poems, particularly her later sonnets and devotionals, reflect religious themes and sentiments.

Rossetti's poems are studied by religious scholars because of her consistent effort to deal with the conflict between earthly passions (Eros) and spiritual love (Agape). Her poetry is permeated with her struggles in her own life to resolve the conflict. She ultimately chose a life of asceticism based on the fear that giving in to her earthly passions would land her in hell.

Rossetti was born in London and educated at home by her mother Frances Polidori Rossetti, who was the sister of Lord Byron's friend and physician, John William Polidori. Her father, Gabriele Rossetti, was an Italian poet and a political asylum seeker from Naples, Italy. In addition to her two highly accomplished brothers, she had a sister, Maria Francesca Rossetti, who also became a published writer and later an Anglican nun.

In the 1840s the deterioration of her father's physical and mental health forced him to resign from his position as professor of Italian at King's College, Oxford. Consequently all of the children needed to find work in order to contribute to the family's dire financial circumstances. Christina, the youngest and having the frailest health out of the four children, wrote encyclopedia articles. Her earliest poems were published, with her brother's help, in the literary journal, The Athenaeum. She also published several poems in the Pre-Raphaelite Brotherhood's magazine, The Germ.

When she was 14, Rossetti purportedly suffered through a period of depression and related physical illness. During this time she, her mother, and her sister became followers of the Anglican movement that was part of the Church of England. This religious devotion would play a major role in Rossetti's personal life. In her late teens she became engaged to the Pre-Raphaelite painter James Collinson; however, their engagement ended because of his conversion to Catholicism. Later she became engaged to the linguist Charles Cayley, best known for translating Dante and the Greek classics. Although they remained friends throughout her life, she ultimately refused to marry him, also for religious reasons. These two broken engagements inspired themes in her poems of regret and lost love. This motif is especially apparent in the sonnet sequence Monna Innominata. 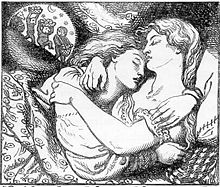 Illustration for the cover of Rossetti's Goblin Market and Other Poems (1862) by her brother, Dante Gabriel Rossetti

Rossetti began writing at an early age but she was 31 before her first work was published, Goblin Market and Other Poems (1862). The collection garnered critical praise and Elizabeth Barrett Browning's death two months later led to Rossetti being hailed as her natural successor as 'female laureate' of Great Britain. Her influences included religious writers such as Augustine and Thomas à Kempis. She also admired George Herbert and John Donne.

The title poem from the book, Goblin Market, is Rossetti's best known work and, although at first glance it may seem merely to be a nursery rhyme about two sisters' misadventures with goblins, the poem is multi-layered, challenging, and complex. Critics have interpreted the piece in a variety of ways: seeing it as an allegory about temptation and salvation; a commentary on Victorian gender roles; and a work about erotic desire and social redemption. Some readers have noted its likeness to Samuel Taylor Coleridge’s Rime of the Ancient Mariner given both poems' religious themes of temptation, sin and redemption through vicarious suffering.

Her Christmas poem "In the Bleak Midwinter" became widely known after her death when it was composed as a Christmas carol by English composer Gustav Holst. The easy musicality of this piece makes it accessible to present day readers. An excerpt reads:

Our God, heaven cannot hold Him,
Nor earth sustain;
Heaven and earth shall flee away
When He comes to reign:
In the bleak mid-winter
A stable-placed suffice
The Lord God Almighty
Jesus Christ 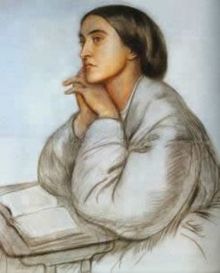 In 1871 Rossetti developed Graves' disease, which affected both her heath and her appearance. Although she continued to write and publish for the rest of her life, she focused primarily on devotional writing and children's poetry. In addition to taking care of her aging mother and siblings, she volunteered for ten years at House of Charity at Highgate, which served unmarried mothers and the homeless. Her later poems reflect a deep sympathy for impoverished women and former prostitutes.

Her last published work was Verses, written in 1893.

After a long and protracted battle with cancer, Rossetti died on December 29, 1894. She is buried in Highgate Cemetery in London. Rossetti's brother William Michael edited her complete works in 1904.

In the early twentieth century, Rossetti's popularity faded as many respected Victorian writers' reputations suffered from modernism's backlash. Rossetti remained largely unnoticed and unread until the 1970s when feminist scholars began to recover and comment on her work. Subsequently, Rossetti's writing has been rediscovered and has rightfully regained admittance into the Victorian literary canon.

During her life Rossetti was ambivalent about women's suffrage. She viewed this nescient stage of 'women's liberation' as being in direct contradiction to Biblical views of what a woman's role should be in the world. However, some scholars have identified hidden feminist themes in her poetry that point to the conflicting emotions resulting from Victorian societal restrictions being in opposition to the aspirations of a woman seeking both earthly and heavenly love. It is from within this tension that depth and meaning to her poetry is expressed.