In zoology, gaur is the common name for a large, dark-coated, wild bovid, Bos gaurus, characterized by white or tan lower legs, large ears, strongly and regularly curved horns that curve inward and backward at the tip, and a deep hollow region on the forehead. The ridge on the back is very strongly marked, and there is no distinct dewlap on the throat and chest. The gaur is found in South Asia and Southeast Asia, with the biggest populations today found in India. The gaur (previously Bibos gauris) belongs to the same genus, Bos, as cattle (Bos taurus) and yaks (B. grunniens) and is the largest wild bovid (family Bovidae), being bigger than the Cape buffalo (Syncerus caffer), water buffalo (Bubalus bubalis), and bison (Bison sp.).

The gaur also is called seladang or in context with safari tourism Indian bison, although this is technically incorrect as it does not belong to the Bison genus. The gayal or mithun (Bos frontalis or B. gaurus frontalis) is often considered the domesticated form of the gaur.

Powerful and massive, the adult gaur has few predators, although the young and unhealthy animals enter the food chain as the prey of crocodiles, leopards, and other large animals, and a tiger can kill an adult. For humans, the gaur adds to the wonder of nature. At one time, they were a prize target of big-game hunters. However, they are now endangered and protected.

To the Adi people, the possession of gaur is the traditional measure of a family's wealth. In the Adi language, gaur are called "Tadok" and often referred to as "Mithun." Gaur are not milked or put to work but given supplementary care while grazing in the woods, until they are slaughtered. The gaur is recognized by the high convex ridge on the forehead between the horns, which bends forward, causing a deep hollow in the profile of the upper part of the head.

The horns are found in both sexes, and grow from the sides of the head, curving upwards. They are regularly curved throughout their length, and are bent inward and slightly backward at their tips. The horns are flattened to a greater or less degree from front to back, more especially at their bases, where they present an elliptical cross-section; this characteristic being more strongly marked in the bulls than in the cows. Yellow at the base and turning black at the tips, the horns grow to a length of 80 centimeters (32 inches). A bulging gray-tan ridge connects the horns on the forehead. The animals have a distinct ridge running from the shoulders to the middle of the back; the difference in height between the shoulders and rump may be as much as five inches in height. This ridge is caused by the great height of the spines of the vertebrae of the fore part of the trunk as compared with those of the loins.

The ears are very large and the tail only just reaches the hocks. There is a dewlap under the chin which extends between the front legs. There is a shoulder hump, especially pronounced in adult males. The hair is short, fine, and glossy, and the hoofs are narrow and pointed (Lydekker 1893). In old bulls, the hair becomes very thin on the back (Lydekker 1893).

Gaur are said to look like the front of a water buffalo with the back of a domestic cattle. Males have a highly muscular body, with a distinctive dorsal ridge and a large dewlap, forming a very powerful appearance. Females are substantially smaller, and their dorsal ridge and dewlaps are less developed.

Gaurs are the heaviest and most powerful of all wild bovids. Males often reach 1000 to 1500 kilograms (2200-3300 pounds) and females 700 to 1000 kilograms (1540-2200 pounds). The three wild subspecies generally recognized vary in terms of weight. The Southeast Asian gaur is the largest, and the Malayan gaur is the smallest. The male Indian gaurs average 1300 kilograms, and large individuals may exceed 1700 kilograms, or 1.7 tons. On the other hand, a Malayan gaur usually weighs 1000 to 1300 kilograms. The largest of all gaur, the Southeast Asian gaur, weighs about 1500 kilograms (1.5 tons) for an average male.

In color, the adult male gaur is dark brown, approaching black in very old individuals; the upper part of the head, from above the eyes to the nape of the neck, is, however, ashy gray, or occasionally dirty white; the muzzle is pale colored, and the lower part of the legs pure white. The cows and young bulls are paler, and in some instances have a rufous tinge, which is most marked in individuals inhabiting dry and open districts. The color of the horns is some shade of pale green or yellow throughout the greater part of their length, but the tips are black (Lydekker 1893). 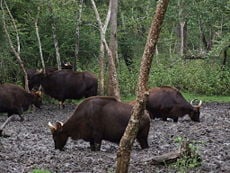 Wild gaur at a salt lick

In the wild, gaurs live in small mixed herds and graze on grasses, shoots, and fruits. A family group may consist of two to 40 individuals. Gaur herds are led by an old adult female (the matriarch). Adult males may be solitary. During the peak of the breeding season, unattached males wander widely in search of receptive females. No serious fighting between males has been recorded, with size being the major factor in determining dominance. Males make a mating call of clear, resonant tones which may carry for more than 1.6 kilometers. Gaurs have also been known to make a whistling snort as an alarm call, and a low, cow-like moo. The average population density is about 0.6 animals per square kilometer, with herds having home ranges of around 80 square kilometers.

During the dry season, herds congregate and remain in small areas, dispersing into the hills with the arrival of the monsoon. While gaurs depend on water for drinking, they do not seem to bathe or wallow.

Where gaurs have not been disturbed, they are basically diurnal, being most active in the morning and late afternoon and resting during the hottest time of the day. But where populations have been disturbed by human populations, gaurs have become largely nocturnal, rarely seen in the open by mid-morning.

Breeding takes place throughout the year, though there is a peak between December and June. The gestation period of gaurs is 275 days, with normally one (rarely two) young born. Weaning lasts for seven to 12 months, and sexual maturity is reached in the second or third year. The life span of the gaur is about 30 years.

Due to their formidable size and power, the gaur has few natural enemies. Crocodiles, leopards, and dhole packs occasionally attack unguarded calves or unhealthy animals, but only the tiger has been reported to kill a full-grown adult. One of the largest bull gaur seen by George Schaller during the year 1964 in Kanha national park was killed by a tiger (Schaller 1967). On the other hand, there are several cases of tigers being killed by gaur. In one instance, a tiger was repeatedly gored and trampled to death by a gaur during a prolonged battle (Sunquist and Sunquist 2002). In another case, a large male tiger carcass was found beside a small broken tree in Nagarahole national park, being fatally struck against the tree by a large bull gaur a few days earlier (Karanth and Nichols 2002). When confronted by a tiger, the adult members of a gaur herd often form a circle surrounding the vulnerable young and calves, shielding them from the big cat. A herd of gaur in Malaysia encircled a calf killed by a tiger and prevented it from approaching the carcass (Schaller 1967), while in Nagarahole, upon sensing a stalking tiger, a herd of gaur walked as a menacing phalanx towards it, forcing the tiger to retreat and abandon the hunt (Karanth 2001). Gaurs are not as aggressive toward humans as wild Asian water buffaloes (Perry 1965).

In some regions in India where human disturbance is minor, the gaur is very timid and shy, and often shuns humans. When alarmed, gaurs crash into the jungle at a surprising speed. However, in South-east Asia and south India, where they are used to the presence of humans, gaurs are said by locals to be very bold and aggressive. They are frequently known to go down fields and graze alongside domestic cattle, sometimes killing them in fights. Gaur bulls may charge unprovoked, especially during summer time when the heat and parasitic insects make them more short-tempered than usual. 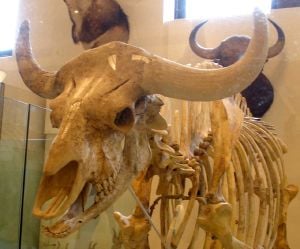 There are three wild subspecies: 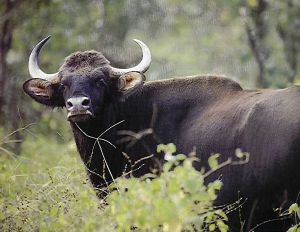 In addition, the gayal or mithum is the domestic gaur, probably a gaur-cattle hybrid breed, and is sometimes considered a separate species (Bos frontalis) or the subspecies Bos gaurus frontalis. When wild Bos gaurus and the domestic Bos frontalis are considered to belong to the same species, the older name is Bos frontalis and would be according to the rules of the International Commission on Zoological Nomenclature (ICZN). However, in 2003, the ICZN "conserved the usage of 17 specific names based on wild species, which are pre-dated by or contemporary with those based on domestic forms," confirming Bos gaurus for the gaur (ICZN 2003).

Previously thought to be closer to bison, genetic analysis has found that gaur are closer to cattle with which they can produce fertile hybrids. They are thought to be most closely related to banteng, but the gaur is easily distinguished by lacking a white rump patch.

Retrieved from https://www.newworldencyclopedia.org/p/index.php?title=Gaur&oldid=889018
Categories:
Hidden category:
This page was last edited on 24 December 2008, at 18:06.
Content is available under Creative Commons Attribution/Share-Alike License; additional terms may apply. See Terms of Use for details.