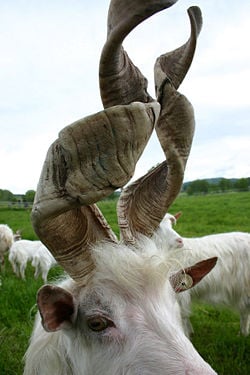 A goat with spiral horns

In zoology, a horn is one of a pair of hard, pointed, often permanent projections on the head of various hoofed mammals (ungulates) consisting of a core of living bone covered by a sheath of keratin and other proteins. Examples of animals with true horns include antelopes, cattle, buffalo, and goats. The term also is used to refer more specifically to the hard keratinous material forming the outer covering.

While both a bony core and a covering of keratinous material constitute the definition of a "true horn," there are many other hard structures projecting from the head of animals that do not meet these requirements and yet are referred to commonly as horns. These include the antlers of deer (dead bone without horn covering), the horns of rhinoceroses (thickly, matted hair that has keratin but lacks a bony core), and the ossicones of giraffes (skin-covered bony knobs formed from ossified cartilage).

Horns provide a diversity of important functions for the animals bearing them, such as defense from predators, tools in fighting other members of the species for territory or mating, feeding, courtship displays, and cooling. Humans also have utilized them for such valued purposes as making musical instruments, carrying items (gunpowder and drink), Traditional Chinese Medicine (TCM), and for making tools, furniture, and decorations. However, sometimes animals have been hunted just for their horns, such as in TCM or selectively hunting bighorn sheep with huge horns as hunting trophies. Such practices have had a detrimental impact on those animals that stand out because of their horns. 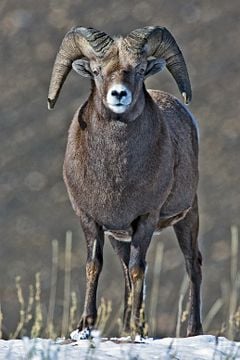 Big horn sheep with a pair of horns

True horns are composed of a bony core covered by keratinous material. Bones are semi-rigid, porous, mineralized structures that consist of cells in a hard matrix and that form part of the endoskeleton of vertebrates. Although externally they may appear to be solid structures, in reality they are composed of living bone tissue interlaced with blood vessels, nerve fibers, and so forth. Keratins are tough and insoluble fibrous structural proteins that form the chief, hard, nonmineralized structural component of horns, hair, wool, nails, claws, hooves, and other vertebrate tissues (as well as part of various invertebrate structures). Only chitin rivals the various keratins in terms of their toughness as biological materials.

True horns are found only among the ruminant artiodactyls (even-toed ungulates), in the families Antilocapridae (pronghorn) and Bovidae (cattle, goats, antelope, and so on). These animals have one or occasionally two pairs of horns, which usually have a curved or spiral shape, often with ridges or fluting. In many species only the males have horns. Horns start to grow soon after birth, and continue to grow throughout the life of the animal, except in pronghorns, which shed the outer kertinous layer annually, but retain the bony core. Unlike the horns of the family Bovidae, the horn sheaths of the pronghorn are branched, each sheath possessing a forward pointing tine (hence the name pronghorn).

Similar growths on other parts of the body are not usually called horns, but spurs, claws, or hoofs.

The term "horn" is also popularly applied to other hard and pointed features attached to the head of animals in various other families.

The Horned lizards (Phrynosoma) have projections on their heads consisting of a hard keratin covering over a bony core, similar to mammalian horns.

Many mammal species in various families have tusks, which often serve the same functions as true horns, but are in fact oversize teeth. These include the Moschidae (musk deer, which are ruminants), Suidae (wild boars), Proboscidea (elephants), Monodontidae (narwhals), and Odobenidae (walruses). 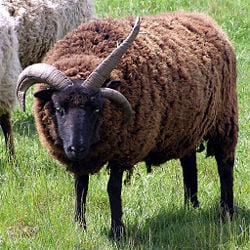 A ram with a third horn growing out of its head.

Animals utilize their horns in a variety of ways. They may be used in fighting, whether for defense from predators or for fighting members of their own species for territory, dominance, or mating priority. Horns may be used in feeding, such as to root in the soil or to strip bark from trees. Some animals with true horns use them for cooling, the blood vessels in the bony core allowing the horns to function as a radiator.

In animal courtship, many animals use horns in displays. For example, the male blue wildebeest (Connochaetes taurinus)&mash;an antelope that is characterized in both sexes by horns that are smooth and initially curving downward or outward—reams the bark and branches of trees to impress the female and lure her into his territory.

A shofar made from the horn of a Greater kudu, a woodland antelope, in the Yemenite Jewish style.

Horns have been used by people for many purposes throughout history. Some bovid horns are used as musical instruments, for example the shofar, which is often made from the horn of a ram (although any animal except a cow or calf can be used) and is used for Jewish religious purposes. The shofur is referenced as far back as the book of Exodus. These have evolved into brass instruments in which, unlike the trumpet, the bore gradually increases in width through most of its length—that is to say, it is conical rather than cylindrical. These are called horns, though today they are made of metal.

Drinking horns' are bovid horns removed from the bone core, cleaned, and polished and used as drinking vessels.

Powder horns were originally bovid horns fitted with lids and carrying straps, used to carry gunpowder. Powder flasks of any material may be referred to as powder horns.

The keratin (horn), sometimes including keratin from other parts of animals, such as hoofs, may be used as a material in tools, furniture, and decoration, among other uses. In these applications, horn is valued for its hardness, and it has given rise to the expression hard as horn. Horn is somewhat thermoplastic and (like tortoiseshell) was formerly used for many purposes where plastic would now be used. Horn also may be used to make glue.

Horn bows are bows made from a combination of horn, sinew, and usually wood. These materials allow more energy to be stored in a short bow than wood would.

"Horn" buttons are usually made from deer antlers, not true horn.

Use of animal horns is controversial, especially if the animal was specifically hunted for the horn as a hunting trophy or object of decoration or utility. Some animals are threatened or endangered to reduced populations partially from pressures of such hunting.