Narwhal is the common name for an Arctic whale, Monodon monoceros, of the cetacean suborder Odontoceti (toothed whales), characterized by mottled gray color, no dorsal fin, a long and low dorsal hump, a short head, and in males (and occasionally females) a single (rarely double) long, straight tusk, with a left-handed spiral groove. Narwhals have only two teeth, of which the left incisor in males typically forms the tusk. The narwhal is a creature rarely found south of latitude 70°N.

The narwhal also is known as the unicorn whale because of its unique tusk. These tusks commanded great attention and commercial value in medieval Europe because of the belief they were the horns of the legendary unicorn and also possessed magical powers. They also featured in Inuit legend.

Ecologically, the narwhal is an important part of Arctic food chains, providing food for polar bears and killer whales (orcas), and preying upon fish, squid, and shrimp. It also is important to the traditional subsistence economy. For the Inuit people, the narwhal has long been hunted for food and tusk ivory, and tusks continue to have value as curiosities and for carving. Narwhals have rarely been the target of large-scale commercial hunting, although they have at times been targeted in the Canadian Arctic and Greenland, and they continue to be hunted opportunistically. Populations are about 80,000 individuals worldwide and they remain conservation dependent.

A narwhal skull with double tusks, a rare trait in narwhals. Usually males have a single long tusk protruding from the incisor on the left side of the upper jaw.

As toothed whales, comprising the suborder Odontoceti of the order Cetacea, the narwhal is characterized by the main bones of the upper jaw thrust upward and back over the eye sockets, only one blowhole, and the presence of teeth. In addition to whales, this suborder includes dolphins and porpoises as well. The narwhal (Monodon monoceros) is an Arctic species of cetacean. It is one of two species of white whale in the Monodontidae family (the other is the beluga whale).

Narwhals are generally pale with brown speckles in color, though the neck, head, and edges of the flippers and fluke are nearly black. Older animals are usually more brightly colored than younger animals (FAO). Male narwhals weigh up to 1,600 kilograms (3,500 pounds), and the females weigh around 1,000 kilograms (2,200 pounds).

The most conspicuous characteristic of the narwhal is the male's single, extraordinarily long tusk. The narwhal has only two teeth, upper incisors. The tusk is an incisor tooth, typically the left one that projects from the upper jaw and has a groove that forms a left-handed helix. The tusk may be 2.4 to three meters (eight to ten feet) long (compared with a body length of four to six meters, or 13 to 16 feet) and weigh up to ten kilograms (22 pounds). About one in 500 males has two tusks, which occurs when the right incisor, normally small, also grows out. Occasionally a female narwhal may also produce a tusk, and there is a single recorded case of a female with dual tusks (Carwardine 1995).

The purpose of the tusk is unknown, though various explanations have been proposed. One explanation suggested is that the tusk is used to pierce the ice covering the narwhal's Arctic Sea habitat (Broad 2005). Another suggestion is that the tusk is used in echolocation. (Echolocation is an ability held by the toothed whales.) Other hypothesized uses include courting females, defense, and foraging for food. In yet another theory, the tusk is primarily used for showmanship and for dominance: males with larger tusks are more likely to successfully attract a mate. This hypothesis was suggested by the activity of "tusking," in which two males rub tusks.

However, recent work by a research team strongly suggests that the tusk may in fact be a sensory organ (HMS 2005). Electron micrographs of tusks revealed ten million tiny, deep tubules extending from the tusk's surface, apparently connecting to the narwhal's nervous system (SD 2005). While such tubules are present in the teeth of many species, they do not typically extend to the surface of healthy teeth. The exact sensory purpose of the tusk remains unknown, but scientists now hypothesize that it may detect temperature, salinity, pressure, or particulate makeup of the water environment (HMS 2005).

The narwhal was one of the many species originally described by Linnaeus in his Systema Naturae. The name is based on the Old Norse word nár, meaning "corpse," in reference to the animal's pigmentation. In some parts of the world, the narwhal is colloquially referred to as the moon whale or polar whale. 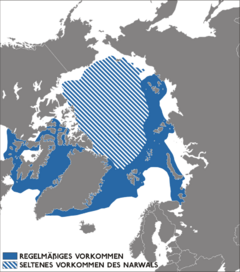 The frequent (solid) and rare (striped) occurrence of narwhal populations.

The narwhal has a disjunctive Arctic circumpolar distribution, with main concentrations in the Atlantic sector of the Arctic, from the northern Hudson Bay and Hudson Strait eastward to the Greenland Sea, and into the Russian Arctic (Jefferson et al. 2008; Grzimek et al. 2004). Individuals are commonly recorded in the northern part of Hudson Bay, Hudson Strait, and Davis Strait/Baffin Bay, off the east coast of Greenland, and in a strip running east from the northern end of Greenland round to eastern Russia (170° East). Land in this strip includes Svalbard, Franz Joseph Land, and Severnaya Zemlya. The northernmost sightings of narwhal have occurred north of Franz Joseph Land, at about 85° North latitude. Narwhals are rarely seen in Alaska, the far eastern Russian Arctic, or the western Canadian Arctic (Jefferson et al. 2008).

Narwhals tend to inhabit deep marine waters; in the summer (about two months) they spend time in the ice-free, inshore, shallow bays and fjords, while overwintering in offshore, deep, ice-covered zones along the continental slope (Jefferson et al. 2008; Grzimek et al. 2004). They migrate annually (about two months migratory time) between these two disjunctive seasonal habitats (Jefferson et al. 2008). In summer months, they move closer to coasts, usually in pods of ten to 100. As the winter freeze begins, they move away from shore, and reside in densely-packed ice, surviving in leads and small holes in the ice. As spring comes, these leads open up into channels and the narwhals return to the coastal bays. 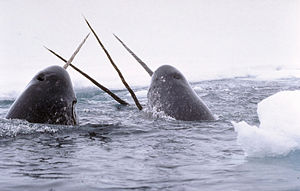 In some areas, their diet seems to have adapted to include different squid, shrimps, and various fish, such as schooling pelagics, halibuts, and redfishes. When food is scarce, narwhals will even eat baby seals.

There are indications that much of the feeding takes place in the wintering grounds, when intense benthic feeding has been documented, versus low feeding during the summer period (Jefferson et al. 2008).

Narwhals normally congregate in groups of about five to ten. Sometimes several of these groups might come together, particularly in summer when they congregate on the same coast.

While narwhals generally prefer deep waters offshore in all areas of their occurrence (Jefferson et al. 2008; Grzimek et al. 2004), they tend to stay near the surface. During a typical deep dive, the animal will descend as fast as two meters per seconds for eight to ten minutes, reaching a depth of at least 1,500 meters (5,000 feet), spending perhaps a couple of minutes at depth before returning to the surface.

At times, male narwhals rub one another's tusks together in an activity called "tusking." Because of the tusk's high sensitivity, the males may engage in tusking for its unique sensation. The tusking may also simply be a way of clearing encrustations from the sensory tubules, analogous to brushing teeth.

The main predators of narwhals include polar bears and orcas (killer whales), and sharks and walruses in Greenland (Jefferson et al. 2008).

Inuit people are allowed to hunt this whale species legally. The northern climate provides little nutrition in the form of vitamins, which can only be obtained through the consumption of seal, whale, and walrus. The livers of these animals are often eaten immediately following the killing by the hunting party in an ancient ceremony of respect for the animal. Nawhals also have been used by the Inuit for dog food and tusk ivory (Jefferson 2008)..

In Greenland, traditional hunting methods in whaling are used (such as harpooning), but high-speed boats and hunting rifles are frequently used in Northern Canada. According to Jefferson et al. (2008), narwhals have never been the target of large-scale commercial hunting, with the exception of several decades in the twentieth century in the eastern Canadian Arctic, although they have been hunted opportunistically. Today the narwhal is actively hunted only in Canada and Greenland (Jefferson et al. 2008).

In Inuit legend, the narwhal was created when a woman holding onto a harpoon had been pulled into the ocean and twisted around the harpoon. The submerged woman was wrapped around a beluga whale on the other end of the harpoon.

The narwhal as a stuffed toy in American culture.

Some medieval Europeans believed narwhal tusks to be the horns from the legendary unicorn (Daston and Park 2001). As these "horns" were considered to have magic powers, Vikings and other northern traders were able to sell them for many times their weight in gold. The tusks were used to make cups that were thought to negate any poison that may have been slipped into the drink. During the sixteenth century, Queen Elizabeth received a carved and bejeweled narwhal tusk for £10,000—the cost of a castle (approximately £1.5—2.5 million in 2007, using the retail price index (Officer 2008)). The tusks were staples of the cabinet of curiosities.

The truth of the tusk's origin developed gradually during the Age of Exploration, as explorers and naturalists began to visit Arctic regions themselves. In 1555, Olaus Magnus published a drawing of a fish-like creature with a "horn" on its forehead.

Retrieved from https://www.newworldencyclopedia.org/p/index.php?title=Narwhal&oldid=1086899
Categories:
Hidden category:
This page was last edited on 11 November 2022, at 01:26.
Content is available under Creative Commons Attribution/Share-Alike License; additional terms may apply. See Terms of Use for details.