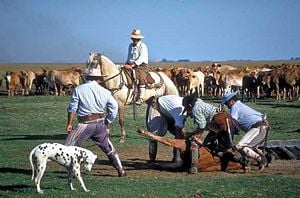 Gaucho (gaúcho in Portuguese) is a term commonly used to describe the nomadic and colorful horsemen and cowhands of the South American pampas, chacos or Patagonian grasslands, found principally in parts of Argentina, Uruguay, Magallanes Region in Chile and the state of Rio Grande do Sul in southern Brazil.

They flourished from the mid-eighteenth to the mid-nineteenth century and today remain popular folk heroes. The term also has been used to refer to cowhands and other people of Rio Grande do Sul.

Regardless of their current nostalgic popular image, Gauchos formed the bottom strata of society. They were usually mestizos (persons of mixed European and Indian ancestry) but sometimes were white, black, or mulatto. As such they were disparaged by South America’s ruling class, native-born aristocrats called criollos, who had little interest in democracy or social equality.

While the criollos despised gauchos, they found them useful. Gaucho support of Argentina’s federalists (people favoring a loose confederation with provincial self-government) in the end was instrumental in bringing to power several caudillos (military dictators). Nevertheless the Gaucho mystique, much like that of the North American cowboy, exerted a profound impact on the history, culture and national identity of South America, and that influence is still felt today.

The word gaucho is a loose equivalent to the North American "cowboy." Like cowboy, as well as such other comparable terms as the Venezuelan or Colombian llanero, the Chilean huaso, or the Mexican vaquero, the term often connotes the nineteenth century more than the present day. In the nineteenth century in parts of Central and South America, gauchos made up the majority of the rural pampas population, herding cattle and practicing agriculture as their main economic activities.

There are several conflicting hypotheses of the origin of the term. It may derive from the Quechua huachu (orphan, vagabond) or from the Arabic chaucho (a type of whip used in herding animals). The first recorded uses of the term date from around the time of Argentine independence in 1816. 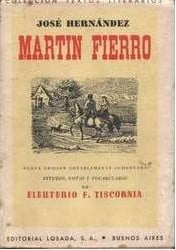 A copy of the epic Gaucho poem Martín Fierro

Gauchos were generally nomadic and lived on the pampas, the plain that extends north from Patagonia, bounded on the west by the Andes and extending as far north as the Brazilian state of Rio Grande do Sul. Most gauchos were either criollo (South Americans of Spanish ancestry) or mestizo (of mixed Spanish and Native American blood), but the term applies equally to people of other European, African, or mixed ancestry.

The gaucho plays an important symbolic role in the nationalism of this region, especially that of Argentina and Uruguay. The epic poem Martín Fierro by José Hernández used the gaucho as a symbol of Argentine national tradition, as opposed to Europeanizing tendencies, and as a symbol against corruption. The hero of the poem is drafted into the Argentine military for a border war, deserts, and becomes an outlaw and fugitive. The image of the free gaucho is often contrasted to the slaves who worked the northern Brazilian lands. Further literary descriptions can be found in Ricardo Güiraldes' Don Segundo Sombra and Los gauchos judíos, by Alberto Gerchunoff, which deals with the adaptation of Jewish immigrants to rural life in Argentina.

In the early nineteenth century the gauchos were the mainstay of the armies of the Río de la Plata region, which first had thrown off the Spanish colonial regime and had then engaged in decades-long internal struggles between rival caudillos (provincial military leaders). An unruly group of horsemen called the montonera fought in these wars, usually under the federalist caudillos of the provinces outside of Buenos Aires. 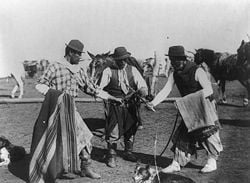 Dramatization of a fight between gauchos

Like the North American cowboys, gauchos are generally reputed to be strong, honest, silent types, but proud, and capable of violence when provoked. There is, perhaps, more of an air of melancholy about the classic gaucho than the classic cowboy. Also like the cowboy, the gauchos were great horsemen. Typically, a gaucho's horse constituted most of what he owned in the world. During the wars of the nineteenth century in the Southern Cone, the cavalries on all sides were composed almost entirely of gauchos.

The gaucho diet was composed almost entirely of beef while on the range, supplemented by yerba mate, an herbal tea-like drink rich in caffeine and nutrients. The drink remains popular in Argentina and Uruguay today. Argentine cooking draws influence from the simple but delicious recipes used in gaucho meals.

Gauchos dressed quite distinctly from North American cowboys, and used boleadoras (three leather bound rocks tied together with approximately three feet long leather straps) in addition to the familiar "North American" lariat tor riata. The typical gaucho outfit would include a poncho (which doubled as saddle blanket and also as sleeping gear), a facón (large knife), a rebenque (whip), and loose-fitting trousers called bombachas, belted with a tirador, or a chiripá, a piece of cloth used in the fashion—but not the function—of a diaper. Several of these items were British imports into the area; for example, bombachas were originally made in Turkey. In the wintertime, gauchos wore heavy wool ponchos to protect against the cold.

End of an era

By the end of the eighteenth century, private owners had acquired the half-wild livestock on the pampas and hired the gauchos as skilled animal handlers. By the later nineteenth century the pampas had been fenced into huge estancias (estates), and the old pastoral economy had given way to more intensive use of the land. Purebred animals replaced the scrub herds and alfalfa was grown to feed them. The once free-spirited gaucho thus became a farmhand or peon.

Long a part of South American folk literature, gaucho lore became the subject of some of the best verse of the nineteenth century Romantic period. A picturesque, imitation-gaucho literature, purporting to use the language of the gauchos and reflect their mentality, arose as a result of a developing evolution in the understanding of national identity. The three great figures in this trend, José Hernández, Estanislao del Campo and Hilario Ascasubi immediately became, and have remained, among the most popular figures of a whole unique genre in Argentine and Uruguayan literature, the gauchesco or "gauchoesque" style.

The influence of folk music and a countrified language has always, to some extent, been felt in popular literature, as, for example, in the folk-flavored poetry of the Uruguayan Bartolomé Hidalgo (1788-1822). And the imprint on the soul exercised by the gaucho can be felt in the work of much later writers, such as Ricardo Güiraldes, Benito Lynch, and Enrique Amorim, who loved the country scenes of Argentina and Uruguay. The imprint remains evident in even the most modern Uruguayan literature. 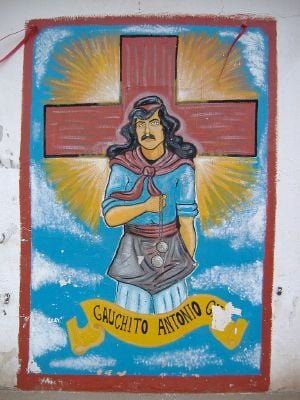 Gauchito Gil (literally "Little Gaucho Gil") is a legendary character of Argentina's popular culture. His full name was Antonio Mamerto Gil Núñez and he was allegedly born in the area of Pay Ubre, nowadays Mercedes, Corrientes, possibly in the 1840s, and died on January 8, 1878. Little is known about Antonio Gil, except that the gaucho was an outlaw who was probably executed by provincial authorities. According to legend, Gaucho Gil was a good-hearted outlaw who stole from the rich and gave to the poor. Before his hanging, Gil is said to have pledged to become a miracle worker.

Today Gauchito Gil is thought to be a saint for many people of the provinces of Formosa, Corrientes, Chaco, the north of Santa Fe and even the province of Buenos Aires.

On the eighth of January, the anniversary of Gil's death, more than 100,000 people come to visit a shrine at the place where he was allegedly executed (located about five miles from the city of Mercedes). They leave offerings and ask Gil for favors. Smaller shrines to Gauchito Gil can be seen on roadsides throughout Argentina.

While the Catholic church has not declared "Gauchito" Gil a saint, many Argentine people are promoting him as a candidate.

The style of dress associated with Gauchos has filtered into fashion in the United States. In particular, many manufacturers produce "gaucho pants," similar in appearance to capri pants but with flared legs. These pants, in their sturdier, original form, are called bombachas in the pampas, and are dressed with boots and a belt called guaiaca.

Also, the traditional poncho (a simple garment designed to keep the body warm) has been upgraded in current fashion as well. The mascot and sports teams of the University of California, Santa Barbara also borrow the term "Gaucho." Texas Tech's Masked Rider even wears a "gaucho hat."

Gaucho is also the group identification name taken by inhabitants of the Brazilian State of Rio Grande do Sul. An example is the Brazilian soccer player Ronaldinho, nicknamed by some as Ronaldinho Gaúcho, as he was born in that State. The term is also used to identify some groups of people who live in other states of the southern half of Brazil, Uruguay and northern Argentina. For those people evoking this denomination usually has the purpose of expressing the pride one has for its origins as immigrants to untouched lands and for the hard-working nature it represents. Gauchito (a boy in the Argentine colors and a gaucho hat) was the mascot for the 1978 FIFA World Cup.

Retrieved from https://www.newworldencyclopedia.org/p/index.php?title=Gaucho&oldid=1097142
Categories:
Hidden category:
This page was last edited on 23 January 2023, at 07:54.
Content is available under Creative Commons Attribution/Share-Alike License; additional terms may apply. See Terms of Use for details.