In addition to revealing a unity with other vertebrates, and support for the view that more recent creations come on the foundation of earlier forms, fingernails also are more practical for tool-wielding (and keyboard typing) humans. Beyond this, they are important culturally and aesthetically, as decoration of fingernails and toenails dates at least as far back as Ancient Egypt (Blakemore and Jennett 2001).

Parts of the nail unit 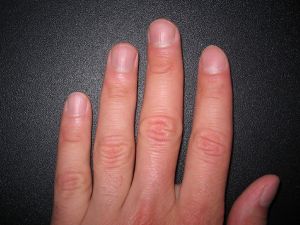 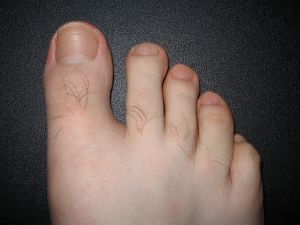 The nail unit, for both fingernails and toenails, is made up of several different structures (Levit and Boissy 2001; ND 2005):

In common usage the word nail usually refers to the nail plate only.

The growth of the nail plate begins in the germinal matrix' or nail root. The matrix is about four to nine millimeters long in humans, with most under the nail fold (Levit and Boissy 2001). The distal end is visible in most people as the lunula, particularly in the thumbs and big toes. Consisting mostly of matrix cells, the matrix gives rise to the nail plate and the nail bed.

The nail plate is composed of "closely packed, fully keratinized, multilayered lamellae of cornified cells" (Levit and Boissy 2001). Keratins are a family of fibrous structural proteins; tough and insoluble, they form the hard but non-mineralized structures found in reptiles, birds, amphibians, and mammals. Cells in the epidermis contain a structural matrix of keratin. As certain skin cells differentiate and become cornified, pre-keratin polypeptides are incorporated into intermediate filaments. Eventually the nucleus and cytoplasmic organelles disappear, metabolism ceases, and cells undergo a programmed death as they become fully keratinized. Hard structures are formed by intercellular cementing of fibers formed from the dead, cornified cells.

The nail matrix cells differentiate and create the nail plate by flattening, broadening, and by nuclear fragmentation, with an accumulation of cytoplasmic microfibrils (Levit and Boissy 2001). The keratins in the nail plate are believed to be held in place by surrounding globular matrix proteins with a high concentration of disulfide bonds between cystine (rather than by means of calcium, as in bones), creating the rigid structure (Levit and Boissy 2001).

As the matrix cells grow, the nail plate is pushed out toward the free edge. In addition, Johnson and Shuster (1993) report that the nail is formed continuously along the nail bed as well as by the germinal matrix, noting in their study that approximately 79 percent of the nail thickness was contributed by the nail matrix and 21 percent by the nail bed.

Levit and Boissy (2001) report that the nail plate of human fingernails grows at an average rate of 0.1 mm per day, with toenail growth one half of that rate. Fingernails require three to six months to regrow completely, while toenails require 12 to 18 months. The actual growth rate is dependent upon such factors as age, season, exercise level, and hereditary factors. And contrary to popular belief, they do not continue to grow after death; the skin dehydrates and tightens, giving the illusion that the nails grow. 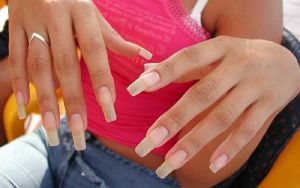 The growth record of fingernails can show the history of recent health and physiological imbalances, and has been used as a diagnostic tool since ancient times. Major illness will cause a deep groove to form across the nails. Mis-coloration, thinning, thickening, brittleness, splitting, grooves, Mees' lines, small white spots, receded lunula, clubbing (convex), flatness, spooning (concave) can indicate illness in other areas of the body, nutrient deficiencies, drug reaction or poisoning, or merely local injury. Nails can also become thickened (onychogryphosis), loosened (onycholysis), infected with fungus (onychomycosis) or degenerative (onychodystrophy). Nails can dry out, just like skin. In fact, Johnson and Shuster (1993) found that typical nail water content was constant at nine to ten percent along the nail length.

Manicures and pedicures are health and cosmetic procedures to groom, trim, and paint the nails and manage callouses. They require various tools such as cuticle scissors, nail scissors, nail clippers, and nail files.

Biting the nails often indicates internal tension, stress, boredom, hunger, or it may simply be a habit. Nail biting can result in the transportation of germs that are buried under the surface of the nail into the mouth. It may also cause excessive or abnormal wear of tooth enamel. 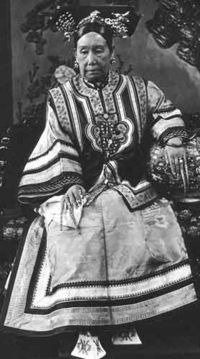 Nail decoration for aesthetic purposes, for both fingernails and toenails, dates to at least Ancient Egypt (Blakemore and Jennett (2001).

In modern western culture, long nails are a symbol of femininity, while short nails are a symbol of masculinity. However, in some Asian cultures, men may also grow long fingernails, or only the nail on the little finger, to show that they do not do much manual labor, but instead work in an office setting. In Chinese and Hindu cultures, growing long fingernails has been a traditional practice, as a sign of leisure and status, since it is difficult to practice manual labor with long fingernails (Blakemore and Jennett 2001). In the nineteenth century in the Balkans, white-collar workers, such as clerks, grew their fingernails long to distinguish them from people in lower classes who worked with their hands (Mckay 1983).

Some guitar players, notably classical and fingerstyle players, will purposely grow long nails on the hand they use to pluck the strings. Their longer nails serve as small, easily-maneuverable guitar picks. For some serious musicians, daily nail care can become a mark of pride and dedication.

In comparison, pianists must keep their nails trimmed short to avoid clicking noises on the keys and avoid dangerous situations where in fast passages the nail may be caught under a key and rip off, and most string players, such as violinists and guitarists, must keep at least the nails on their fretting hand short to allow the strings to be fingered correctly.

Painting the nails with nail polish (also known as nail lacquer) is a common practice dating back to at least 3000 B.C.E. Nail decoration is usually limited to females. Colored and clear nail polish or enamel became popular in the early twentieth century for women (Blakemore and Jennett 2001). Ornamented fake nails are sometimes used to display designs, such as stars or sparkles, on nails. They are also used to make nails look longer.

Retrieved from https://www.newworldencyclopedia.org/p/index.php?title=Nail&oldid=681762
Categories:
Hidden category:
This page was last edited on 2 April 2008, at 12:52.
Content is available under Creative Commons Attribution/Share-Alike License; additional terms may apply. See Terms of Use for details.