Bratislava is the capital of Slovakia and is its largest city, with a population of 450,000. Before 1920 it went by the German name "Pressburg." The city's position on both banks of the Danube River at the crossroads of ancient trading routes predestined it to become a meeting point of various cultures that shaped its development, including Slovaks, Germans, Hungarians, Czechs, Austrians, Jews, Croatians, and Bulgarians. Celts, Slavs, Romans, and various Germanic tribes left an imprint on its ancient past. There is a saying that a true "Pressburgian" speaks four languages: Slovak, German, Hungarian, and a combination thereof.

Bratislava was a key economic and administrative center of the Kingdom of Hungary. Subsequently as part of the Habsburg Monarchy, under Empress Maria Theresa the city enjoyed its golden era. Due to its location near Vienna, its opera house is still frequented by visitors from the Austrian capital.

In 1919 Bratislava became the capital of the independent Slovak Republic, which bolstered national consciousness and the sense of importance and sovereignty, and with the emergence of an independent republic once again in 1993, it became the seat of the president and highest executive bodies. Divided into five districts, Bratislava is the seat of the Slovak president, National Council of the Slovak Republic, and government institutions.

Bratislava is an old city which has endured the missteps and obstacles of changing times. The city has held fast, retaining her beauty and standing stoic through various trials; enduring both difficulty and glory in different times in her history. Its favorite sons include Slovak historical figures Milan Rastislav Štefánik and Alexander Dubček.

Bratislava lies on both banks of the Danube River and is the only capital in the world that borders on two neighboring countries, Austria and Hungary. It is only an hour's drive from the border with the Czech Republic. The Little Carpathians (Malé Karpaty) massif of the Carpathian Mountains range begins within its territory. The Austrian capital Vienna is only 50 km away. Two more rivers flow across the city — Morava, which forms the city's northwestern border, and the Little Danube.

Climate: The climate is mild, with frequent winds and marked variations between hot summers and cold, humid winters.

In March 1919, Bratislava was adopted as the official name; it is not known on what grounds. One theory is that the name was invented by U.S. president Woodrow Wilson, another ascribes it to the corruption of the old Slavic "Braslava." It is documented though that a variant of this name was incidentally reconstructed by Pavel Josef Šafařík in the 1830s based on the name of the Bohemian ruler Bretislav I. "Braslava" was used subsequently by members of the Slovak National Movement in the 1840s and occasionally afterwards. 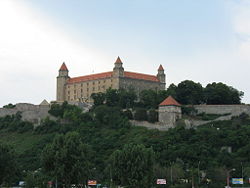 Battle of Mohacs; Capital of the Kingdom of Hungary

Napoleonic wars and beyond

Panorama of Bratislava I (from castle) 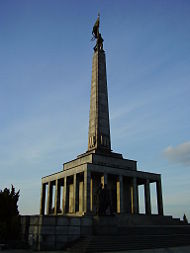 Slavín memorial honors Soviet Army soldiers who gave their lives during the liberation of Bratislava from Nazi Germany. 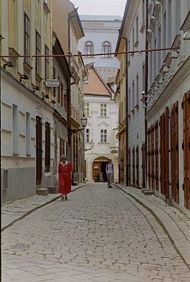 Paved street in the Old Town of Bratislava

A street in the Old Town 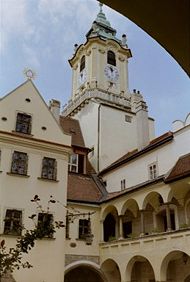 Seat of the Slovak National Theater 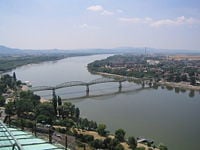 At Esztergom and Štúrovo, the Danube separates Hungary from Slovakia.

The population of Bratislava belongs to the Christian faith, with Roman Catholics making up over half the population at (56.7 percent). Lutherans of the Augsburg Confession make up (6 percent), while Greek Catholics, Reformed Christians, Eastern Orthodox and other Protestant denominations make up the remainder of the faithful.

According to the 2001 census, there were seven hundred Jews, and a high percentage of professed Atheists, 29.3 percent.

while Ice hockey: teams are:

The first university in Bratislava and also in Slovakia was the Academia Istropolitana, established in 1467.

Today, Bratislava is the seat of several colleges and universities: 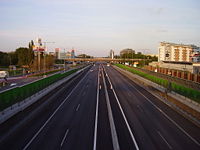 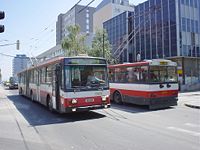 Capital cities of the European Union