The Warsaw Pact, or Warsaw Treaty Organization, officially named the Treaty of Friendship, Co-operation, and Mutual Assistance, (Russian: Договор о дружбе, сотрудничестве и взаимной помощи), was an organization of Central and Eastern European communist states. It was established on May 1, 1955, in Warsaw, Poland to counter the perceived threat from the creation of the NATO alliance, specifically the prospect of the integration of a "re-militarized" West Germany into NATO, which took place on May 9, 1955, via ratification of the Paris Peace Treaties.

The pact lasted throughout the Cold War. It began to fall apart in 1989, following the collapse of the Eastern Bloc and political changes in the Soviet Union. The treaty was signed in Warsaw on May 14, 1955, and official copies were made in Russian, Polish, Czech and German. 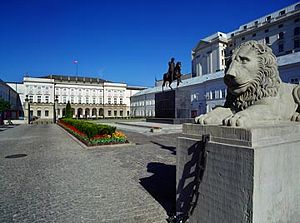 Presidential Palace in Warsaw, in 1955 known as Governor's Palace (Pałac Namiestnikowski), where the Warsaw Pact was signed

The communist states of Central and Eastern Europe were signatories except Yugoslavia. The members of the Warsaw Pact pledged to defend each other if one or more of the members were attacked. The treaty also stated that relations among the signatories were based on mutual noninterference in internal affairs and respect for national sovereignty and independence. The noninterference rule would later be de facto violated with the Soviet interventions in Hungary (Hungarian Revolution, 1956) and Czechoslovakia (Prague Spring, 1968).

Albania stopped supporting the alliance in 1961 as a result of the Sino-Soviet split in which the hard-line Stalinist government in Albania sided with China. They officially withdrew from the pact in 1968.

On September 24, 1990, East Germany signed a treaty with the Soviet Union ending East Germany's membership in the Warsaw Pact on October 3, 1990, the date of German reunification.

The Warsaw Pact was divided into two branches: the Political Consultative Committee, which coordinated all non-military activities, and the Unified Command of Pact Armed Forces, which had authority over the troops assigned to it by member states and was headed by the Supreme Commander, who at the same time was the First Deputy Minister of Defense of the U.S.S.R. The head of the Warsaw Pact Unified Staff was the First Deputy Head of General Staff of the Ministry of Defense of the U.S.S.R.[1] The Warsaw Pact's headquarters were in Moscow.

The Soviet Union claimed that the May 1955 creation of the Warsaw Pact was done in reaction to the induction of the Federal Republic of Germany into NATO in that same year. This claim's validity is weakened by the fact that at the time some senior members of all non-Soviet signatory governments were Russian military officers. The pact formalized the Soviet Union's position as head of a socialist bloc of states, and replaced bilateral relations with a multilateral framework.[2]

During the 1956 Hungarian Revolution, the Hungarian government, led by Prime Minister Imre Nagy, announced Hungary's withdrawal from the Warsaw Pact. In response, Soviet troops entered Hungary and crushed the uprising in two weeks, using the Warsaw Pact as a justification. No other Warsaw Pact countries participated in the military intervention.

Warsaw Pact forces were utilized at times, such as during the 1968 Prague Spring when they invaded Czechoslovakia to overthrow the reform movement that was being led by Alexander Dubček's government. Lieutenant General Václav Prchlík had already denounced the Warsaw Pact in a televised news conference as an unequal alliance and declared that the Czechoslovak Army was prepared to defend the country's sovereignty by force, if necessary. On August 20, 1968, a force consisting of 23 Soviet Army divisions entered Czechoslovakia. Taking part in the invasion were also one Hungarian and two Polish divisions along with one Bulgarian brigade. Romania refused to contribute troops. Two divisions of the East German National People's Army were stationed at the border with Czechoslovakia but did not participate directly in the invasion, owing to memories of Hitler's 1938 annexation of the Sudetenland and later the subjugation of the rest of Czechoslovakia in 1939. The East Germans, however, provided logistical support to the invasion and some East German forces, such as liaison officers, signal troops, and officers of the Ministry of State Security participated directly in the invasion.

This intervention was explained by the Brezhnev Doctrine, which stated:

When forces that are hostile to socialism try to turn the development of some socialist country towards capitalism, it becomes not only a problem of the country concerned, but a common problem and concern of all socialist countries.

Implicit in this doctrine was that the leadership of the Soviet Union reserved to itself the right to define "socialism" and "capitalism." Thus, "socialism" was defined according to the Soviet model, and anything significantly different from this model was considered to be a step toward capitalism.

After the invasion of Czechoslovakia, Albania protested by formally leaving the Warsaw Pact, although it had stopped supporting the Pact as early as 1962. The Romanian leader, Nicolae Ceauşescu, denounced the invasion as a violation of both international law and of the Warsaw Pact's principle of mutual non-interference in internal affairs, saying that collective self-defense against external aggression was the only valid mission of the Warsaw Pact.

NATO and the Warsaw Pact countries never engaged each other in armed conflict, but fought the Cold War for more than 35 years often through “proxy wars.” In December 1988 Mikhail Gorbachev, then leader of the Soviet Union, proposed the so-called Sinatra Doctrine which stated that the Brezhnev Doctrine would be abandoned and that the Soviet Union's European allies could do as they wished. Soon thereafter, a series of political changes swept across Central and Eastern Europe, leading to the end of European Communist states.

There are many examples of soldiers of the Warsaw Pact serving alongside NATO soldiers on operational deployments under the auspices of the United Nations, for example Canadian and Polish soldiers both served on the UNEFME (United Nations Emergency Force, Middle East—also known as UNEF II) mission, and Polish and Canadian troops also served together in Vietnam on the International Commission of Control and Supervision (ICCS).

One historical curiosity is that after German reunification in October 1990, the new united Germany was a member of NATO (East Germany's Warsaw Pact membership ended with reunification), but had Soviet (later Russian) troops stationed in its eastern territory until mid-1994.

After 1989, the new governments in Central and Eastern Europe were much less supportive of the Warsaw Pact, and in January 1991 Czechoslovakia, Hungary, and Poland announced that they would withdraw all support by July 1, 1991. In February 1991 Bulgaria followed suit and it became clear that the pact was effectively dead. The Warsaw Pact was officially dissolved at a meeting in Prague on July 1, 1991.

On May 1, 2004, the Czech Republic, Estonia, Hungary, Latvia, Lithuania, Poland, and Slovakia became members of the European Union. This group was followed in 2007 by Romania and Bulgaria.

In November 2005 Poland decided to make its military archives regarding the Warsaw Pact publicly available through the Institute of National Remembrance. About 1,300 documents were declassified in January 2006 with the remaining approximately one hundred documents being evaluated for future declassification by a historical commission. Finally, 30 were released, with 70 remaining classified as they involved issues with the current strategic situation of the Polish military. It was revealed in declassified documents that, until the 1980s, the Warsaw Pact's military plans in the case of war with the West consisted of a swift land offensive whose objective would have been to secure Western Europe quickly, using nuclear weapons if necessary. Poland itself was home to 178 nuclear assets, growing to 250 in the late 1980s. Warsaw Pact commanders made very few plans for the possibility of fighting a defensive war on their own territory.