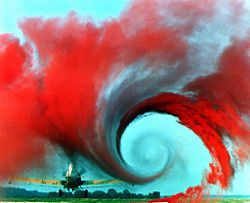 Vortex created by the passage of an aircraft wing, revealed by colored smoke.

A vortex (plural vortices) is a rapidly spinning, circular or spiral flow of fluid around a central axis. The swirling motion tends to suck everything within the fluid toward its center. The speed and rate of rotation of the fluid are greatest at the center, and decrease progressively with distance from the center. Examples of vortices range from tornados and hurricanes in the atmosphere to water flowing down a drain. The Great Red Spot on Jupiter appears to be a huge vortex.

A vortex can be observed in the spiraling motion of air or liquid around a center of rotation. The circular current of water of conflicting tides form vortex shapes. Turbulent flow makes many vortices. A good example of a vortex is the atmospheric phenomenon of a whirlwind or a tornado or dust devil. The whirling air mass mostly takes the form of a helix, column, or spiral. Tornadoes develop from severe thunderstorms, usually spawned from squall lines and supercell thunderstorms, though they sometimes happen as a result of a hurricane.

In atmospheric physics, a mesovortex is the term used for a vortex on the scale of a few miles, that is, smaller than a hurricane but larger than a tornado. On a much smaller scale, a vortex is usually formed as water goes down a drain, as in a sink or toilet. As water flows out of a small opening in the bottom of the basin or reservoir, it forms what is called a whirlpool.

A number of examples of vortices are listed below. 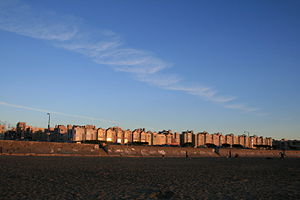 Vortices in aircraft contrails are attributed to a phenomenon known as the Crow instability (named after its discoverer S.C. Crow). The otherwise straight contrails are whirled into spirals and then donut-shaped rings.

In fluid dynamics, the strength of rotation or circulation of a vortex is called vorticity. More precisely, vorticity is the circulation per unit area at a point in the flow field. It is a vector quantity, whose direction is (roughly speaking) along the axis of the swirl. Also in fluid dynamics, the movement of a fluid can be said to be vortical if the fluid moves around in a circle, or in a helix, or if it tends to spin around some axis. Such motion can also be called solenoidal.

is defined as the curl of the fluid velocity

In fluid mechanics, a distinction is often made between two limiting vortex cases. One is called the free (irrotational) vortex, and the other is the forced (rotational) vortex. These are considered as below:

When fluid is drawn down a plug-hole, one can observe the phenomenon of a free vortex. The tangential velocity v varies inversely as the distance r from the center of rotation, so the angular momentum, rv, is constant; the vorticity is zero everywhere (except for a singularity at the center-line) and the circulation about a contour containing r = 0 has the same value everywhere. The free surface (if present) dips sharply (as r −2) as the center line is approached.

The tangential velocity is given by:

where Γ is the circulation and r is the radial distance from the center of the vortex.

In non-technical terms, the fluid near the center of the vortex circulates faster than the fluid far from the center. The speed along the circular path of flow is held constant or decreases as you move out from the center. At the same time the inner streamlines have a shorter distance to travel to complete a ring. When running a race on a circular track, would the runner rather be on the inside or outside, assuming the goal was to complete a circle? Imagine a leaf floating in a free vortex. The leaf's tip points to the center and the blade straddles multiple streamlines. The outer flow is slow in terms of angle traversed and it exerts a backwards tug on the base of the leaf while the faster inner flow pulls the tip forwards. The drag force opposes rotation of the leaf as it moves around the circle.

In a forced vortex the fluid essentially rotates as a solid body (there is no shear). The motion can be realized by placing a dish of fluid on a turntable rotating at ω radians/sec; the fluid has vorticity of 2ω everywhere, and the free surface (if present) is a parabola.

The tangential velocity is given by:

where ω is the angular velocity and r is the radial distance from the center of the vortex.