Nerve cord is a term that can refer to either (1) the single, hollow, fluid-filled, dorsal tract of nervous tissue that is one of the defining characteristics of chordates (dorsal nerve cord) and develops into the spinal cord and brain of vertebrates; or (2) the typically solid, ventral, double row of nerve fibers found in some phyla of invertebrates (ventral nerve cord).

In both cases, the term nerve cord references a bundle of nerve fibers that transverse the longitudinal axis of an animal and is an important structure of the animal's central nervous system. However, in the case of chordates, the nerve cord is tubular, hollow, fluid-filled, and runs dorsally, above the notochord and gut tract, while in the case of non-chordates it is solid and runs ventrally, below the digestive tract. They also differ in that the nerve cord of chordates forms by invagination in the embryo, whereas in non-chordates, the nerve cord does not form by invagination.

The fact that all chordates, as diverse as they are (from tunicates to hagfish to fish to birds to apes), share the presence of a dorsal nerve cord at some point in their life cycle shows the interconnectedness and unity of nature, as well as and evidence for a common descent. Likewise, the sharing of a ventral nerve cord among species of particularly invertebrate phyla shows the unity within these taxon. 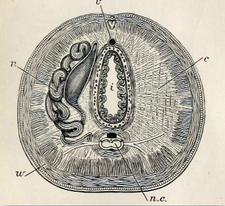 Cross section of an earthworm showing the central nerve cord (n.c.), as well as the body wall (w); membranes (c) that divide the body cavity into a series of chambers; a coiled nephridium (n); the intestine (i); and above and below it a longer blood vessel (v).

The ventral nerve cord usually consists of a pair of partially fused nerve trunks running longitudinally along the ventral plane of the animals, from the anterior to posterior (the thoracic and abdominal tagma in the arthropods). A basic structure, for example, is the scenario where each body segment is innervated by pairs of ganglia (or it can be described as each segment having one ganglia but that ganglia consists of a pair of hemiganglia on either side). Ganglia of adjacent segments are connected by nerve fibers designated as connectives (or "intersegmental connectives"). Within a segment, the hemiganglia are connected by a tract of nerve fibers, called commissures, that pass from one side to the other of the nerve cord. The complete system bears some likeness to a rope ladder.

There are different degrees of fusion of the ganglia among different taxon. In some animals, the bilateral ganglia are fused into a single large ganglion per segment. This characteristic is found mostly in the insects.

Unlike with chordates, the nerve cord in invertebrates does not develop by invagination. Rather than the cells gathering dorsally on the embryo's outer surface, folding inward, and then sinking to their final position, in the case of the ventral nerve cord's formation, the cells commonly move inward to the internal position individually (Campbell et al. 2013).

Chordata is broken down into diverse subphyla, commonly the three subphyla of Urochordata (tunicates), Cephalochordata (lancelets or amphioxus), and Vertebrata (although the hagfish, which lack vertebrae, are sometimes not classified in Vertebrata but their own subphylum of Myxini and in some taxonomies the subphlyum Craniata is used to include hagfish and other vertebrates). Urochordate larvae have a nerve cord and a notochord but these are lost in adulthood. Cephalochordates have a nerve cord and a notochord but no vertebra. In all vertebrates, except for hagfish, the dorsal hollow nerve cord has been surrounded with cartilaginous or bony vertebrae and the notochord generally reduced. (Unlike vertebrates, tunicates and cephalochordates lack any kind of skull. Those with skulls, that is the vertebrates, are placed in the taxonomic group Craniata.) In the vertebrates, the embryonic dorsal nerve cord develops into a spinal cord with a brain (Towle 1989).

The dorsal nerve cord develops from a plate of dorsal ectoderm that invaginates into a hollow, fluid-filled tube. Essentially, the neural tissue, which concentrates above the developing notochord on the embryo's outer surface, folds into a hollow, neural tube, and then sinks to arrive at its internal position (Campbell et al. 2013).