The hindbrain can be subdivided in a variable number of transversal swellings called rhombomeres. In the human embryo eight rhombomeres can be distinguished, from caudal to rostral: Rh8-Rh1. Rostrally, the isthmus rhombencephali demarcates the boundary with the midbrain or mesencephalon.

With the hindbrain evident in casts of 500-million-year-old fossils of jawless fish, and all extant vertebrates showing the same basic hindbrain structure (with only agnathans evidently lacking the cerebellum), one can see exhibited both the unity of nature and evidence of newer forms coming on the foundation of earlier forms. However, the proportions of hindbrain, midbrain, and forebrain also differ considerably among the vertebrates, with the hindbrain the largest portion in fishes and the forebrain playing the more dominant role in terrestrial vertebrates.

A rare disease of the rhombencephalon, "rhombencephalosynapsis," is characterized by a missing vermis resulting in a fused cerebellum. Patients generally present with cerebellar ataxia. 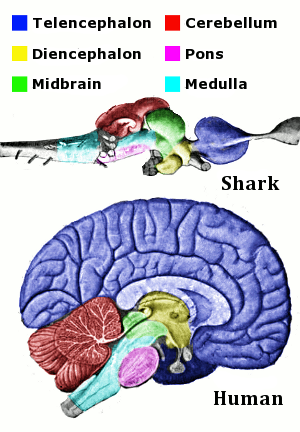 The main anatomical regions of the vertebrate brain, shown for shark and human. The same parts are present, but they differ greatly in size and shape.

Vertebrate brains are characterized by three primary divisions: forebrain (or prosencephalon), midbrain (or mesencephalon), and hindbrain (or rhombencephalon). These divisions are discerned even in fossils of agnathans (jawless fish, which today are represented by lampreys and hagfish) from 500 million years ago (Raven et al. 2008).

The forebrain is dominant in terrestrial vertebrates, where it is the center of the processing sensor information. The forebrain of reptiles, amphibians, birds, and mammals is commonly divided into two regions: the "diencephalon," which consists of the hypothalamus and the thalamus, and the "telencephalon," or "end brain," which in mammals is called the cerebrum (Raven et al. 2008). The telencephalon also is the term used to refer to the embryonic structure from which the mature cerebrum develops.

The midbrain or mesencephalon is primarily is composed of the optic tectum, which processes and receives visual information.

Developmentally, the hindbrain also can be subdivided into the myelencephalon, which is the area that gives way to development of the medulla oblongata, and the metencephalon, which gives rise to the pons and the cerebellum.

The hindbrain was the major component of early brains, as seen via casts of fossil agnathans, and remains the major part of fish brains today. However, the cerebellum of the hindbrain is lacking in both hagfishes and lampreys (Northcutt 2002). In advanced vertebrates, the cerebellum is larger than in fishes and plays an increasingly important role as a movement coordinating center (Raven et al. 2008). In fishes, the hindbrain is also the largest portion of the three regions (forebrain, midbrain,and hindbrain), while in terrestrial vertebrates, the forebrain has the more dominant role (Raven et al. 2008).

The hindbrain is homologous to a part of the arthropod brain known as the sub-oesophageal ganglion, in terms of the genes that it expresses and its position in between the brain and the nerve cord (Ghysen 2003). On this basis, it has been suggested that the hindbrain first evolved in the Urbilaterian—the last common ancestor of chordates and arthropods—between 570 and 555 million years ago (Ghysen 2003; Haycock 2011).

The myelencephalon is a subdivision of the brain used to describe the area that gives way to development of the medulla oblongata. Often referred to simply as the medulla, the medulla oblongata is the lower half of the brainstem and along with the spinal cord contains many small nuclei involved in a wide variety of sensory and motor functions (Kandel et al. 2000). The medulla contains the cardiac, respiratory, vomiting, and vasomotor centers and deals with autonomic, (involuntary) functions, such as breathing, heart rate, and blood pressure, as well as basic reflexive activities (coughing, sneezing, swallowing, vomiting) (Loewy and Spyer 1990). .

During fetal development in humans, divisions that give rise to the hindbrain occur at just 28 days post conception with more specific subdivisions (metencephalon, myelencephalon) taking shape at 7 weeks post conception. Final shape differentiation into the medulla oblongata can be observed at 20 weeks gestation (Carlson 2013).

Because of its location at the brain stem, trauma to this area can be detrimental to survival of any kind. Research shows lesions resulting from trauma can cause pulmonary edemas due to the medullas association with pulmonary function (Matsuyama et al. 2007). Similarly, ischemia can also result from lesions to the medulla affecting vasomotor function (Kumada et al. 1979). 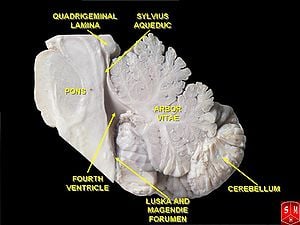 The pons lies in the brainstem directly above the medulla and contains nuclei that control sleep, respiration, swallowing, bladder function, equilibrium, eye movement, facial expressions, and posture (Siegel and Sapru 2010). The pons regulates breathing through particular nuclei that regulate the breathing center of the medulla oblongata.

The cerebellum plays an important role in motor control. It may also be involved in some cognitive functions such as attention and language, and in regulating fear and pleasure responses, but its movement-related functions are the most solidly established. The cerebellum does not initiate movement, but it contributes to coordination, precision, and accurate timing. Removal of the cerebellum does not prevent an animal from doing anything in particular, but it makes actions hesitant and clumsy. This precision is not built-in, but learned by trial and error. Learning how to ride a bicycle is an example of a type of neural plasticity that may take place largely within the cerebellum (Kandel et al. 2000).

At the early stages of brain development, the brain vesicles that are formed are imperative. Each brain region is characterized by its own specific architecture. These regions of the brain are determined by a combination of transcription factors and the signals that change their expression (Nakamura and Watanabe 2005).

The isthmus is the main organizing center for the tectum and the cerebellum (Matsunaga et al. 2002). The tectum is the dorsal part of the metencephalon. The tectum includes the superior and inferior colliculli, which play a part in visual and audio processing. Two of the major genes that affect the metencephalon are Fgf8 and Wnt1, which are both expressed around the isthmus. Fgf8 is also known as Fibroblast Growth Factor 8. It is a protein that is widely thought to be the most important organizing signal. Its main function is to set up and maintain the barrier between the midbrain and hindbrain, specifically between the mesencephalon and metencephalon (Matsunaga et al. 2002). It also plays a large role in deciding the structure of the mid- and hindbrain. Wnt1 is a proto-oncogene protein (Wingless-type MMTV integration site family, member 1). This gene was originally thought to play a role in the development of the midbrain and hindbrain, but studies have shown that this may not be the case (Matsunaga et al. 2002). Wnt1 is thought to be behind the genetic disorder called Joubert Syndrome, a disorder that affects the cerebellum.