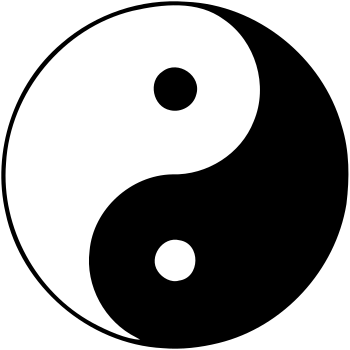 The concept of yin and yang (Pinyin: yīnyáng; Traditional Chinese: 陰陽; Simplified Chinese: 阴阳; pinyin: yīnyáng; Korean: Um-yang; Vietnamese: Âm-Dương) originates in ancient Chinese philosophy and metaphysics, and is used to describe two primal opposing but complementary forces found in all things in the universe. Yin, the darker element, is passive, dark, feminine, downward-seeking, and corresponds to the night; yang, the brighter element, is active, light, masculine, upward-seeking and corresponds to the day. Yin and yang can be used to describe seasonal changes and directions, and can also be seen as a process of transformation. The concept probably originated to ancient agrarian religion; it exists in Confucianism, and it is prominent in Daoism. In traditional Chinese medicine, the "yang" organs meridian has a downward flow of energy (ch’i) and the "yin" organs meridian has an upward flow. An imbalance of the yin-yang ratio can cause illness.

The earliest Chinese characters for yin and yang are found in inscriptions made on “oracle bones” (animals shoulder blades and turtle carapaces used in ancient Chinese divination). In these inscriptions, "yin" and "yang" refer to natural phenomena such as weather conditions, especially the movement of the sun. There is sunlight during the day ("yang") and a lack of sunlight at night ("yin"). According to the earliest comprehensive dictionary of Chinese characters (ca. 100 C.E.), Xu Shen’s Shuowen jiezi (Explaining Single-component Graphs and Analyzing Compound Characters), "yin" refers to “a closed door, darkness and the south bank of a river and the north side of a mountain.” "Yang" refers to “height, brightness and the south side of a mountain.”[1]

The concept of yin and Yang probably arose from ancient agrarian religion and the daily life of peasant farmers, which centered around the sun. Daylight was the time for work, night was for rest. Yang (dong) represents movement, yin (jing) represents rest. The two characters were not associated in their earliest usages. The two characters first appear in writing together in a verse from the Shijing (Book of Songs), a compilaton of poems from the Zhou Dynasty (1027-771 B.C.E.) through the Spring and Autumn Period (770-476 B.C.E.): “Viewing the scenery at a hill, looking for yinyang.” The phrase describes the effect of sunlight and shadow falling simultaneously on the hill.[1]

Hsi tz'u, or “Appended Explanations” (c. fourth century B.C.E.), an appendix to the I Ching (Classic of Changes), contains the phrase, “One [time] Yin, one [time] Yang, this is the Tao.”

The concept is called yin yang, not yang yin, because the former has a preferred pronunciation in Chinese, and the word order has no cultural or philosophical meaning.

The concept of Yinyang (yin-yang) has been shared by different schools of Chinese philosophy throughout history, though it was interpreted and applied by them in different ways. The term is used in three general contexts: to describe the relationships existing within and between the body and mind, nature and man, and nature and all existence; to speak of the jiao (interaction) between the waxing and waning of the cosmic and human realms; and to explain the process of harmonization which ensures a constant, dynamic balance of all things. In none of these conceptions can yin be considered metaphysically separated and distinct from yang (or vice versa), nor is one thought to be superior to or more valuable than the other. Yin and yang are equally important, unlike the dualism of good and evil. Neither can exist without the other.

The concept of yin-yang exists in Confucianism, and is prominent in Daoism. Though the words yin and yang only appear once in the Dao De Jing, the book is full of examples and clarifications of the concept of mutual arising. The Taoist treatise Huai-nan-tzu (Book of “Master Huai-nan”) describes how the one “Primordial Breath” (yüan ch'i) split into the light ethereal Yang breath, which formed Heaven; and the heavier, cruder Yin breath, which formed Earth. The interactions of Yin and Yang then produced the Ten Thousand Beings.

Yin and yang can be used to describe seasonal changes and directions, or the cycle of a day, with yang as full noon, changing to yin at sunset, becoming full yin at midnight, and changing to yang again at sunrise. South and summer are full yang; west and autumn are yang turning to yin; north and winter are full yin, and east and spring are yin turning to yang.

Yin and yang can also be seen as a process of transformation which describes the changes between the phases of a cycle. For example, cold water (yin) can be boiled and eventually turn into steam (yang).

The symbol shown at the top right corner of this page, called Taijitu (太極圖), is a well-known Chinese Yin Yang symbol. Together, the symbolic colors of yin and yang, black (symbolising darkness, the absence of light) and white (symbolising light) respectively, are combined into a circle that symbolizes Daoism for many: the tàijíbāguàtú (太極八卦圖) (simplified Chinese 太极八卦图), often known as the Tai Ji symbol or the Pictogram of the Supreme Ultimate. This graphical representation is of a far more recent date than the word pair itself. Its Unicode code is U+262F (☯). Each side contains the seed of its opposite. It is sometimes called the Tai-Chi symbol, from the characters in the name of the I Ching (易經,"The Book of Changes"). The first Chinese character, 易 (yì), meaning “ease” or “change” derives from an older symbol combining the sun (top) and moon (bottom). The combination of sun and moon represents that observation that the universe is always changing.[2]

A common mythological animal pairing that represents yin and yang metaphorically are the dragon (representing yang) and phoenix (yin) often found as a decorative motif in modern Chinese restaurants. 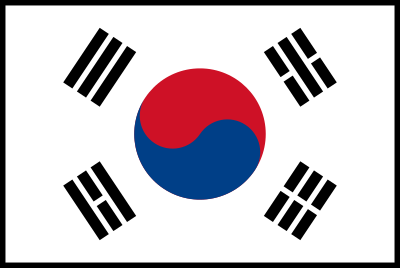 The flag of South Korea

The School of Naturalists or Yin-yang (陰陽家/阴阳家; Yīnyángjiā; Yin-yang-chia; "School of Yin-Yang") was a Warring States era philosophy that synthesized the concepts of yin-yang and the Five Elements. Zou Yan (Tsou Yen) is considered its founder. According to his system, nature consisted of changing combinations of the Five Agents (metal, wood, water, fire, earth), which were governed by the cosmic principles of Yin (Earth, female, passive, absorbing) and Yang (Heaven, male, active, penetrating). The five elements destroyed and succeed one another in a cyclic process, which also gave rise to the seasons and different dynasties.

According to the historian Sima Qian (Ssu-ma Tan, ca. 110 B.C.E.), the Yinyang school was concerned with methods of divination or astronomy and the calendrical arts (which entailed study of the four seasons, eight locations, twelve du measures and twenty-four shijie time periods).[2]

Did you know?
Yin and yang are complementary, interdependent opposites, neither of which can exist without the other; each contains a seed of the other within it

Everything can be described as either yin or yang:

1. Yin and yang are opposites. Everything has its relative opposite. Not one thing is completely yin or completely yang; each contains the seed of its opposite. For example, winter eventually turns into summer.
2. Yin and yang are interdependent. One cannot exist without the other.
3. Yin and yang can be further subdivided into yin and yang. Any yin or yang aspect can be further subdivided into yin and yang. For example, temperature can be seen as either hot (yang) or cold (yin). However, hot can be further divided into warm or burning; cold into cool or icy. Within each spectrum, there is a smaller spectrum; every beginning is a moment in time, and has a beginning and end, just as every hour has a beginning and end.


4. Yin and yang consume and support each other. Yin and yang are usually held in balance—as one increases, the other decreases. However, imbalances can occur. There are four possible imbalances: excess yin, excess yang, yin deficiency, yang deficiency.


6. Part of yin is in yang and part of yang is in yin. The dots in each side of the yin-yang symbol serve as a reminder that there are always traces of one in the other. For example, there is always light within the dark (e.g., the stars at night), these qualities are never completely one or the other. The flag of Mongolia

Yin and yang can also be used (in conjunction with other characters) to indicate various parts of the male and female anatomy.

According to Traditional Chinese Medicine, within every body whether yang (masculinity) or yin (femininity) is dominant, each of the five elements has a pair of organs assigned to it, one yin and one yang. The yang organs' meridian has a downward flow of energy (ch’i) and the yin has an upward flow. An imbalance of the yin-yang ratio can cause illness. Every individual needs to achieve this balance according to his or her own constitution, climate, season, occupation and even emotional environment. When in perfect health, the individual should be able to adapt to any of the inevitable changes of life.

Over the centuries, the study of the interplay between these principles has also led to the formulation and refinement of several systems of martial arts across East Asia.