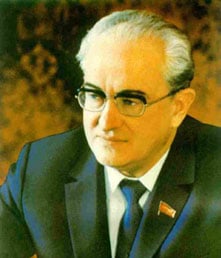 Yuri Vladimirovich Andropov (Russian: Ю́рий Влади́мирович Андро́пов) (O.S. June 2) (June 15, 1914 – February 9, 1984) was a Soviet politician and General Secretary of the Communist Party of the Soviet Union of the Communist Party from November 12, 1982, until his death just 16 months later. Andropov, effectively, was a caretaker leader. He had neither the energy nor vision to carry out the reforms he knew to be necessary if the Soviet Union was to survive. The Cold War, though he did not know this, was being lost, and the USSR had to devote less money and energy to military matters, and more to achieving a decent standard of living for its peoples. The unwinable war in Afghanistan continued to drain the economy. Some think that his ideas found fruit in the policies that eventually saw the reform of the Soviet Union under Mikhail Gorbachev. Nonetheless, Andropov was more interested in saving the existing system than in change or reform.

Andropov was the son of a railway official and was probably born in Nagutskoye, Stavropol Guberniya, Russia. Both of his parents died early, and he went to work at the age of 14. He was briefly educated at the Rybinsk Water Transport Technical College before he joined the Komsomol in 1930. He became a member of the Communist Party of the Soviet Union (CPSU) in 1939, and was first secretary of the Komsomol in the Soviet Karelo-Finnish Republic from 1940-44. During World War II, Andropov took part in partisan guerrilla activities. He moved to Moscow in 1951, and joined the party secretariat. In 1954, he became the Soviet Ambassador to Hungary. Andropov was one of those responsible for the Soviet decision to invade Hungary during the 1956 Hungarian Revolution.

Director of the KGB

During the Prague Spring events in Czechoslovakia, Andropov was the main proponent of the "extreme measures." He ordered the fabrication of false intelligence not only for public consumption, but also for the Soviet Politburo. "The KGB whipped up the fear that Czechoslovakia could fall victim to NATO aggression or to a coup." At this moment, Soviet intelligence officer Oleg Kalugin reported from Washington that he gained access to "absolutely reliable documents proving that neither the CIA nor any other agency was manipulating the Czechoslovak reform movement." However, his message was destroyed because it contradicted the fabrications concocted by Andropov. Andropov ordered a number of active measures against Czechoslovak reformers.

Suppression of the Soviet dissident movement

Andropov was apparently obsessed with "the destruction of dissent in all its forms" and always insisted that "the struggle for human rights was a part of a wide-ranging imperialist plot to undermine the foundation of the Soviet state." In 1968, he issued a KGB Chairman's order, "On the tasks of State security agencies in combating the ideological sabotage by the adversary," calling for struggle against dissidents and their imperialist masters. The brutal repression of dissidents included plans to maim the dancer Rudolf Nureyev, who had defected in 1961.

In 1973, Andropov was promoted to full member of the Politburo. Andropov played the dominant role in the decision to invade Afghanistan in 1979. He insisted on the invasion, although he expected that the international community would blame the USSR for this action; the decision led to the Soviet war in Afghanistan (1979-88).

Andropov was the longest-serving KGB chairman and did not resign as head of the agency until May 1982, when he was again promoted to the Secretariat to succeed Suslov as secretary responsible for ideological affairs. Two days after Brezhnev's death, on November 12, 1982, Andropov was elected General Secretary of the CPSU being the first former head of the KGB to assume the top post. His appointment was received in the West with apprehension, in view of his roles in the KGB and in Hungary. At the time his personal background was a mystery in the West, with major newspapers printing detailed profiles of him that were inconsistent and in many cases fabricated.

During his rule, Andropov attempted to improve the economy by raising management effectiveness without changing the principles of socialist economy. In contrast to Brezhnev's policy of avoiding conflicts and dismissals, he began to fight violations of party, state and labour discipline, which led to significant personnel changes. During his 15 months in office, Andropov dismissed 18 ministers, 37 first secretaries of obkoms, kraikoms and Central Committees of Communist Parties of Soviet Republics; criminal cases against highest party and state officials were begun. For the first time, the facts about economic stagnation and obstacles to scientific progress were made available to the public and criticized.

In foreign policy, the war continued in Afghanistan. Andropov's rule was also marked by deterioration of relations with the United States. U.S. plans to deploy Pershing missiles in Western Europe in response to the Soviet SS-20 missiles were contentious. But when Paul Nitze, the American negotiator, suggested a compromise plan for nuclear missiles in Europe in the celebrated “walk in the woods” with Soviet negotiator Yuli Kvitsinsky, the Soviets never responded. Kvitsinsky would later write that, despite his own efforts, the Soviet side was not interested in compromise, instead calculating that peace movements in the West would force the Americans to capitulate.

In August 1983 Andropov made a sensational announcement that the country was stopping all work on space-based weapons.

An unusual act was his response to a letter from an American child named Samantha Smith, inviting her to the Soviet Union. This resulted in Smith becoming a well-known peace activist. Meanwhile, Soviet-U.S. arms control talks on intermediate-range nuclear weapons in Europe were suspended by the Soviet Union in November 1983 and by the end of 1983, the Soviets had broken off all arms control negotiations.

Cold War tensions were exacerbated by the deliberate downing by Soviet fighters of a civilian jet, Korean Air Lines (KAL) flight 007, that had strayed over the Soviet Union on 1 September 1983. All 269 passengers and crew were killed, including one U.S. congressman. Andropov was advised by his Defense Minister, Dmitri Ustinov, and by the head of the KGB, Victor Chebrikov, to keep secret the fact that the Soviet Union held in its possession the sought-after "black box" from KAL 007. Andropov agreed to this and the ruse continued until Russian President Boris Yeltsin disclosed the secret in 1992.

Andropov died of kidney failure on February 9, 1984, after several months of failing health, and was succeeded by Konstantin Chernenko. He is buried in Moscow, in the Kremlin Wall Necropolis.

Andropov's legacy remains the subject of much debate in Russia and elsewhere, both among scholars and in the popular media. He remains the focus of television documentaries and popular non-fiction, particularly around important anniversaries. As KGB head, Andropov was ruthless against dissent, and author David Remnick, who covered the Soviet Union for the Washington Post in the 1980s, called Andropov "profoundly corrupt, a beast." Alexander Yakovlev, later an adviser to General Secretary Mikhail Gorbachev, said "In a way I always thought Andropov was the most dangerous of all of them, simply because he was smarter than the rest." However, it was Andropov himself who recalled Yakovlev back to high office in Moscow in 1983 after a ten year de facto exile as ambassador to Canada after attacking Russian chauvinism.

According to his former subordinate Securitate general Ion Mihai Pacepa,

In the West, if Andropov is remembered at all, it is for his brutal suppression of political dissidence at home and for his role in planning the 1968 invasion of Czechoslovakia. By contrast, the leaders of the former Warsaw Pact intelligence community, when I was one of them, looked up to Andropov as the man who substituted the KGB for the Communist party in governing the Soviet Union, and who was the godfather of Russia's new era of deception operations aimed at improving the badly damaged image of Soviet rulers in the West.

Despite Andropov's hard-line stance in Hungary and the numerous banishments and intrigues for which he was responsible during his long tenure as head of the KGB, he has become widely regarded by many commentators as a purist communist reformer, especially in comparison with the stagnation and corruption during the later years of his predecessor, Leonid Brezhnev. Andropov, "a throwback to a tradition of Leninist asceticism," was appalled by the corruption during Brezhnev's regime, and ordered investigations and arrests of the most flagrant abusers. The investigations were so frightening that several members of Brezhnev's circle "shot, gassed or otherwise did away with themselves." He was certainly generally regarded as inclined to more gradual and constructive reform than was Gorbachev; most of the speculation centers around whether Andropov would have reformed the USSR in a manner which did not result in its eventual dissolution.

The short time he spent as leader, much of it in a state of extreme ill health, leaves debaters few concrete indications as to the nature of any hypothetical extended rule. However, it is clear that Andropov had made known he wanted Mikhail Gorbachev to be his direct inheritor, but that other party leaders obstructed the implementation of his wish upon Andropov's death. Politburo member Konstantin Chernenko succeeded Andropov, but Gorbachev succeeded him only a year later.

Andropov lived at 26 Kutuzovski Prospekt, the same building that Suslov and Brezhnev also lived in. He was first married to Nina Ivanovna. She bore him a son who died in mysterious circumstances in the late 1970s. He met his second wife, Tatyana Filipovna, during World War II in the Karelian front when she was Komsomol secretary. Tatyana became ill and died in November 1991. Andropov had also a son, Igor (died June 2006) and a daughter, Irina (born 1946).

Recently declassified secret files of Andropov showed that he "adapted" his biography to the demands of the Bolshevik times—he made himself a son of an Ossetian proletarian, while he was actually from a rich bourgeoisie family, probably with Jewish roots. At the beginning, Andropov, according to the files, was not very accurate while inventing his family's "proletarian" past. He was questioned at least four times in the 1930s because of the discrepancies in several forms he filled.

Each and every time he managed to fool commissions that checked his background. The final version of his biography stated that he was the son of a railway official and was probably born in Nagutskoye, Stavropol Guberniya, Russia. But as the top secret archives showed, Andropov was born into a wealthy Jewish family—the Fleckensteins in Moscow. His family, which allegedly arrived in Russia from Finland, may have been dealing in jewelry and watches, and suffered from "pogroms" during WWI. One of the most interesting details is that Andropov (whose first name originally was Grigory and not Yuri), was born only a few hundred meters from the Lubyanka—the Soviet (and now Russian) secret police headquarters in Moscow, Itogi reports.