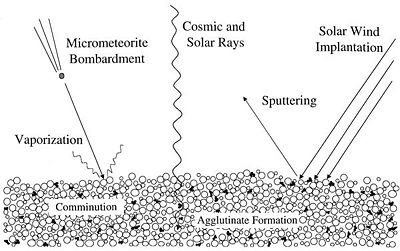 Space weathering is a term used for a number of processes that act on any celestial body exposed to the harsh space environment. Airless bodies—including the Moon, Mercury, asteroids, comets, and some of the moons of other planets—are exposed to galactic and solar cosmic rays; irradiation, implantation, and sputtering from solar wind particles; and bombardment by all sizes of meteorites and micrometeorites. These processes significantly affect the physical and optical properties (especially the color) of the surface of many planetary bodies. It is therefore critical to understand the effects of space weathering, to properly interpret our remotely sensed data.

History: Space weathering on the Moon 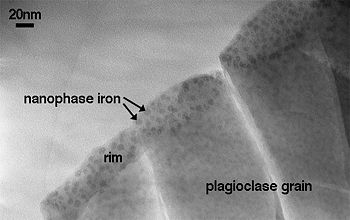 A grain of lunar soil 10084, when examined with a transmission electron microscope, shows a space-weathered rim containing nanophase iron

Much of our knowledge of the space weathering process comes from studies of lunar samples returned by the Apollo program, particularly lunar soils, or regolith. The continual impacts of high-energy particles, micrometeorites, and larger meteorites act to comminute (pulverize), melt, sputter, and vaporize components of the lunar soil, as well as to "garden" (overturn) it.

The first products of space weathering that were recognized in lunar soils were agglutinates. Agglutinates are created when micrometeorites melt a small amount of material that incorporates glass and mineral fragments, forming a glass-welded aggregate ranging in size from a few micrometers to a few millimeters. Agglutinates appear black to the human eye, largely due to the presence of nanophase iron (nanoparticles of iron). Agglutinates are very common in lunar soil, accounting for as much as 60–70 percent of mature soils.

Space weathering also produces surface-correlated products on individual soil grains, such as glass splashes; implanted hydrogen, helium, and other rare gases; solar flare tracks; and accreted components, including nanophase iron. It was not until the 1990s that improved instruments and techniques revealed that very thin (60–200 nanometer) patinas (or rims) develop on individual lunar soil grains. These patinas have been attributed to the redeposition of (a) vapor from nearby micrometeorite impacts and (b) material sputtered from nearby grains.[1] These weathering processes have large effects on the spectral properties of lunar soil, particularly in the ultraviolet, visible, and near infrared regions of the spectrum. This type of phenomenon was predicted as early as the 1960s by Bruce Hapke.[2]

On the other hand, Sho Sasaki's group, using pulse-laser irradiation, has performed experiments simulating the space weathering of surfaces without regolith.[4] They succeeded in space-weathering rock chip surfaces of meteorites.[5] 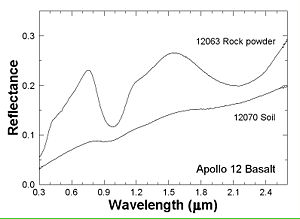 The spectral effects of space weathering are threefold: as a surface matures, it becomes darker (the albedo, or reflective power, is reduced), redder (reflectance increases with increasing wavelength), and the depth of its diagnostic absorption bands is reduced.[7] These effects are largely due to the presence of nanophase iron in the agglutinates and accreted rims of individual grains. The darkening effects of space weathering are readily seen by studying lunar craters. Young, fresh craters have bright ray systems, indicating the exposure of fresh, unweathered material. Over time, those rays disappear, as the weathering process darkens the material.

Space weathering is also thought to occur on asteroids, though the environment is quite different from that on the Moon. Impacts in the asteroid belt are slower, therefore creating less melt and vapor. Also, fewer solar wind particles reach the asteroid belt. Finally, the higher rate of impactors and lower gravity of the smaller bodies means that there is more overturn on the surface, and the surface exposure should be younger than the lunar surface. In other words, space weathering would be expected to occur more slowly and to a lesser degree on the surfaces of asteroids. However, meteorite parent bodies rich in metallic iron may accentuate the patterns of space weathering because their impact vapor would contain more iron. 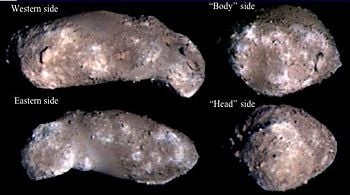 False-color map of asteroid Itokawa taken by the spacecraft Hayabusa.[8] Darker and redder areas are more space-weathered than brighter and bluer areas.

Binzel et al.[9] have discovered varying degrees of spectral redness among near-Earth asteroids, ranging from spectra similar to ordinary chondrite to spectra resembling the main-belt S asteroids. The space-weathering effect starts to accumulate when the asteroid diameter is around two kilometers and saturates when the diameter is around five kilometers.

Spacecraft Galileo's flybys of asteroids Gaspra and Ida showed spectral differences at fresh craters, providing evidence of regolith alteration. With time, the spectra of Ida and Gaspra appeared to redden and lose spectral contrast. More recently, the spacecraft NEAR Shoemaker took X-ray measurements of the near-Earth asteroid Eros. The data indicate an ordinary chondrite composition despite a red-sloped, S-type spectrum, suggesting that some process has altered the optical properties of the surface.

Between September and December 2005, the spacecraft Hayabusa rendezvoused with asteroid Itokawa and revealed the first-ever developing stage of space weathering on the asteroid.[10] Itokawa, which is 550 meters in diameter, showed large variations in the extent of space weathering[9].

The environment on Mercury also differs substantially from that on the Moon. For one thing, it is significantly hotter in the daytime (diurnal surface temperature is about 100 °C on the Moon, and about 425 °C on Mercury) and colder at night, and these temperature differences may influence the types of products of space weathering. In addition, Mercury experiences increased bombardment by micrometeorites, and its location in the solar system and greater mass involve higher velocity impacts. Based on these factors, Mercury is much more efficient than the Moon in generating both melt and vapor. Per unit area, impacts on Mercury are expected to produce 13.5 times the melt and 19.5 times the vapor produced on the Moon.[11] Moreover, researchers think that agglutinitic, glass-like deposits and vapor-deposited coatings should be produced significantly faster and more efficiently on Mercury than on the Moon.

The ultraviolet/visible spectrum of Mercury, as observed telescopically from Earth, is roughly linear, with a red slope. There are no absorption bands related to iron-bearing minerals, such as pyroxene. This suggests that either there is no iron on the surface of Mercury, or iron in minerals has been weathered to nanophase iron (which would not be detectable). A weathered surface would explain the reddened slope[3].