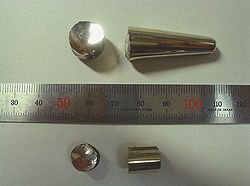 An amorphous solid is a solid in which there is no long-range order or repeating pattern in the positions of its atoms or molecules. On the other hand, if there is long-range atomic order, the solid is described as crystalline or morphous.

Most classes of solid materials can be found or prepared in an amorphous form. Examples of amorphous solids include window glass, many polymers (such as polystyrene), and the silicon in many thin-film solar cells. Even foods such as cotton candy are amorphous solids.

An amorphous material is often prepared by cooling its molten state rapidly. The cooling reduces the mobility of the material's atoms and molecules before they can pack into a thermodynamically more favorable crystalline state.

Amorphous materials can also be produced by additives that interfere with the ability of the primary constituent to crystallize. For example, the addition of sodium carbonate (soda) to silicon dioxide results in window glass, and the addition of glycols to water results in a vitrified solid.

Some materials, such as metals, are difficult to prepare in an amorphous state. Unless a material has a high melting temperature (as ceramics do) or a low crystallization energy (as polymers tend to), cooling must be done extremely rapidly.

A glass may be defined as an amorphous solid that is usually produced by mixing silica (silicon dioxide) with other chemicals at high heat, and allowing the mixture to cool without forming a crystalline structure. Ordinary, soda-lime glass, used for windows and drinking containers, is created by adding soda and lime (calcium oxide) to silicon dioxide. Without these additives, silicon dioxide will (with slow cooling) form quartz crystals, not glass.

Some amorphous metallic alloys can be prepared under special processing conditions, such as rapid solidification, thin-film deposition, or ion implantation. The term "metallic glass" refers only to amorphous metallic alloys that have been rapidly solidified. Materials produced by ion implantation or thin-film deposition are technically not called metallic glasses.

Even with special equipment, such rapid cooling is required that, for most metals, only a thin wire or ribbon can be made amorphous. This is adequate for many magnetic applications, but thicker sections are required for most structural applications such as scalpel blades, golf clubs, and cases for consumer electronics.

Recent efforts have made it feasible to increase the maximum thickness of glassy castings, by finding alloys that have greater kinetic barriers to crystallization. Such alloy systems tend to have the following interrelated properties:

One such alloy is the commercial "Liquidmetal," which can be cast in amorphous sections up to an inch thick.

Techniques such as sputtering and chemical vapor deposition can be used to deposit a thin film of material onto a surface. If the surface is kept cold enough, the atoms being deposited will not, on average, have enough energy to diffuse along the surface and form ordered crystals. For every deposition technique, there is a substrate temperature below which the deposited film will be amorphous. Surface diffusion requires much less energy than diffusion through the bulk, so that these temperatures are often lower than those required to make amorphous films by ion implantation.

Toward a strict definition

It is difficult to make a distinction between truly amorphous solids and crystalline solids in which the crystal size is extremely small (less than two nanometers). Even amorphous materials have some short-range order among the atomic positions (over distances of less than five nanometers). Furthermore, in very small crystals, a large fraction of the atoms are located at or near the crystal's surface; relaxation of the surface and interfacial effects distort the atomic positions, decreasing the structural order. Even the most advanced structural characterization techniques, such as X-ray diffraction and transmission electron microscopy, have difficulty in distinguishing between amorphous and crystalline structures on these length scales.

Retrieved from https://www.newworldencyclopedia.org/p/index.php?title=Amorphous_solid&oldid=1001506
Categories:
Hidden category:
This page was last edited on 17 November 2016, at 16:22.
Content is available under Creative Commons Attribution/Share-Alike License; additional terms may apply. See Terms of Use for details.