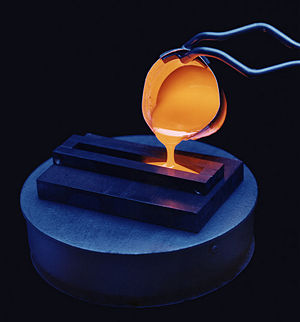 A vitrification experiment for the study of nuclear waste disposal at Pacific Northwest National Labs.

Vitrification is a process of converting a material into a glass-like amorphous solid that is free from any crystalline structure, either by the quick removal or addition of heat, or by mixing with an additive. Solidification of a vitreous solid occurs at the glass transition temperature (which is lower than melting temperature, Tm, due to supercooling).

When the starting material is solid, vitrification usually involves heating the substances to very high temperatures. Many ceramics are produced in such a manner. Vitrification may also occur naturally when lightning strikes sand, where the extreme and immediate heat can create hollow, branching rootlike structures of glass, called fulgurite. When applied to whiteware ceramics, vitreous means the material has an extremely low permeability to liquids, often but not always water, when determined by a specified test regime. The microstructure of whiteware ceramics frequently contain both amorphous and crystalline phases.

When sucrose is cooled slowly, the result is crystal sugar (or rock candy), but, when cooled rapidly, the result can be in the form of syrupy cotton candy (candyfloss). Vitrification can also occur when starting with a liquid such as water, usually through very rapid cooling or the introduction of agents that suppress the formation of ice crystals. Additives used in cryobiology or produced naturally by organisms living in polar regions are called cryoprotectants. Arctic frogs and some other ectotherms naturally produce glycerol or glucose in their livers to reduce ice formation. When glucose is used as a cryoprotectant by Arctic frogs, massive amounts of glucose are released at low temperature[1], and a special form of insulin allows for this extra glucose to enter the cells. When the frog rewarms during spring, the extra glucose must be rapidly removed from the cells and recycled via renal excretion and storage in the bladder. Arctic insects also use sugars as cryoprotectants. Arctic fish use antifreeze proteins, sometimes appended with sugars, as cryoprotectants.

Ordinary soda-lime glass, used in windows and tableware, is created by the addition of sodium carbonate and lime (calcium oxide) to silicon dioxide. Without these additives, silicon dioxide will (with slow cooling) form sand or quartz crystal, not glass.

Vitrification is a proven technique in the disposal and long-term storage of nuclear waste or other hazardous wastes.[2] Waste is mixed with glass-forming chemicals to form molten glass that then solidifies, immobilizing the waste. The final waste form resembles obsidian and is a non-leaching, durable material that effectively traps the waste inside. The waste can be stored for relatively long periods in this form without concern for air or groundwater contamination. Bulk vitrification uses electrodes to melt soil and wastes where they lie buried. The hardened waste may then be disinterred with less danger of widespread contamination. According to the Pacific Northwest National Labs, "Vitrification locks dangerous materials into a stable glass form that will last for thousands of years."[3]

Ethylene glycol is used as automotive antifreeze and propylene glycol has been used to reduce ice crystals in ice cream, making it smoother.

For years, glycerol has been used in cryobiology as a cryoprotectant for blood cells and bull sperm, allowing storage at liquid nitrogen temperatures. However, glycerol cannot be used to protect whole organs from damage. Instead, many biotechnology companies are currently researching the development of other cryoprotectants more suitable for such uses. A successful discovery may eventually make possible the bulk cryogenic storage (or "banking") of transplantable human and xenobiotic organs. A substantial step in that direction has already occurred. At the July 2005 annual conference of the Society for Cryobiology,[4] Twenty-First Century Medicine announced the vitrification of a rabbit kidney to -135°C with their proprietary vitrification cocktail. Upon rewarming, the kidney was successfully transplanted into a rabbit, with complete functionality and viability.

In the context of cryonics, especially in preservation of the human brain, vitrification of tissue is thought to be necessary to prevent destruction of the tissue or information encoded in the brain. At present, vitrification techniques have only been applied to brains (neurovitrification) by Alcor and to the upper body by the Cryonics Institute, but research is in progress by both organizations to apply vitrification to the whole body.