Swami Vivekananda (1863 – 1902) (born Narendranath Dutta) was a well-known and influential Hindu spiritual leader who played a seminal role in re-articulating Hinduism for modern times, defending Hindu beliefs from the attacks of Christian missionaries, introducing Hinduism to a North American audience, and establishing the Ramakrishna Mission to help the poor. He was the chief disciple of the Hindu saint Ramakrishna, and later became the leader of the Vedanta Society in India and abroad. He worked to combine the spirituality of Hinduism with the technological progress of the West. Influenced by Ramakrishna’s mystical teaching of seeing God in all beings, Vivekananda believed that spirituality should encompass social service toward others as a form of worship. After the death of his guru, he founded the Ramakrishna Mission, an organization which combines worship with service toward humankind.

Swami Vivekananda was born to Bengali Kayastha (in Bengal the Kayastha scribes evolved into a caste regarded as the "highest Hindu caste" alongside Brahmins) parents in Kolkata. He was given the name Narendranath Dutta. His father was a successful lawyer, and his family hoped that he would follow in his footsteps. However, his paternal grandfather was a sannyasin, or one who has renounced the world, and as a boy, Swami Vivekananda demonstrated a proclivity for this lifestyle. He was reported to have entered deep states of meditation as a boy. According to one story, at age eight, he became so immersed in meditation that he remained in a calm state even as a vicious cobra approached him. He claimed to have received visions of the Buddha and of the Hindu god Shiva, demonstrating his fascination with mendicants. Swami Vivekananda also demonstrated a high level of intelligence as a boy. He studied Western philosophy, such as Kant, as well as Eastern works, such as the Upanishads and the Brahma-sutra. Being raised in a cosmopolitan household, Swami Vivekananda demonstrated interest in culture and philosophy from European and Islamic countries, as well as India.

Did you know?
Vivekananda establishing the Ramakrishna Mission to help the poor, naming it after his guru, Ramakrishna

In 1881, Swami Vivekananda met his future guru, Sri Ramakrishna. It is widely believed that he visited Ramakrishna at the behest of a college professor, who encouraged his students to visit the saint to better understand the concept of samadhi (a meditative state of complete awareness). At the time, Swami Vivekananda was a member of Brahmo Samaj, a social and religious group that believed all religions are legitimate pathways to God, and that concepts such as caste and idol worship were outdated. The Brahmo Samaj also advocated the idea that service to humanity is an important form of worship, and thus, worked to end child marriage and illiteracy among women and the poor. Though Swami Vivekananda was impressed with Ramakrishna’s devotion, he disliked his apparent idol worship and lack of emphasis on social concerns. According to some scholars, Ramakrishna developed a liking for the young college student which bordered on infatuation. Ramakrishna was reported to have wept for Swami Vivekananda if he did not visit him regularly. Feeling somewhat uncomfortable with the saint’s infatuation with him, Swami Vivekananda stopped his visits.

Parliament of the World's Religions. Chicago, 1893. Swami Vivekanada was one of the most charismatic speakers at this event who introduced Hinduism to a North American audience.

Changing his name from Narendranath to Swami Vivekananda, he traveled to Chicago in 1893 to speak at the World’s Parliament of Religions to share Hindu spiritual insights. He gave a dynamic speech about the universal truths of Hinduism, and was considered to be one of the most successful speakers at the Parliament. He described Hinduism as a religion which had important teachings to offer a Western audience. Gathering a few Western disciples, Swami Vivekananda worked to spread Hinduism to the West. In 1895, he founded the Vedanta Society in New York City. He eventually recruited swamis to lead centers in Boston and London. 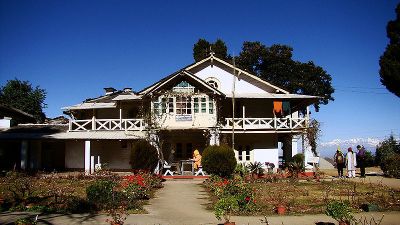 Advaita Ashrama, Mayavati has published many of Vivekananda's works

Swami Vivekananda’s teachings combine devotion, mysticism, and philosophy with his own practical emphasis on service to humankind. He believed that philosophy in the Indian context should not merely focus on personal salvation, but should be applied in everyday actions. He generally ascribed to the Advaita Vedanta school of philosophy. It states that individual selves or souls are not separate or different from one another, but are all part of an unchanging, non-dual reality known as Brahman. Thus, if everything that appears to exist is essentially part of a greater reality, service toward others is essentially service to Brahman. Although Swami Vivekananda cites Advaitic teachings as his philosophical basis for philanthropy, scholars generally agree that his travels to the West and his contact with Christians influenced him considerably. When Vivekananda traveled abroad in the 1890s, Christian organizations in America were working to help the people who were left homeless and unemployed, due to an economic recession. This was likely the first time Swami Vivekananda experienced religious social activism on such a large scale. Some scholars believe that it was these interactions that encouraged him to form the Ramakrishna Mission, rather than the teachings of Advaita Vedanta.

Swami Vivekananda was generally critical of the caste system, and advocated education for women and the poor. He taught his followers that in order for India to move forward as a country, it must not cling to outdated concepts. However, according to some biographers, when traveling abroad, he often defended the caste system as an organized form of the hierarchy that exists in every society. Similarly, Swami Vivekananda also defended the marginalization of women. He described Hindu women as being more spiritual, and therefore superior to Western women. Thus, he attributed their limited participation in society to their virtue and chastity, rather than an unjust social structure. Nevertheless, upon returning to India, he made helping women and the poor a priority of the Ramakrishna Mission. Although Swami Vivekananda convinced others that his ideas about social service had come from Ramakrishna himself, this is highly unlikely, as Ramakrishna’s main focus was worship. Thus, the combination of Hindu philosophy and philanthropy can be considered an important contribution of Swami Vivekananda.

Swami Vivekananda influenced many of his contemporaries as well as future leaders. Rabrindranath Tagore, Sri Aurobindo, and Mahatma Gandhi often spoke of Swami Vivekananda’s influence on them, and on Hinduism in general. His work abroad succeeded in bringing Hinduism to the West with the founding of the Vedanta Society and the Ramakrishna Mission. Most importantly, his emphasis on service as spirituality has led to the adoption of this practice among many Hindus.

Note: Some restrictions may apply to use of individual images which are separately licensed.
Retrieved from https://www.newworldencyclopedia.org/p/index.php?title=Vivekananda&oldid=1070620
Categories:
Hidden category:
This page was last edited on 18 June 2022, at 15:56.
Content is available under Creative Commons Attribution/Share-Alike License; additional terms may apply. See Terms of Use for details.