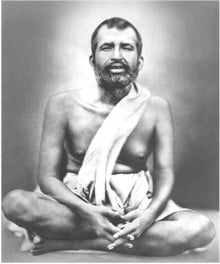 Ramakrishna (1836 – 1886) is one of the most famous Hindu mystics of modern India, who claimed that all religions are legitimate paths to experiencing ultimate truth. Known as an ardent practitioner of bhakti (devotion) toward different forms of the divine (including the Goddess), Ramakrishna became a prominent guru who influenced important Hindu figures such as Vivekananda. He claimed to experience several visions of divinity in the forms of Kali, Krishna, Christ, and Allah, and discovered that all of them lead to enlightenment. However, he was most devoted to the Goddess Kali and his mystical visions affirmed the presence of the Goddess in all things. His teachings inspired the formation of the Ramakrishna Mission, a group which spreads Ramakrishna’s teachings and organizes various philanthropic activities in India and abroad.

Ramakrishna was born into a poor Brahmin family in Karampukur village in Bengal, India. His parents named him Gadadhar Chatterjee. He was well-liked as a boy, and was described as charming and playful. As a child, Ramakrishna demonstrated mystical and religious tendencies. He was a fervent practitioner of bhakti (devotion to god), and is often said to have felt overcome by emotion at the beauty of nature. On one occasion, he was so overcome with religious ecstasy that he lost consciousness completely.

When Ramakrishna was seven years old, his father passed away, and the family experienced severe financial difficulties. Ramkumar, Ramakrishna’s eldest brother, assumed the position of head of the household. Ramkumar was approached by Rani Rashmoni, a widow from Dakshineshwar, who was building a temple dedicated to Kali, the Hindu goddess of destruction. Since Rashmoni belonged to a low caste, she had experienced difficulty in recruiting a priest for her new temple. Ramkumar agreed to assume the position of the temple priest, and Ramakrishna became his assistant. Ramkumar performed the rituals dedicated to goddess Kali, and Ramakrishna performed rituals dedicated to other gods, including Radha and Krishna. When Ramkumar died in 1856, Ramakrishna became the temple priest. Overwhelmed by the loss of his brother, Ramakrishna prayed continuously to Goddess Kali to show herself to him in a vision. He spent many hours weeping, and often spent entire nights in prayer. Later, he reported to his disciples that he was so overcome with anguish that he contemplated suicide. However, before he could act on his suicidal thoughts, it is said that Ramakrishna experienced a vision of blissful light emerging from the Goddess Kali, and overwhelming joy.

After this vision of Goddess Kali, Ramakrishna returned home to Karampukur, and married his wife, Sarada-devi. A year later, he returned to Dakshineshwar and began to study under Bhairavi Brahmani, a practitioner of Tantra. Bhairavi Brahmani was very impressed with the intensity of Ramakrishna’s devotion, and considered him to be a reincarnation of Caitanya, a highly revered Hindu mystic who lived during the fifteenth century. Under Bhairavi Brahmani’s guidance, Ramakrishna managed to overcome his frenzied sense of separation from Kali. Tantric practices helped him to understand that Kali exists in all things, and that the world is like a play (Sanskrit: lila) of Kali.

In 1864, Ramakrishna began to study under Totapuri, a practitioner of Advaita Vedanta. During this period, he attempted to conceptualize the ultimate reality, or Brahman, as being without name and form, thereby neglecting the worship of Kali. He became so focused on realizing Brahman that he also neglected his body, and came close to death. He continued this practice for one year, but discontinued it after almost dying. Thereafter, he returned to the path of bhakti, and is said to have experienced visions of Jesus Christ and Allah in his mystical states. These experiences became the basis for his teaching that all religions are valid paths to the same goal.

Ramakrishna returned to Karampukur, where he taught his wife Sarada-devi how to practice sadhana ("means to realization"). She demonstrated a clear aptitude for spiritual practice, and mastered all that Ramakrishna taught her. She also became a mother figure to Ramakrishna’s disciples, and was later deified by Ramakrishna’s followers. Although poor and illiterate, Ramakrishna began to attract many educated followers. His disciples often reported to have been drawn to him because he taught by example. They believed his life was concrete proof that God-realization and elevated states of consciousness were attainable. In 1886, he died of throat cancer in Kolkata. His chief disciple, Swami Vivekananda, spread Ramakrishna’s teachings throughout India and the world. Vivekananda also founded the Ramakrishna Mission after his guru, an organization that combines spiritual practice with philanthropic activities.

Ramakrishna's teachings were complied by one of his followers, Mahendranath Gupta (known as "M"), who recorded them in the Gospel of Sri Ramakrishna. Like Jesus, Ramakrishna taught by using many everyday metaphors and parables to reach his audience. His teachings of deep mystical insights were presented in simple language so that the average person could understand them.

The central ideas of Ramakrishna's teachings are summarized in the following points:

According to Ramakrishna, the source of all life (called Brahman in Hinduism) is also the common spring from which all religions arose. He saw the various religions as different wells that draw spiritual wisdom and nourishment from the same divine source. Ramakrishna taught that the different religions of the world are various paths to reach God, available for different cultures, tastes, time periods, and personalities. Thus, all religions were, for him, legitimate ways to tap into the infinite, underlying oasis of divine energy and love. He is said to have spent periods of his life experimenting by practicing Islam, Christianity, and various other Yogic and Tantric sects within Hinduism. From these experiments, he concluded:

"One can ascend to the top of a house by means of a ladder or a bamboo or a staircase or a rope; so too, diverse are the ways of approaching God, and each religion in the world shows one of the ways…. A truly religious man should think that other religions are also so many paths leading to the Truth. One should always maintain an attitude of respect towards other religions." [1]

On the same note, he added:

He also believed that all living beings contain the essence of Brahman; therefore, divinity exists in everyone. However, lust and greed cloud the divinity of beings, obscuring their recognition of divinity within and around them. Cultivating positive values such as love and kindness, and spiritual practices such as devotion and meditation, encourage realization of the divinity within. Ramakrishna believed that God-realization should be the ultimate goal of all beings, for divinity is the essence of life. He said, "As a lamp does not burn without oil, so [too] a [hu]man cannot live without God" [3]

Ramakrishna had a significant impact on modern Hinduism. During the eighteenth and nineteenth centuries, many living in India had turned to Christianity because of the influence of British colonialism at that time. Ramakrishna, however, showed that indigenous religious traditions were equally valid paths to attain spiritual substance and enlightenment. He revitalized Hinduism in Bengal and helped it deflect criticisms and challenges originating from Islam and Christianity. Ramakrishna encouraged Indians to experience the fruits of both wisdom and joy to be found within their own religious traditions. His simple teaching style, using wit and everyday stories, combined with his own personal example of mystical devotion, caused him to gain many devotees and admirers. He helped the average person to understand the deeper aspects of Hinduism that were sometimes obscured in abstract philosophical language. His most famous disciple, Swami Vivekananda, subsequently founded the Ramakrishna Mission, named after his guru, which practiced philanthropy on Ramakrishna's principle that everyone is a part of the Divine so they should serve one another as they would serve God. Finally, Ramakrishna’s teaching that all religions are legitimate paths to ultimate truth has led the way to a more inclusive attitude toward religions around the world.

Note: Some restrictions may apply to use of individual images which are separately licensed.
Retrieved from https://www.newworldencyclopedia.org/p/index.php?title=Ramakrishna&oldid=1070618
Categories:
Hidden category:
Content is available under Creative Commons Attribution/Share-Alike License; additional terms may apply. See Terms of Use for details.