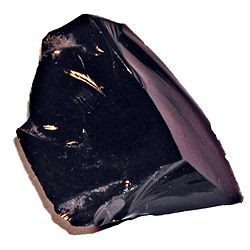 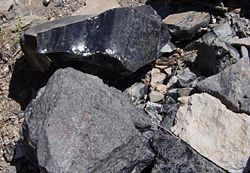 Obsidian is an igneous rock with a glassy form that is produced during the rapid cooling of volcanic lava. It is sometimes classified as a mineraloid, implying that it is mineral-like but not a true mineral because it is not crystalline. It is generally dark green, brown, or black, but some stones are nearly colorless and others have interesting patterns and shades of color.

People of early cultures used obsidian to produce weapons, tools, mirrors, and decorative objects. It is currently used for manufacturing surgical scalpel blades, as the blade edges can be made to approach molecular thinness. In addition, the rock continues to be used for ornamental purposes and as a gemstone.

Obsidian is produced from volcanoes when felsic[1] lava cools and freezes without sufficient time for crystal growth. It is commonly found in areas where the cooling of lava was rapid—such as at the margins of the lava flows and in places where the lava entered a lake or sea. This rock can be classified as an "extrusive" igneous rock—that is, igneous rock formed by the cooling of lava on the Earth's surface.

This glassy rock is metastable—over time, it becomes fine-grained, mineral crystals. The breakdown of obsidian is accelerated by the presence of water. Consequently, no obsidian has been found that is older than the Cretaceous age. Tektites were once thought by many to be obsidian produced by lunar volcanic eruptions, but few scientists currently endorse this hypothesis.

Among other places, Yellowstone National Park has a mountainside containing large quantities of obsidian, located between Mammoth Hot Springs and the Norris Geyser Basin. It can also be found in Scotland.

Obsidian consists mainly of silicon dioxide (SiO2), usually 70 percent or more. Its composition is very similar to that of granite and rhyolite. It is relatively soft, with a typical hardness of 5 to 5.5 on the Mohs scale. Its relative density is approximately 2.6. Like any other type of glass and some other types of naturally occurring rocks, it breaks with a characteristic conchoidal fracture.

In some ways, obsidian resembles quartz because of their similar chemical makeup. Quartz, however, is crystalline, and several of its properties therefore differ from those of obsidian.

Pure obsidian is usually dark in appearance, but the color varies depending on the presence of impurities. The presence of iron and magnesium typically gives the material a dark green or brown or black color. Some rare samples are nearly clear. In some stones, the inclusion of small, white, radially clustered crystals of cristobalite in the black glass produces a blotchy or snowflake pattern, and the rock is called "snowflake obsidian." Alternatively, the rock may contain patterns of gas bubbles, aligned along layers created as the molten rock flowed before solidifying. As a result, the rock may acquire an interesting appearance, such as a golden sheen or rainbow sheen. It is then called "sheen obsidian" or "rainbow obsidian," respectively.

Obsidian was highly valued in certain Stone Age cultures because, like flint, it could be fractured to produce sharp blades or arrowheads. It was also polished to create early mirrors.

Pre-Columbian Mesoamericans used obsidian extensively. For instance, they carved and worked obsidian for tools and decorative objects. The ancient Mesoamericans also made a type of sword with obsidian blades mounted in a wooden body. Called a macuahuitl, the weapon was capable of inflicting terrible injuries, combining the sharp cutting edge of an obsidian blade with the ragged cut of a serrated weapon that brought fear.

Native Americans traded obsidian throughout North America. This rock was also used in construction of the Moai—the large stone statues on Easter Island.

Each volcano, and in some cases each volcanic eruption, produces a distinguishable type of obsidian, making it possible for archeologists to trace the origins of a particular artifact.

Obsidian is used in cardiac surgery, as well-crafted obsidian blades have a cutting edge up to five times sharper than high-quality steel surgical scalpels, with the edge of the blade reaching veritable molecular thinness. It produces a cleaner cut and less tissue trauma, which translates to faster healing and less scar tissue.[2]

This rock is also used for ornamental purposes and as a gemstone, for it possesses the peculiar property of presenting a different appearance according to the manner in which it is cut. When cut in one direction it is a beautiful jet black; when cut across another direction it is glistening gray. "Apache tears" are small rounded obsidian nuggets embedded within a grayish-white perlite matrix.

Retrieved from https://www.newworldencyclopedia.org/p/index.php?title=Obsidian&oldid=1087838
Categories:
Hidden category:
This page was last edited on 17 November 2022, at 23:45.
Content is available under Creative Commons Attribution/Share-Alike License; additional terms may apply. See Terms of Use for details.