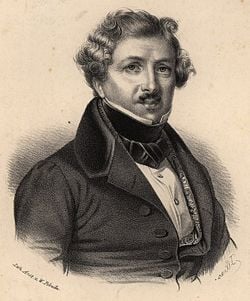 Louis-Jacques-Mandé Daguerre (November 18, 1787 – July 10, 1851) was the French artist and chemist who is often credited with being the inventor of photography, and is recognized for his invention of the Daguerreotype process of photography. He succeeded in producing an image in less than thirty minutes that did not fade. Listed as one of the 100 most influential people in history[1] there is little doubt that the impetus he gave to the development of photography helped to bring about changes in modern life. Not only do the non-elite possess the technology to record visual images of their lives and families, but the reporting of news and thus the discipline of history has also changed. Visual images now accompany verbal reporting and written accounts and often tell a story of their own.

Although the Daguerreotype could not capture moving images, once the potential following the invention was realized, others soon built on this pioneer technology.

Daguerre was born in Cormeilles-en-Parisis, France. At the age of 16, he was an assistant stage designer in a Paris theater, gaining a reputation for his use of light. Before long, he was lighting director for several theaters. He also painted scenes for Opera productions. From 1824, he experimented with making pictures, showing dioramas around France, England and Scotland. 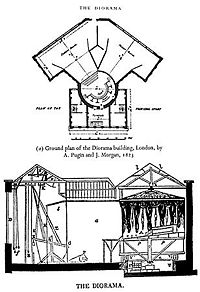 Plan and Cross-section of Daguerre's Diorama in London.

An alternative to the also popular "Panorama" (panoramic painting), the Diorama was a theatrical experience viewed by an audience in a highly specialized theater. As many as 350 patrons would file in to view a landscape painting that would change its appearance both subtly and dramatically. Most would stand, though limited seating was provided. The show lasted ten to 15 minutes, after which time the entire audience (on a massive turntable) would rotate to view a second painting. Later models of the Diorama theater even held a third painting.

The size of the proscenium was 24 feet wide by 21 feet high (7.3 meters x 6.4 meters). Each scene was hand-painted on linen, which was made transparent in selected areas. A series of these multi-layered, linen panels were arranged in a deep, truncated tunnel, then illuminated by re-directed sunlight. Depending on the direction and intensity of the skillfully manipulated light, the scene would appear to change. The effect was so subtle and finely rendered that both critics and the public were astounded, believing they were looking at a natural scene.

A few years after Nicéphore Niépce produced the world's first photograph, the two men started a four-year cooperation in 1829 until Niépce's sudden death in 1833. Together Daguerre and Niépce developed a process called Physautotype that involved lavender oil. Daguerre often made use of a Camera Obscura in his theater lighting and wanted to "fix" the image. 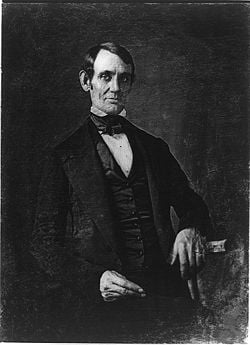 The first photograph ever taken of Abraham Lincoln was a daguerreotype made in 1846 or 1847.

After years of experiments, he developed a technique to develop images. In 1835 he put a plate exposed in the Camera Obscura into a chemical cupboard. Some time later, when he took the plate out of the cupboard, he found that an image had developed. Looking into the cupboard, he reached the conclusion that this had been caused mercury vapour from a broken thermometer. He now knew that an image could be developed, but he did not know how to fix this image, that is, to stop it from fading. Experimentation succeeded in reducing the time it took for the image to develop, which he reduced from eight hours to thirty minutes. Finally, in 1837 he perfected the fixing process, which he called the Daguerreotype.

In 1839, he announced the latest perfection of the Daguerreotype, with the French Academy of Sciences announcing the process on January 9 of that year. Daguerre's patent was acquired by the French Government, and, on August 19, 1839, the French Government announced the invention was a gift "Free to the World." However, Daguerre himself registered the patent for England on August 12, which greatly slowed the development of photography in Great Britain. Antoine Claudet was one of the few people legally able to take daguerreotypes there.

For his invention, Daguerre was awarded an annual pension of 10,000 francs by the French government.[2]

The Daguerreotype in The USA

The Daguerreotype was widely used in the United States, where the first photographic image of Abraham Lincoln was a Daguerreotype. One of the first major application of the invention was during the American Civil War, although because moving images could not be captured, scenes were actually re-constructed after the event. Nonetheless, members of the public had more immediate access to the images of war than had earlier generations, who had to rely of artistic representations.

Daguerre was awarded the French Legion of Honor in 1839. He was a member of the French Academy of Fine Arts and of the Academy of St. Luke. A fire, also in 1839, destroyed Daguerre equipment and most of his prints. Enthusiasm for the process was not immediate. It was regarded as lacking skill and art, compared with portraiture or painting. Initially, it was regarded as a novelty, a type of entertainment. Daguerre himself was always interested in the scientific application of his process, how images before, during and after dissection, for example, could assist biological and botanical knowledge. The Daguerreotype process could only be used for portraits. A disadvantage, too, was inability to duplicate an image. Moving images could not be photographed, because due to the length of the process, anything in motion was simply not captured. Nonetheless, as photography developed, so did the media’s ability to illustrate events with images, which soon emerged as important components of news reporting, of journalism and of communication generally. The invention of photography has enabled events and history to be recorded visually as well as in print. Many important events have been recorded. Portraiture had limited preservation of family and of self-images to those who could afford to employ an artist. Now, the non-elite as well as the elite possess “images,” and can preserve a visual record of their lives and achievements. Once the potential of photography was realized, others built on Daguerre's legacy. By 1851, with Frederick Scott Archer's "Collodion process—images required only two or three seconds of light exposure" and motion photography became a reality. By 1871, with 1871 Richard Leach Maddox "gelatin dry plate silver bromide process" negatives no longer had to be developed immediately, and could also be used again.[3] The ease with which images could subsequently be reproduced, and transmitted, has done much to speak information about the world in which we live. It has encouraged responses to crises, to natural disaster and to humanitarian need. It has helped to break down barriers between people caused by ignorance. Like art, as pornography, photography can also be abused.

Retrieved from https://www.newworldencyclopedia.org/p/index.php?title=Louis_Daguerre&oldid=1085454
Categories:
Hidden category:
This page was last edited on 4 November 2022, at 02:53.
Content is available under Creative Commons Attribution/Share-Alike License; additional terms may apply. See Terms of Use for details.