Butane, also called n-butane (normal butane), is an unbranched alkane with four carbon atoms in each molecule. Its molecular formula may be written as CH3CH2CH2CH3. Butane is also used as a collective term for both n-butane and its only other isomer, isobutane (also called i-butane or methylpropane), CH(CH3)3. Both isomers of butane are highly flammable, colorless gases at ordinary temperatures and atmospheric pressure. They can be extracted from natural gas or obtained by refining petroleum.

Butane is useful for many applications. Bottled butane gas is a fuel for cooking and camping. It is also used as a component of gasoline (petrol), as a feedstock component for the production of base petrochemicals in steam cracking, and as a fuel for cigarette lighters. When butane is blended with propane and other hydrocarbons, the mixture is referred to commercially as liquefied petroleum gas (LPG), which is a fuel for heating appliances and vehicles.

Recent concerns regarding depletion of the ozone layer by freon gases (chlorofluorocarbons or halomethanes) have led to increased use of isobutane and LPG as refrigerants, especially in domestic refrigerators and freezers, and as propellants in aerosol sprays.

The name butane was derived by back-formation from the name butyric acid. The latter is a carboxylic acid with four carbon atoms, including the carbon atom in the carboxyl group. The molecular formula of butyric acid may be written as CH3CH2CH2COOH.

When oxygen is plentiful, butane burns to form carbon dioxide and water vapor; when oxygen is limited, carbon (soot) or carbon monoxide may also be formed. The reaction may be written as follows:

n-Butane is the feedstock for DuPont's catalytic process for the preparation of maleic anhydride (C2H2(CO)2O), as shown by the following reaction:

n-Butane, like all hydrocarbons, undergoes free radical chlorination producing both 1-chlorobutane and 2-chlorobutane, as well as more highly chlorinated derivatives. 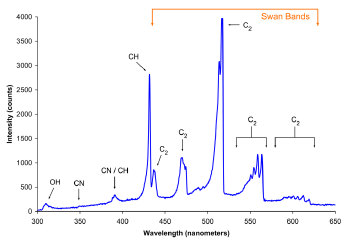 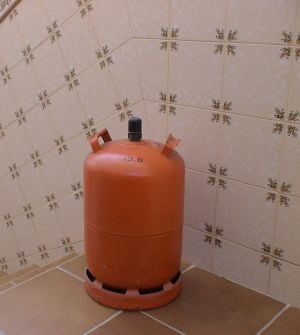 A butane gas cylinder that may be used for cooking.

Butane gas is sold bottled as a fuel for cooking and camping. When blended with propane and other hydrocarbons, it is referred to commercially as Liquified Petroleum Gas (LPG). It is also used as a component of gasoline (petrol), as a feedstock for the production of base petrochemicals in steam cracking, and as a fuel for cigarette lighters.

The highly purified form of isobutane is useful as a refrigerant and as a propellant in aerosol sprays. It is used, for instance, in household refrigerators and freezers, largely replacing the halomethanes that are believed to deplete the ozone layer. When used as a refrigerant or propellant, isobutane may be referred to as R-600a. It is also used as a feedstock in the petrochemical industry, such as for the synthesis of isooctane.[1]

When used as a refrigerant, the flammability of isobutane is not a major issue because the amount of this substance in an appliance is not enough to cause a combustible mix, given the amount of air in a room. The system operating pressure for butane is lower than that for the halomethanes, such as Dichlorodifluoromethane (R-12). Thus, the direct conversion of R-12 systems to butane, such as in automotive air conditioning systems, will not function optimally.

Inhaling butane can cause drowsiness, narcosis, asphyxia, cardiac arrhythmia, and frostbite. Inhalation can lead to instant death from asphyxiation. Butane is the most commonly misused volatile solvent in the UK, and was the cause of 52 percent of solvent-related deaths in 2000.[2] If butane is sprayed directly into the throat, the jet of fluid may cool rapidly to –20 °C by expansion, causing prolonged laryngospasm.[3] "Sudden Sniffer's Death syndrome," first described by Bass in 1970,[4] is the most common single cause of solvent-related death, resulting in 55 percent of known fatal cases.