Buttercup is the common name for any of the members in the large plant genus Ranunculus in the flowering plant family Ranunculaceae, typically characterized by glossy yellow or white flowers with a yellow center. The bright yellow flowers gave rise to the name buttercup, while the deeply toothed or lobed leaves have led to the generally interchangeable common name crowfoot also being applied to plants of this genus. A few species have orange or red flowers and occasionally, as in R. auricomus, petals may be absent.

There are more than 400 species in the Ranunculus genus, mainly native to temperate and cold regions. They are mostly herbaceous perennials but some are annuals or biennials.

As with other members of the family Ranunculaceae, Ranunculus species have an acrid taste and they can pose poisoning risks for livestock when consumed fresh, due to formation of protoanemonin and other toxic compounds. Even excessive handling can cause contact dermatitis in humans. Nonetheless, like other flora and fauna, buttercups provide a purpose for the ecosystem, various animals, and humans. The buttercup plant, such as the leaves, are consumed as food, while pollinating insects secure nutrition while pollinating the flowers. For humans, some species of buttercup, with their large and brightly colored flowers, are popular ornamental plants, with various cultivars developed for this purpose. 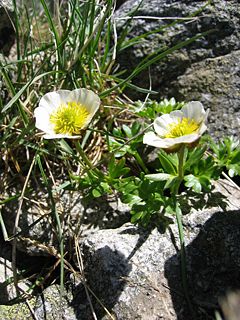 Ranunculus glacialis, one of the white-flowering species.

The Ranunculus genus is part of the Ranunculaceae, a family of flowering plants also known as the "buttercup family" or "crowfoot family." The family name is derived from the genus Ranunculus. Members include Anemone (anemones), Ranunculus (buttercups), Aconitum (aconite), and Clematis.

Ranunculaceae are mostly herbaceous plants, with leaves that are often more or less palmately compound. The flowers of the Ranunculaceae are generally showy and medium to large in size in order to attract pollinators.

Ranunculus is the largest genus in Ranunculaceae. In Latin the name means "little frog," reflecting the fact that many of the plants in Ranunculus are aquatic plants.

The water crowfoots (Ranunculus subgenus Batrachium), which grow in still or running water, are sometimes treated in a separate genus Batrachium. They have two different leaf types, thread-like leaves underwater and broader floating leaves, although for some species, such as R. aquatilis, a third, intermediate leaf form occurs.

Buttercups are common in wooded areas and fields in temperate zones, but also are found in the arctic and alpine regions, as well as in the Andes and sub-Antarctic regions. They usually flower in April or May, but flowers may be found throughout the summer, especially where the plants are growing as opportunistic colonizers, as in the case of garden weeds. 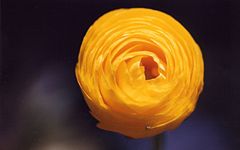 Blooming outside Conservatory of Flowers

Some species are popular ornamental flowers in horticulture, with many cultivars selected for large and brightly colored flowers.

When consumed fresh, Ranunculus species pose poisoning problems for cattle, horses, and other livestock. Members of the family Ranunculaceae contain protoanemonin glycosides, which are toxic to men and animals. Other poisonous or toxic compounds, alkaloids and glycosides, are also very common. Normally, the acrid taste of these plants and the blistering of the mouth caused by their poison means they are usually left uneaten. However, poisoning can occur where buttercups are abundant in overgrazed fields where little other edible plant growth is left, and the animals eat them despite the acrid taste.

Symptoms of poisoning include bloody diarrhea, excessive salivation, colic, and severe blistering of the mucous membranes and gastrointestinal tract. When Ranunculus plants are handled, naturally occurring ranunculin is broken down to form protoanemonin, which is known to cause contact dermatitis in humans and care should therefore be exercised in excessive handling of the plants (Schmidt 2007; Hill and van Heyingen 1951). The toxins are degraded by drying, so hay containing dried buttercups is safe.

Ranunculus species are used as food plants by the larvae of some Lepidoptera species including Hebrew Character and Small Angle Shades.

An old superstition says that if you hold a buttercup under your face, and yellow light is reflected on your face, it means that you like butter.

In the interior of the Pacific Northwest of the United States, the buttercup is called "Coyote’s eyes"—iceyéeyenm sílu in Nez Perce and spilyaynmí áčaš in Sahaptin. In the legend, Coyote was tossing his eyes up in the air and catching them again when Eagle snatched them. Unable to see, Coyote made eyes from the buttercup. 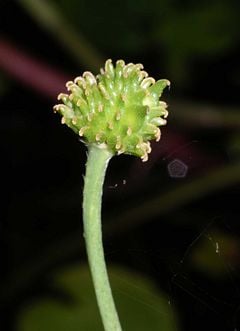 Retrieved from https://www.newworldencyclopedia.org/p/index.php?title=Buttercup&oldid=678521
Categories:
This page was last edited on 2 April 2008, at 03:57.
Content is available under Creative Commons Attribution/Share-Alike License; additional terms may apply. See Terms of Use for details.