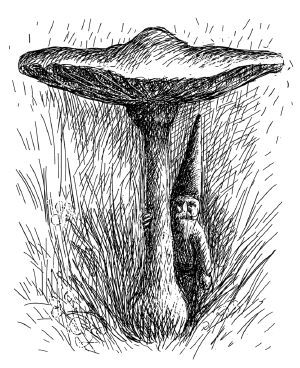 A Nisse (gnome) hiding behind a toadstool.

The gnome is a class of legendary creatures throughout Europe and, by cultural transfer, in the United States that has taken on many different meanings, but most generally refers to very small people, often men, that live in dark places, especially underground, in the depths of forests, or more recently in gardens. Most European ethnic groups have had some kind of gnome legends with local variations. Modern traditions portray gnomes as small, old men wearing pointed hats and living in forests and gardens.

Despite varying forms, gnomes have the common attribute of being able to move through the earth as easily as humans move atop it. Paracelsus, a sixteenth century Swiss alchemist identified gnomes as a class of nature spirits comprising earth elementals (in contrast to the air, water, and fire elementals). The class of gnomes has been considered to include satyrs, pans, dryads, elves, brownies, and goblins, some helping plants and animals, some helping humans, some reclusive ones staying underground or in dark forests, perhaps hoarding treasure, and others interacting mischievously or even harmfully with humans.

The garden gnome, first appearing in Germany, has appeared in gardens in many parts of the world and achieved an iconic status in popular culture.

The word gnome is derived from the New Latin, gnomus. It is often claimed to descend from the Greek gnosis ("knowledge,") but more likely comes from genomos "earth-dweller."[1]

The depiction of gnomes has changed quite often over the years and remained different in different cultures. Originally many of them were conceived of as ugly, ground dwelling creatures that were less humanoid than the gnomes of today. In fact, they were more akin to small goblins and disfigured faeries, and acted more like animals than human beings. In contrast, modern sources often depict gnomes as diminutive, stout humanoids who wear tall, pointed conical caps and dress in solid colors such as blue, red, or green; in this depiction, the male gnome always has a long white beard.[2] They have the intelligence of a human (are sometimes thought to be wiser), and have human-like personalities.

While their appearances may differ, the older and newer traditions do share a similar belief in gnomes' capabilities: They are said to move as easily through the earth as humans walk upon it, and the sun's rays turn them into stone. They are incredibly strong and fast, and said to possess almost supernatural abilities in the manipulation of natural material (although they also are said to fiercely guard against any unnecessary damage to the earth and wildlife).

Gnomes first appeared in the oral tradition of Northern European folklore, and so it is difficult to pinpoint their exact origins. Gnomes share many characteristics with the Norse dwarves, so much so that it is suggested that at a time in Scandinavian tradition, the two were actually interchangeable. At some point, however, a split between gnomes and dwarves occurred. It is not clear if this happened before or after dwarves were assimilated into Dutch and German tradition. What is known is that the modern day depiction of gnomes is more Dutch than Scandinavian. Thus, it is speculated that Dutch tradition created gnomes as they are known today out of Norse dwarves, and from there gnome belief spread to Germany and back into Scandinavia.

In the sixteenth century, the Swiss alchemist Paracelsus popularized the gnome when he declared them to be the most important of the elemental spirits. In his view, gnomes represented the earth, specifically stone and minerals, and possessed the supernatural energies associated within these materials.

Like many creatures based in oral tradition, every culture that incorporates gnomes views the creatures somewhat differently. Below are descriptions of the most common gnome traditions found in Europe. 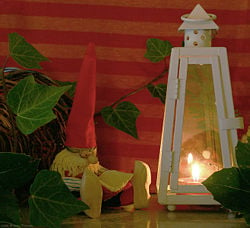 A tomtenisse made of wood. A common Scandinavian Christmas decoration.

The traditional word for gnomes in the Scandinavian culture is Tomte which was originally coined by Saint Birgitta of Sweden in the 1300s.[3] They are also known as Nisse in Norway and Denmark. Gnomes are believed to live for 400 years, are industrious, kind, and wise. Family is important to them, and they almost always merry. Female gnomes give birth only once, usually to twins. They always live in rural areas, sometimes even on (or below) farms, and will give advice to farmers. They are seen as guardians of nature and animals. Although they are kind to humans, gnomes are still very secretive; they never allow humans to know the location of their burrows, never teach non-gnomes their language, and appear only when they want to.

In more recent times, gnomes have been said to be the helpers of Santa Claus, and in Scandinavia, Christmas images usually depict gnomes in the role that elves play in other parts of the Western world.[3] 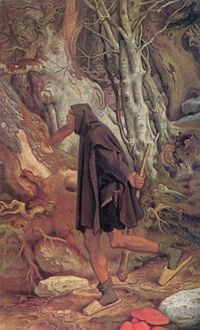 Often featured in Germanic fairy tales, including those by the Brothers Grimm, the German gnome often resembles a gnarled old man, living deep underground, who guards buried treasure. Because of this, Swiss bankers are sometimes disparagingly referred to as the "Gnomes of Zürich." Individual gnomes are not very often detailed or featured as characters in stories, but in Germanic folklore, Rübezahl, the lord over the underworld, was sometimes referred to as a mountain gnome.

Germany made gnomes famous in the mid-1800s with the first production of the garden gnome in the town of Gräfenroda in Thuringia, by Phillip Griebel. Griebel made terracotta animals as decorations and created the gnome based on local myths as a way for people to enjoy the stories of the gnomes' willingness to help in the garden at night. Gnome manufacture spread across Germany, with numerous large and small manufacturers appearing, each one having its own particular design. 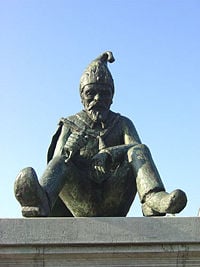 Kabouter is the Dutch word for gnome. In Dutch mythology and Dutch folklore, kabouters are tiny men who live underground or else are household spirits helping in the home. They are generally shy of humans. The males have long, full beards (unlike dwarves, who do not always have full beards) and wear tall, pointed red hats. In the Legend of the Wooden Shoes, an old Dutch folktale, the kabouter teaches the Dutch man how to make wooden shoes.[4]

The Dutch illustrator Rien Poortvliet played an important part in Kabouter lore with the publication of Leven en werken van de Kabouter ("Lives and Works of the Gnome") written by Wil Huygen, later translated into English and published as Gnomes.[5] 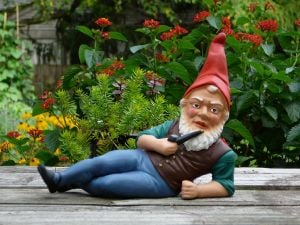 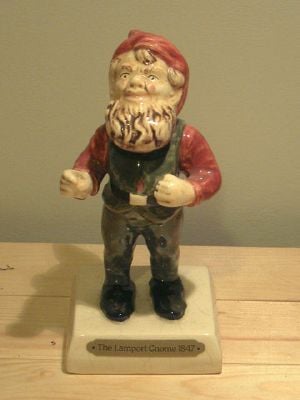 A replica of Lampy the Lamport gnome.

After the first garden gnome was produced in Germany by Phillip Griebel, the practice quickly spread across all of Germany and into France and England, wherever gardening was a serious hobby. Griebel's descendants still make them and are the last of the German producers, all others having moved production to Poland or China.

Traditional garden gnomes are made from a terracotta clay slurry poured into molds. The gnome is removed from the mold, allowed to dry, and then fired in a kiln until it is hard. Once cooled the gnome is painted to the level of detail desired and sent off to do his work in someone's garden. More modern gnomes are made from resins and similar materials.

A sub-culture exists among those who collect garden gnomes, which is frequently lampooned in popular culture.

Gnomes have become controversial in serious gardening circles in the United Kingdom, and are banned from the prestigious Chelsea Flower Show as the organizers claim that they detract from the garden designs. Gnome enthusiasts accuse the organizers of snobbery because gnome figures are popular in working class and suburban gardens.

Gnomes show up in many books and tales in popular culture. L. Frank Baum's The Wonderful Wizard of Oz and The Life and Adventures of Santa Claus, Ozma of Oz, all featured gnomes (called "nomes"). Legendary author J. R. R. Tolkien used the word "gnome" in his early work, The Book of Lost Tales, for the people later called the Noldor (part of his High Elves). However, he dropped the term in his published works, since he found the gnomes of folklore to be so unlike his High Elves as to confuse his readers.

Some of the most famous works regarding gnomes are Gnomes and Secrets of the Gnomes by Wil Huygen and Rien Poortvliet. They are illustrated fictional guidebooks to the mythical creatures, and resulted in the animated series, The World of David the Gnome. Originally written in Dutch, these books depict the Kabouters (Dutch gnomes) as a wise, noble, and civilized race whose natural enemies are the trolls, due to their contrasting natures.

In some role-playing games, including RuneScape, Dungeons & Dragons, EverQuest, Horizons: Empire of Istaria, and World of Warcraft, gnomes are featured as a short race of humanoids, closely related to dwarves, exceptionally adept at tinkering and mechanics. They and their allies often have technologies not normally found in fantasy settings, such as firearms or robot-like automata.

Retrieved from https://www.newworldencyclopedia.org/p/index.php?title=Gnome&oldid=1097364
Categories:
Hidden category:
This page was last edited on 24 January 2023, at 08:03.
Content is available under Creative Commons Attribution/Share-Alike License; additional terms may apply. See Terms of Use for details.