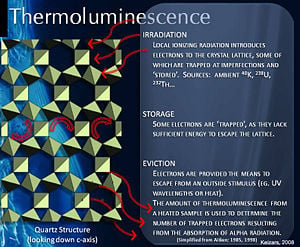 Geochronology is the science of determining the absolute ages of rocks, fossils, and sediments found on Earth. This field of science relies on a variety of dating methods, including those that are classified under the larger groupings of radiometric dating, luminescence dating, and incremental dating. There is a certain degree of uncertainty inherent within each method used, but the interdisciplinary approach of using several methods helps produce the best results.

Geochronology differs in application from biostratigraphy, which is the science of assigning relative ages of sedimentary rocks by describing, cataloging, and comparing fossil assemblages within them. Biostratigraphy does not directly provide an absolute age determination of a rock, but it merely places the rock within an interval of time at which that fossil assemblage is known to have coexisted. However, both disciplines work together hand in hand, to the point that they share the same system of naming rock layers and the time spans utilized to classify layers within a strata. (The terminology is given in the table on the right.)

For instance, with reference to the geologic time scale, the Upper Permian (Lopingian) lasted from 270.6 +/- 0.7 Ma (Ma = millions of years ago) until somewhere between 250.1 +/- 0.4 Ma (oldest known Triassic) and 260.4 +/- 0.7 Ma (youngest known Lopingian)—a gap in known, dated fossil assemblages of nearly 10 Ma. While the biostratigraphic age of an Upper Permian bed may be shown to be Lopingian, the true date of the bed could be anywhere from 270 to 251 Ma.

On the other hand, a granite which is dated at 259.5 +/- 0.5 Ma can reasonably be called "Permian," or most properly, to have intruded in the Permian.

The science of geochronology is the prime tool used in the discipline of chronostratigraphy, which attempts to arrange the sequence and time of deposition of all rocks in a geological region, and eventually, the entire geologic record of the Earth. The aim of chronostratigraphy is to give a meaningful age date to fossil assemblage intervals and interfaces, as well as to determine the geologic history of the Earth and extraterrestrial bodies.

It is, however, important not to confuse geochronologic and chronostratigraphic units.[1] Geochronological units are periods of time, thus it is correct to say that Tyrannosaurus rex lived during the Late Cretaceous Epoch.[2] Chronostratigraphic units are geological material, so it is also correct to say that fossils of the genus Tyrannosaurus have been found in the Upper Cretaceous Series.[3] In the same way, it is entirely possible to visit an Upper Cretaceous Series deposit—such as the Egyptian mangrove deposit where the Tyrannosaurus fossils were found—but it is naturally impossible to visit the Late Cretaceous Epoch, as that is a period of time.

As noted above, various dating methods are used in geochronology. Each method has a certain degree of uncertainty, but the reliability of the results can be enhanced by using several techniques.[4]

By measuring the amount of Radioactive decay of a radioactive isotope with a known half-life, geologists can establish the absolute age of the parent material. A number of radioactive isotopes are used for this purpose, and depending on the rate of decay, are used for dating different geological periods. With the exception of the radiocarbon method, most of these techniques are actually based on measuring an increase in the abundance of a radiogenic isotope, which is the decay-product of the radioactive parent isotope.[5][6][7] Two or more radiometric methods can be used in concert to achieve more robust results.[8] Most radiometric methods are suitable for geological time only, but some such as the radiocarbon method and the 40Ar/39Ar dating method can be extended into the time of early human life[9] and into recorded history.[10]

Some commonly used radiometric dating techniques are given below.

Incremental dating techniques allow the construction of year-by-year annual chronologies, which can be fixed (that is, linked to the present day and thus calendar or sidereal time) or floating.

Marker horizons are geological units in different geographic locations but of the same age. They allow age-equivalence to be established between different sites.[11] For example, tephra is often used in archaeology.