Parsley is the common name for a bright green, biennial herb of European origin, Petroselinum crispum, which is extensively cultivated for its leaves, which are used as a garnish or for flavoring food. One variety, the Hamburg parsley (P. crispum var. tuberosum) is cultivated for its edible root. Parsley belongs to the flowering plant family Apiaceae, which also is known as the parsley family.

In addition to the unique flavor and aroma of parsley adding to the delight of nature for humans, the plant also is nutritious, providing high amounts of vitamin C. In addition, the taproot, leaves, and seeds of parsley are used medicinally (Hanrahan and Frey 2005).

The Apiaceae family, to which parsley belongs, is also known as the Umbelliferae family, with both names allowed by the International Code of Botanical Nomenclature. This family comprises unusually aromatic plants with hollow stems, including the carrot, parsnip, dill, cumin, caraway, fennel, and other relatives. The family also includes some highly toxic plants, such as hemlock. 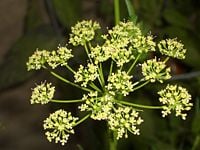 Apiaceae is a large family with about 300 genera and more than 3,000 species. The earlier name, Umbelliferae, derives from the inflorescence being in the form of a compound "umbel." The small flowers are radially symmetrical with five small sepals, five petals, and five stamens.

Petroselinum crispum, or parsley, is a self-seeding biennial plant with a single, spindle-shaped taproot, from which grow smooth and many-branched, juicy stems. A biennial plant, it can grow as much as one meter (three feet) in its second year. The alternate compound leaves are bright green and feather-like in appearance, finely divided and tri-pinnate. Some varieties are flat-leafed and others more curly. The small, five-petaled flowers, which bloom in the second year, are yellow-green and appear in clusters. The seeds are tiny, gray-brown, ribbed, and egg-shaped (ovate) (Hanrahan and Frey 2005).

Though parsley looks similar to parsnip, and parsnips are among the closest relatives of parsley in the umbellifer family of herbs, these two plants taste quite different. The similarity of the names is a coincidence. 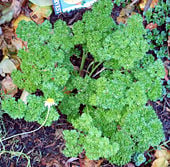 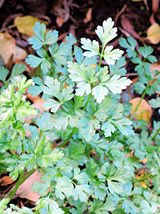 Although there are more than 30 varieties of parsley, two forms are particularly popular: Curly-leaf parsley and Italian or flat-leaf parsely (Herbst 2001). The flat-leaf variety is known as Petroselinum crispum var. neapolitanum (Grin 2008a). A variety known as P. crispum var. crispum is commonly known as double curled parsley (Grin 2008b). Curly-leaf parsley is often used as a garnish. Italian or flat-leaf parsley generally is considered to have a stronger flavor (Herbst 2001). This view is backed by chemical analysis that finds much higher levels of essential oil in the flat-leaved cultivars. One of the compounds of the essential oil is apiol. The use of curly-leaf parsley may be favored by some because it cannot be confused with the similar poison hemlock of the same family, such as may happen with flat-leaf parsley.

Another type of parsley, P. crispum var. tuberosum, or P. crispum Tuberosum Group, is grown as a root vegetable (Grin 2008c). It is commonly known as Hamburg parsley or turnip-root parsley. This type of parsley produces much thicker roots than types cultivated for their leaves, with a root as much as six times the size as that of garden parsley (Hanrahan and Frey 2005). Although little known in Britain and the United States, root parsley is very common in Central and Eastern European cuisine, where it is used in most soups or stews. 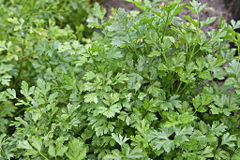 Parsley's germination is notoriously slow and inconsistent and may require three to six weeks (Jett). Tales have been told concerning its lengthy germination, with some suggesting that "germination was slow because the seeds had to travel to hell and back two, three, seven, or nine times (depending on sources) before they could grow" (Jett). Hanrahan and Frey (2005) report that in ancient times, parsley was dedicated to Persephone, the wife of Hades and goddess of the underworld.

Parsley is used as a garnish and to flavor foods. It is very common in Middle Eastern, European, and American cooking. Parsley is used for its leaf in much the same way as coriander (which is also known as Chinese parsley or cilantro), although it has a milder flavor.

In parts of Europe, and particularly in West Asia, many foods are served with chopped parsley sprinkled on top. The fresh flavor of parsley goes extremely well with fish. Parsley is a key ingredient in several West Asian salads, such as tabbouleh, which is the national dish of Lebanon. In Southern and Central Europe, parsley is part of bouquet garni, a bundle of fresh herbs used to flavor stocks, soups, and sauces. Parsley is often used as a garnish. Persillade is mixture of chopped garlic and chopped parsley. Gremolata is a mixture of parsley, garlic, and lemon zest.

The taproot, leaves, and seeds of parsley are used medicinally. Its essential oil, particularly that from the seed, contains the chemicals apiole and myristicin and these constituents are diuretic and act as uterine stimulates. The saponin content may help relieve coughs. An advisory panel on herbal medicines, German Commission E, has approved parsley for use in the prevention and treatment of kidney stones (Hanrahan and Frey 2005).

Other medicinal uses include:

Parsley should not be consumed as a drug or supplement by pregnant women. Parsley as an oil, root, leaf, or seed could lead to uterine stimulation and preterm labor (WKH 2006). There is a chemical found in the seeds that has abortifacient properties (Hanrahan and Frey 2005). It also irritates the epithelial tissues of the kidney and should not be used by those with kidney disease without consultation with a physician (Hanrahan and Frey 2005). Parsley is high in oxalic acid, a compound involved in the formation of kidney stones and nutrient deficiencies. Parsley oil contains furanocoumarins and psoralens, which leads to extreme photosensitivity if used orally.

Parsley is widely used as a companion plant in gardens. Like many other umbellifers, it attracts predatory insects, including wasps and predatory flies to gardens, which then tend to protect plants nearby. They are especially useful for protecting tomato plants, for example, the wasps that kill tomato hornworms also eat nectar from parsley. While parsley is biennial, not blooming until its second year, even in its first year it is reputed to help cover up the strong scent of the tomato plant, reducing pest attraction.