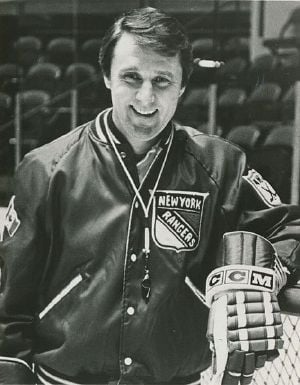 Herbert Paul Brooks (August 5, 1937 – August 11, 2003) was an American ice hockey coach, best known for coaching the United States hockey team to a gold medal at the 1980 Winter Olympic Games in a spectacular event known ever since as the Miracle on Ice. The Miracle on Ice was Brooks' crowning achievement and legacy. In an effort to make the U.S. hockey team more competitive he drilled them through grueling conditioning, and thus forged a team spirit and commitment to winning, even against the Soviet hockey team that was widely recognized as the greatest in the world. The stakes for the game were elevated by the Soviet Union's invasion of Afghanistan in 1979 and the threat by President Jimmy Carter, later carried out, to withdraw from the 1980 Summer Olympic Games, scheduled for Moscow, Russia. The American victory against the Soviets, and then against the Finnish team in the gold medal game, is widely considered the greatest upset in a sporting event in the twentieth century, and perhaps ever. 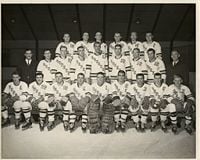 Born in St. Paul, Minnesota, Brooks played on the Johnson High School hockey team that won the 1955 state hockey championship. Brooks later played hockey at the University of Minnesota and was a member of the 1964 and 1968 United States Olympic teams. He almost made the 1960 Olympic team, the last American team to win the Olympic gold medal in ice hockey, only to be cut the week before the Olympic Games started. Later, he coached the University of Minnesota Golden Gophers hockey team to three National Collegiate Athletic Association (NCAA) championships (1974, 1976, and 1979). He coached St. Cloud State University in the mid-1980s.

Brooks was chosen to coach the 1980 United States Men’s Olympic Hockey team. The United States team entered the competition having been seeded seventh in the final round of twelve teams that qualified for the Lake Placid Olympics. The team was composed of collegiate players and amateurs, some of whom had already signed contracts, but not yet played in the National Hockey League (NHL), the world's premier professional league. Going into the tournament, the Soviet team, was heavily favored not only to beat the Americans, but to sweep their way to the gold medal. Though officially amateur, the Soviet team was composed of Red Army members who essentially played professionally in a well-developed league with excellent training facilities. They were led by legendary players in world ice hockey, such as Boris Mikhailov, a right-winger who served as the team captain, and Vladislav Tretiak, considered by many to be the best ice hockey goaltender in the world at the time, as well as talented, young, and dynamic players such as defenseman Viacheslav Fetisov. In exhibitions, the Soviet team had gone 3-4-1 against an National Hockey League all-star squad, and won games against the NHL's New York Rangers, New York Islanders, and Quebec Nordiques.

The Soviet and American teams were natural rivals due to decades-old Cold War disputes. In addition, President Jimmy Carter was at the time considering a U.S. boycott of the 1980 Summer Olympics, to be held in Moscow, in protest of the Soviet invasion of Afghanistan, which began the year before. Carter eventually decided in favor of the boycott.

On February 9, a week before the Olympic hockey tournament was to begin, the two teams met for an exhibition match. The Soviet Union defeated the United States team handily, 10-3.

In group play, the United States surprised many observers with their physical, cohesive play, starting with a 2-2 tie against Sweden and followed by a 7-3 victory against a very strong team from Czechoslovakia. The U.S. team finished with 4 wins and 1 draw to advance to the medal round. In the other group, the Soviets stormed through their opposition undefeated, often by grossly lopsided scores—knocking off Japan 16-0, the Netherlands 17-4, and Poland 8-1—and easily qualified for the medal round. Sweden and Finland also qualified for the medal round.

The U.S. team and the Soviet team prepared for the medal round in different ways. Coach Viktor Tikhonov of the Soviets rested most of his best players, preferring to let them study plays rather than actually skate. Brooks, however, continued with his tough, confrontational style, skating "hard" practices, and berating his players for any perceived weaknesses.

The day before the match, columnist Dave Anderson wrote in the New York Times, "Unless the ice melts, or unless the United States team or another team performs a miracle, as did the American squad in 1960, the Russians are expected to win the Olympic gold medal for the sixth time in the last seven tournaments."

The home crowd, reinforced by the U.S. team's improbable run during group play and the Cold War "showdown" mentality, were in a patriotic fervor throughout the match, waving U.S. flags and singing patriotic songs such as "God Bless America." The rest of the United States (except those who watched the game live on Canadian television) would have to wait to see the game, as ABC decided not to cover the games live, but rather on tape delay so the late afternoon game could be seen in prime time.

The U.S. team fell behind early, as they had in many of their preliminary games. Vladimir Krutov deflected a slap shot by Aleksei Kasatonov past U.S. goaltender Jim Craig to give the Soviets a 1-0 lead, and, after Buzz Schneider scored for the United States to tie the game, the Soviets rallied again with a Sergei Makarov goal.

Down 2-1, Craig improved his play, turning away many Soviet shots before the U.S. team had another shot on goal. (The Soviet team had 39 shots on goal in the game, while the Americans had only 16.) In the waning seconds of the first period, the Soviets made a mistake that would give the U.S. team an opening. Dave Christian fired a desperate slap shot on Tretiak. The Soviet goalie saved the shot but misplayed the rebound. The Soviets started to move toward the bench as if the period was over, but Mark Johnson scooped it past Tretiak to tie the score as the clock ticked down to one second left in the period. The frustrated Soviet team played the final second of the period with just three players on the ice, as the rest of the team had retired to their dressing room for the first intermission. 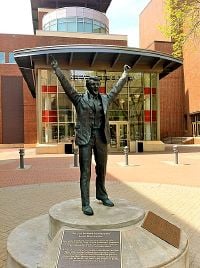 At this point, Tikhonov made a decision that would be second-guessed many times over. He replaced Tretiak with backup goaltender Vladimir Myshkin to start the second period, a move which surprised many players on both teams, including Fetisov, who would later identify it as the "turning point of the game." The switch seemed to work at first, however, as Myshkin allowed no goals in the second. Aleksandr Maltsev scored on the power play for the Soviets to make the score 3-2.

At 8:39 into the final period, Johnson scored again for the U.S., firing a loose puck past Myshkin to tie the score just as a power play was ending. Only a couple shifts later, Mark Pavelich passed to U.S. captain Mike Eruzione, who was left undefended in the high slot. Eruzione fired a slap shot past Myshkin, who was screened by one of his own defense man. This goal gave the U.S. a 4-3 lead with exactly 10 minutes to play in the contest.

Craig withstood another series of Soviet shots to finish the match, though the Soviets did not remove their goalkeeper for an extra attacker. As the U.S. team tried desperately to clear the zone (move the puck over the blue line, which they did with seven seconds remaining), the crowd began to count down the seconds left. Sportscaster Al Michaels, who was calling the game on ABC along with former Montreal Canadiens goalie Ken Dryden, picked up on the countdown in his broadcast, and delivered his famous call: “Do you believe in miracles? YES!”

Twenty-five years later, this victory was voted the greatest moment of the twentieth century by Sports Illustrated.

The match versus the Soviets popularized the "U-S-A! U-S-A!" chant, which has been used by U.S. supporters at many international sports competitions since 1980.

After the completion of the national anthem during the medal ceremony, United States team captain Mike Eruzione accepted the gold medal for the United States, inviting all of his teammates onto the podium with him.

In 2002, the members of the 1980 team jointly lit the Olympic Flame at the climax of the opening ceremonies of the 2002 Winter Olympics in Salt Lake City, Utah.

Brooks later coached in the National Hockey League for the New York Rangers, where he became the fastest coach in Rangers' team history to win 100 games. He also coached the Minnesota North Stars, New Jersey Devils, and Pittsburgh Penguins. He was a long-time head scout for the Pittsburgh Penguins from the mid-1990's until the day of his death.

Brooks died in a one-car accident on the afternoon of August 11, 2003, near Forest Lake, Minnesota on Interstate 35, six days after he turned 66. It is believed that Brooks fell asleep behind the wheel before the accident after driving all night, and neither drugs nor alcohol were responsible.

Disney released a film about the 1980 Olympic team in 2004 called Miracle featuring American actor, Kurt Russell, playing the part of Brooks. Brooks served as a consultant during principal photography, which was completed shortly before his death. The film was dedicated to Brooks with the line, "He never saw it. He lived it."

Upon the 25th anniversary of the Miracle on Ice, the Olympic ice arena in Lake Placid, New York, where the United States won their gold medal, was renamed Herb Brooks Arena. A statue of Brooks depicting his reaction to the victory in the "Miracle" game was erected in Saint Paul, Minnesota in 2003.