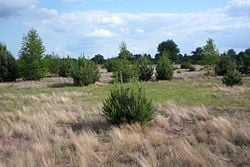 Ecological succession, a fundamental concept in ecology, refers to more-or-less predictable and orderly changes in the composition or structure of an ecological community, resulting from biotic changes in resource supply. This process is governed by competition for resources. Succession may be initiated either by formation of new, unoccupied habitat (e.g., a lava flow or a severe landslide) or by some form of disturbance (e.g. fire, severe windthrow, logging) of an existing community. The former case is often referred to as primary succession, the latter as secondary succession.

Eugene Odum compared succession to the development or maturation of an organism, and regarded the view that "ecological succession is a developmental process and not just a succession of species each acting alone" as "one of the most important unifying theories in ecology" (Odum 1983; Goldsmith 1985). Such a concept highlights the fact that ecosystems, just like individual organisms, develop through an orderly procession of stages, with subsequent stages dependent on those preceding.

The trajectory of ecological change can be influenced by site conditions, by the interactions of the species present, and by more stochastic factors such as availability of colonists, or seeds, or weather conditions at the time of disturbance. Some of these factors contribute to predictability of successional dynamics; others add more probabilistic elements. In general, communities in early succession will be dominated by fast-growing, well-dispersed species (opportunist, fugitive, or r-selected life-histories). As succession proceeds, these species will tend to be replaced by more competitive (k-selected) species. Typically, r-selected species produce many offspring, each of which is unlikely to survive to adulthood, while K-selected species invest more heavily in fewer offspring, each of which has a better chance of surviving to adulthood.

Trends in ecosystem and community properties in succession have been suggested, but few appear to be general. For example, species diversity almost necessarily increases during early succession as new species arrive, but may decline in later succession as competition eliminates opportunistic species and leads to dominance by locally superior competitors. Net primary production, biomass, and trophic properties all show variable patterns over succession, depending on the particular system and site.

History of the idea

The idea of ecological succession goes back to at least the nineteenth Century. One of the earliest to express the idea was Henry David Thoreau, who used a very similar terminology.

Henry Chandler Cowles, at the University of Chicago, developed a more formal concept of succession, following his studies of sand dunes on the shores of Lake Michigan (the Indiana Dunes). He recognized that vegetation on sand-dunes of different ages might be interpreted as different stages of a general trend of vegetation development on dunes, and used his observations to propose a particular sequence (sere) and process of primary succession. His 1899 paper, "The ecological relations of the vegetation of the sand dunes of Lake Michigan," published in the Botanical Gazette is one of the classic publications in the history of the field of ecology. 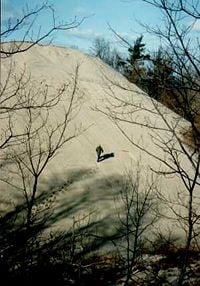 The Indiana Dunes on Lake Michigan, which stimulated Cowles' development of his theories of ecological succession.

Understanding of succession was long dominated by the theories of Frederic Clements, a contemporary of Cowles, who held that successional sequences of communities (seres), were highly predictable and culminated in a climatically determined stable climax (a biological community of plants and animals that has reached an equilibrium or steady state). Clements and his followers developed a complex taxonomy of communities and successional pathways,

A contrasting view, the Gleasonian framework, is more complex, with three items used in determining the composition and spatial distribution of species: interactions with the physical environment, population-level interactions between species, and disturbance regimes. It differs most fundamentally from the Clementsian view in suggesting a much greater role of chance factors and in denying the existence of coherent, sharply bounded community types. Gleason's ideas, first published in the early twentieth century, were more consistent with Cowles' thinking, and were ultimately largely vindicated. However, they were largely ignored from their publication until the 1960s.

Beginning with the work of Robert Whittaker and John Curtis in the 1950s and 1960s, models of succession have gradually changed and become more complex. In modern times, among North American ecologists, less stress has been placed on the idea of a single climax vegetation, and more study has gone into the role of contingency in the actual development of communities.

Early colonizers on denuded landscapes are often nitrogen-fixers, either free living or symbiotic. These plants are most common on glacial moraines and mudflows; to a lesser degree on mine talkings landslides, floodplains, and dunes; and least commonly found on volcanoes and rock outcrops (Walker 1993). These nitrogen fixers make the landscape more hospitable for later successional species to colonize.

Primary succession can take multiple trajectories, depending on the composition of the original colonizers, nutrient availability, and the presence of new species in an area, either through migration or human introduction. In Alaska, newly deglaciated terrain may have poplar (Populus) and spruce (Picea) trees early on, but depending on nutrient availability and growth rate, the forest may develop differently. Thousands of years ago, before Picea had migrated to the area, succession proceeded differently. Poplar (Populus), willow (Salix), and dwarf birch (Betula nana) dominated instead. Another example of this is from Glacier Bay, Alaska, where alders were absent in the 1800s, and poplar and spruce were early successional species. However, the later migration of alder into the area caused it to become a dominant early successional species because of its ability to [[nitrogen fixation|fix nitrogen (Fastie 1995). Alaska has relatively low species richness and thus only a handful of options for ecological succession following deglaciation. A more species diverse location, such as Hawaii, may have many more options for the trajectory of ecological succession following a volcanic eruption. This has become especially true with introduction of an exotic nitrogen-fixing plant, Myrica faya, which increases the nitrogen supply in the soil and can change the path of succession (Vitousek et al. 1987) by making it easier for more species of plants to colonize and increasing the growth rate.

Secondary succession takes place on landscapes that have previously been vegetated, but that have been disturbed, such as by fire or logging. Plants may resprout from roots, and seeds that survived the disturbance may germinate. The controlling factors that alter the ecosystem following initial colonization include inherent life traits of the colonizers (seed size and number, growth rate, maximum size, longevity), facilitation (making the landscape more favorable for later successional species, such as nitrogen fixation), competitive interactions, herbivory, and stochastic variation in the environment (Chapin et al. 2002). Chapin et al. (1994) found that life history traits are the most important factor in determining the pattern of species change on a landscape, but facilitation, competition, and herbivory determined the rate of change. Nutrient levels in the soil can be either high or low at the beginning of secondary succession, and higher nutrient availability leads to higher growth rate. These early colonizers allocate much of their energy to reproduction early on in order to disperse as much as possible on the resource-rich, newly denuded landscape. These are often herbaceous or shrubby plants that are often considered weeds by humans. As succession proceeds, slower growing plants with lower nutrient requirements colonize, and the early successional species disappear.

An example of secondary succession might have resulted in a forest fire, leaving previously forested land nude. Small, herbaceous and shrubby plants may follow, and eventually the trees of the forest will regrow. As they grow tall and form a canopy, species must compete for light. Shade-intolerant species will soon disappear from the landscape. Forest succession can have several stages. If a sun-loving red pine forest becomes colonized by hardwood species, eventually the hardwoods will increase forest shading and decrease the chances of survival of the red pine seedlings. This will lead to a shift in forest community.

Ecological succession was formerly seen as having a stable end-stage called the climax or climax community, sometimes referred to as the 'potential vegetation' of a site, shaped primarily by the local climate. This idea has been largely abandoned by modern ecologists in favor of nonequilibrium ideas of how ecosystems function. Most natural ecosystems experience disturbance at a rate that makes a "climax" community unattainable. Climate change often occurs at a rate and frequency sufficient to prevent arrival at a climax state. Additions to available species pools through range expansions and introductions can also continually reshape communities.

Goldsmith (1985), however, claims that largely ideological and political factors, rather than scientific facts, underly the trend toward discrediting both the idea of a climax state and the comparison of ecosystems developing in stages with the growth of organisms, culminating in a mature individual. He claims that the original view of a climax state and orderly progression is teleological and holistic, and implies a goal of achievement of stability, and this is a "nightmarish thought" for scientists ideologically committed to a "random and atomized world." Of course, in the broadest sense, just as some ecosystems are stable, the earth itself is remarkably stable, as show by Gaia theory. If the oxygen, carbon dioxide, and nutrient levels fluctuated randomly and significantly, then life as we know it could not exist. Whether Goldsmith or modern ecological scientists are proven correct, the divergence of views does show how facts learned in one era can change. During the mid-twentieth century, the view of a climax community was textbook orthodoxy.

Many species are specialized to exploit disturbances. In forests of northeastern North America, trees such as Betula alleghaniensis (Yellow birch) and Prunus serotina (Black cherry) are particularly well-adapted to exploit large gaps in forest canopies, but are intolerant of shade and are eventually replaced by other (shade-tolerant) species in the absence of disturbances that create such gaps.

The development of some ecosystem attributes, such as pedogenesis (the process by which soil is created) and nutrient cycles, are both influenced by community properties, and, in turn, influence further community development. This process may occur only over centuries or millennia. Coupled with the stochastic nature of disturbance events and other long-term (e.g., climatic) changes, such dynamics make it doubtful whether the 'climax' concept ever applies or is particularly useful in considering actual vegetation.

Retrieved from https://www.newworldencyclopedia.org/p/index.php?title=Succession_(ecological)&oldid=687853
Categories:
This page was last edited on 4 April 2008, at 01:29.
Content is available under Creative Commons Attribution/Share-Alike License; additional terms may apply. See Terms of Use for details.