Black widow spider is the common name for members of several species of dark-colored spiders in the genus Latrodectus (widow spiders) of the Theridiiae family, and in particular the New World spiders L. mactans, L. varioulus, and L. hesperus. Black widow spiders are notorious for their powerful, neurotoxic venom.

The three North American black widow spiders also are known more specifically as "southern black widow" (Latrodectus mactans), "northern black widow" (L. varioulus), and "western black widow" (L. hesperus). These are characterized by dark coloration and black hair, and the females commonly have a red hourglass-shaped design on the underside of their abdomen. The term black widow occasionally is applied to several other members of the Latrodectus genus, including the Australian red-back (L. hasselti) and the brown widow spider (L. geometricus, sometimes called the gray widow), both of which also have the red, orange, or yellow hourglass design on the underside of the female's abdomen.

An enduring myth, even believed by scientists and found in ecology textbooks, is that a behavioral trait of black widow spiders is for the female to consume the male during or after mating (Crawford 2003). Indeed, such behavior is the source of the common name of these spiders. While such behavior is observed under captive conditions, it is considered to be uncommon among black widow spiders in nature (Crawford 2003).

Except where otherwise indicated, the remainder of the article applies to all three of the above-mentioned North American species.

As spiders (order Araneae), the black widows are predatory animals with two body segments, eight legs, no chewing mouth parts, and no wings. As is characteristic of all arthropods, black widow spiders have a hard exoskeleton composed of chitin and protein.

As members of the family Theridiidae, the tangle-web spiders or cobweb spiders, black widows are part of a family of three-dimensional space-web builders, characterized by being entelegyne (have a genital plate in the female), araneomorph ecribellate (use sticky capture silk instead of woolly silk), tangle space web builders, and having a comb of serrated bristles (setae) on the tarsus of the fourth leg.

The widow spiders comprise the genus Latrodectus in the family Theridiidae, and include approximately 31 recognized species. There are widow spiders on every continent of the world except for Antarctica. In some areas in Africa, this genus receives the generic name "button spiders." The silk of the Latrodectus genus is larger in diameter than the silk of other spiders.

Currently, there are three recognized species of black widow found in North America: The southern black widow (L. mactans), the northern black widow (L. variolus), and the western black widow (L. hesperus). As the name indicates, the southern widow is primarily found (and is indigenous to) the southeastern United States, ranging from Florida to New York, and west to Texas, Oklahoma, and they run particularly rampant in parts of Arizona. The northern widow is found primarily in the northeastern U.S. and southeastern Canada (only on the Bruce Peninsula), though its ranges overlap that of L. mactans quite a bit. The western widow is found in the western half of the United States, as well as in southwestern Canada and much of Mexico.

Prior to 1970, when the current taxonomic divisions for North American black widows were set forth by Kaston, all three varieties were classified as a single species, L. mactans. As a result, there exist numerous references that claim that "black widow" (without any geographic modifier) applies to L. mactans alone. As common usage of the term "black widow" makes no distinction between the three species (and many laypersons are unaware of the differences between them), and as the three species have much in common, this article treats all three species of black widow equally. 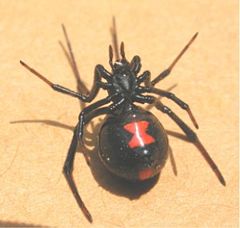 Only young female black widow spiders are gloss black with an hourglass shaped marking on the underside of its abdomen which, although most commonly red, may range in color from white to yellow to various shades of orange and red. They also bear a small, usually red (colors vary) dot near the spinnerets, which is separate from the hourglass. In L. variolus, the two halves of the hourglass shape may be separated into two separate patches.

A large female black widow spider can grow to about 1.5 inches (3.8 centimeters), counting legspan. The body is about 0.5-0.6 inches (1.2-1.6 centimeters). Male black widow spiders are half the size of the female or smaller. They have longer legs and a smaller abdomen in relation to their body size. They are also usually dark brown with varying colors of stripes/dots and without the hourglass mark. Adult males can be distinguished from juvenile females by their more-slender body, longer legs, and large pedipalps typical of most other male spiders. (Unlike the North American black widow spiders, L. geometricus, the brown widow spider, has a black-and-white "geometric" pattern on the dorsal side of its abdomen, and L. hasselti, the red-back spider, has an obvious orange to red longitudinal stripe on the upper abdomen. These two species also have the characteristic hourglass marking on the underside of the abdomen.)

As with many venomous creatures, the brightly colored markings serve as a warning to predators. Eating a black widow will normally not kill a small predator (birds, and so forth), but the sickness that follows digestion is enough for the creature to remember that the bright red marking means "do not eat." Because the adult female black widow typically hangs and moves about its web upside down, its hourglass is on its front.

Juvenile female widows juvenile females also bear brightly colored marks upon their backs. They spend a large quantity of time in search of an optimal environment, and the marks on their backs is convenient for warming predators when they are walking around. Once an optimal location is found, adult female widows often spend their entire lives in one place. Female juveniles develop an hourglass before the dorsal markings are shed.

Males bear similar marks to the juvenile females to serve as warning while they are searching for mates; however, the marks are not as prominent (not as brightly colored, or as large). Males, being less venomous, are less of a threat to predators, so having less prominent but similar marks helps predators to better judge their prey. (Some large birds can eat male widows without adverse effect, and so only avoid female spiders; those who cannot eat any widow without adverse effect eat nothing with the marks).

When a male is mature, he spins a sperm web, deposits semen on it, and charges his palpi with the sperm. Black widow spiders reproduce sexually when the male inserts his palpus into the female's spermathecal openings. Contrary to popular belief, the female only rarely eats the male after mating, and L. mactans is the only black widow species of the three North American species for which this form of mate cannibalism has been observed in the wild (Crawford 2003).

The female deposits her eggs in a globular silken container in which they remain camouflaged and guarded. A female black widow spider can produce four to nine egg sacs in one summer, each containing about 100-400 eggs. Usually, eggs incubate for twenty to thirty days. Rarely do more than one hundred survive through this process. On average, thirty will survive through the first molting, due to cannibalism, lack of food, or lack of proper shelter.

It takes two to four months for black widow spiders to mature enough to breed; however, full maturation typically takes six to nine months. The females can live for up to five years, while a male's lifespan is much shorter. Lifespans depend upon environment, with shelter being the greatest determining factor and food the second greatest (Jones). 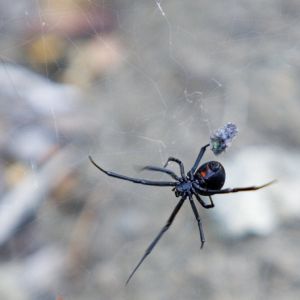 Black widow with a fly

Black widow spiders typically prey on a variety of insects, but occasionally they do feed upon woodlice, diplopods, chilopods, and other arachnids (McCorkle 2002). When the prey is entangled by the web, the black widow spider quickly comes out of its retreat, wraps the prey securely in its strong web, then punctures and envenomates its prey. The venom takes about ten minutes to take effect; in the mean time, the prey is held tightly by the spider. When movements of the prey cease, digestive enzymes are released into the wound. The black widow spider then carries its prey back to its retreat before feeding (Foelix 1982).

There are various parasites and predators of widow spiders in North America, though apparently none of these have ever been evaluated in terms of augmentation programs for improved biocontrol. Parasites of the egg sacs include the flightless scelionid wasp Baeus latrodecti, and members of the chloropid fly, genus Pseudogaurax. Predators of the adult spiders include a few wasps, most notably the blue mud dauber, Chalybion californicum, and the spider wasp Tastiotenia festiva. Other species will occasionally and opportunistically take widows as prey, but the preceding all exhibit some significant specific preference for Latrodectus.

Spiders bite but do not sting, though it can sometimes feel like being stung. Compared to many other species of spiders, their chelicerae (mouthparts) are not very large or powerful. In the case of a mature female, the hollow, needle shaped part of each chelicera, the part that penetrates the skin, is approximately 1.0 millimeters (around .04 inches) long, sufficiently long to inject the venom to a dangerous depth. The males, being much smaller, can inject far less venom and inject it far less deeply.

The actual amount of venom injected, even by a mature female, is very small in physical volume. When this small amount of venom is diffused throughout the body of a healthy, mature human, it usually does not amount to a fatal dose (although it can produce the very unpleasant symptoms of latrodectism). Deaths in healthy adults from Latrodectus bites are relatively rare in terms of the number of bites per thousand people. Only 63 deaths were reported in the United States between 1950 and 1989. On the other hand, the geographical range of the widow spiders is very great. As a result, far more people are exposed, world-wide, to widow bites than are exposed to bites of more dangerous spiders, so the highest number of deaths worldwide are caused by members of their genus. Widow spiders have more potent venom than most spiders, and prior to the development of antivenom, 5 percent of reported bites resulted in fatalities. The venom can cause a swelling up to 15 centimeters. Improvements in plumbing have greatly reduced the incidence of bites and fatalities in areas where outdoor privies have been replaced by flush toilets.

There are a number of active components in the venom:

The venom is neurotoxic.

Retrieved from https://www.newworldencyclopedia.org/p/index.php?title=Black_widow_spider&oldid=1064475
Categories:
Hidden category:
This page was last edited on 8 February 2022, at 14:28.
Content is available under Creative Commons Attribution/Share-Alike License; additional terms may apply. See Terms of Use for details.