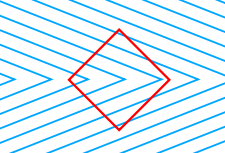 An Orbison illusion is an optical illusion where straight lines appear distorted. There are several variants of the Orbison illusion. The illusion is similar to both the Hering and Wundt illusions. Although the Orbison illusion and other similar illusions have not been completely explained, they has stimulated much valuable research into human perceptual processes. They have also been utilized by artists to bring about entertaining and impressive effects in their works.

The Orbison illusion is named for psychologist William Orbison, who first published his findings in a 1939 issue of the American Journal of Psychology. In addition to the figures that have taken his name, Orbison also included figures such as the Hering and Wundt illusions in his article, which discussed the potential cause of these sorts of illusions.

The Orbison figures most often involve a figure placed over a background of concentric circles or radial lines. The figure appears distorted because of the background image; squares appear to bulge and circles often appear elliptical.

Orbison explained these illusions with the theory that fields of force were created in the perception of the background patterns. Any line that intersected these fields would be subsequently distorted in a predictable way. This theory, in the eyes of modern science, does not have much validity.[1]

It is still unclear exactly what causes the figures to appear distorted. Theories involving the processing of angles by the brain have been suggested. Interactions between the neurons in the visual system may cause the perception of a distorted figure.[2] Other theories suggest that the background gives an impression of perspective. As a result, the brain sees the shape of the figure as distorted.

Like similar perceptual illusions, the Orbison illusions help researchers better understand how the brain and visual systems process information. It also provides an intriguing experience for viewers, and as such has been utilized by artists in their works.

Retrieved from https://www.newworldencyclopedia.org/p/index.php?title=Orbison_illusion&oldid=1087968
Categories:
Hidden category:
This page was last edited on 18 November 2022, at 01:04.
Content is available under Creative Commons Attribution/Share-Alike License; additional terms may apply. See Terms of Use for details.