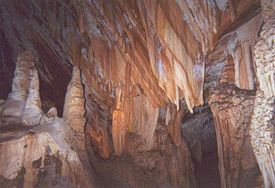 The Lucas Cave at Jenolan Caves

The Jenolan Caves are a leading example of impressive caverns in the Blue Mountains of Australia and are included in the Greater Blue Mountains World Heritage Area. They are regarded as Australia’s premier cave system and contain more than a dozen spectacular show caves, underground rivers and remarkable formations. It is considered one of the finest and oldest cave systems in the world.

The caves are the most celebrated of several similar groups in the limestone of the country. They include numerous Silurian marine fossils of great interest, and the calcite formations, both richly colored and pure white, are of extraordinary beauty. Major portions of the caves have been rendered easily accessible and are well-lit.

The Jenolan Caves are tucked into the lush vegetation of the Blue Mountains, a central part of Australia's Great Dividing Range, and are surrounded by rivers and lakes teeming with life, as well as by unique eucalypt vegetation and its associated communities. 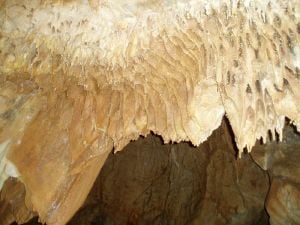 Small shawls and straws in the Jenolan Caves.

The Jenolan Caves in New South Wales, Australia are a series of caves, tunnels, and caverns formed by two converging streams. Produced by crystallization of calcite and aragonite from solutions which dissolved calcium carbonate while seeping through the limestone, the cave system includes speleothems (stalactites and stalagmites), straws, shawls, columns, helictites, calcite pool crystals, canopies, cave pearls and rim pool dams. Underground rivers have also played a part in enlarging and sculpting the caves. Some of the formations are pure white, while others display a rich red, brown or yellow color due to iron oxides and hydroxides. The caves are located on the western margin of the Blue Mountains, at an elevation of 2,600 feet (800 m), though on varying levels.

By measuring the ratio of radioactive potassium and trapped argon gas, which was produced when the potassium decayed, scientists determined the age of the clay in the cave to be approximately 340 million years old, thereby making this cave complex the world's oldest known and dated open cave system. In 1999 geologists had estimated the age of the caves to be between 90 and 100 million years old. [1]. Further scientific research is being carried out by the Commonwealth Scientific and Industrial Research Organisation(CSIRO) in association the University of Sydney and the Australian Museum. 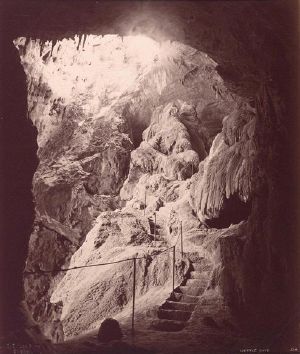 The entrance to Nettle Cave, circa 1888.

Local Gundungarra Aboriginal tribes knew Jenolan Caves area as 'Binoomea' (Dark Places) and possibly shunned them; circa 1835-1840 the area was recorded for the first time by either James, Charles or Alf Whalan, three brothers who each claimed to have discovered the caves while searching for a bushranger, James McKeown, whom they claimed used the caves as a hide-out. One of the less-visited caverns in the area is called McKeown's Hole, however there is no actual evidence of his existence, and some believe that it is more likely the brothers were searching for cattle that had strayed from their nearby farm.

The caves, then known as the Fish River Caves, came under New South Wales Government control in 1866, becoming only the second area in the world reserved for the purpose of conservation. The following year Jeremiah Wilson was appointed as the first "Keeper of the Caves." Wilson not only explored the already known Elder and Lucas Caves but later discovered the Imperial, Left Imperial (now known as Chifley), Jersey and Jubilee Caves. The caves were open to tourism early, but there was little protection from visitors damaging formations until souveniring was banned in 1872.

In April, 1884, William Marshall Cooper, Surveyor of Public Parks for the State Government, was assigned the task of mapping out a new road plan in order to make the caves more accessible to the public. On a 10-day trek from Katoomba to the Caves he worked out a route covering 26.5 miles from the Western Hotel in Katoomba. He reported: "Anyone accustomed to walking can do it comfortably in 12 hours… when the proposed horse track is completed, it will be a very enjoyable ride of five hours." It became known as the Six Foot Track.

Cooper also pointed out that "Fish River Caves" was a misnomer, the Fish River being on the western side of the Great Dividing Range and the caves on the eastern side. At his suggestion, the caves were officially named "Jenolan Caves" in 1884 after the parish in which they are situated.[2] 'Jenolan' is an Aboriginal name meaning 'high place'.

By 1885, Parliament had approved ₤2,500 for the construction of Cooper's bridle track, with the work starting at the most difficult area, the Megalong Cleft, where a zig-zag had to be cut, partly in solid rock, to reduce the grade to 1:5.5.[3]

The first recorded passage of the completed bridle track from Katoomba to Jenolan was by the governor, Lord Carrington, in September 1887. Lord Carrington also made the first official visit to the caves at the completion of his journey, accompanied by Wilson. In 1898 the current Caves House guesthouse was built, replacing the earlier wooden accommodation house built by Jeremiah Wilson, which had been destroyed in a fire.

James Wiburd become "Keeper of the Caves" in 1903 and quickly discovered five more caves within eighteen months: the River, Pool of Cerberus, Temple of Baal, Orient and Ribbon Caves. He remained Keeper until 1932, when he left following a bitter dispute over the development of the Ribbon Cave for tourism.

The Chifley Cave, originally known as the Left Imperial Cave but named for Prime Minister Ben Chifley in 1952, was the first of the caves to be lit with electric light, as early as 1880. In 1968, the Orient Cave became the first in the world to be cleaned, due to contamination from a nearby coal boiler. Steam cleaning was found to be damaging to the crystal formations, due to the rapid expansion and contraction caused by the heat from the steam. Following this, it was determined that when cleaning becomes necessary, water from the caves' own underground rivers is used. 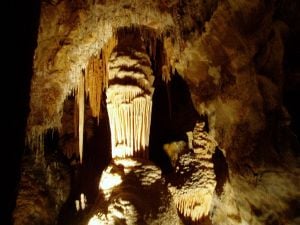 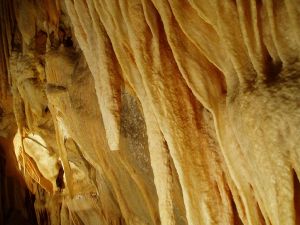 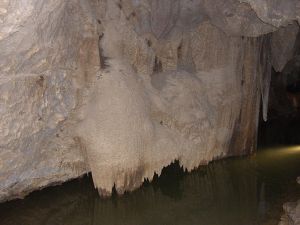 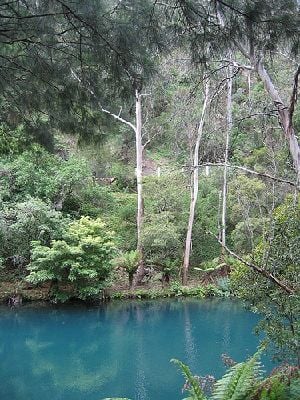 Large portions of this extensive cave system are accessible only to cavers, especially those areas along the underground river system; but, there are ten caves at Jenolan that have been developed for regular tourism.

The road from Sydney passes through the Arch, and six of the cave tours leave from assembly points within it. Adjacent to the Grand Arch is the Devil's Coach House, a vast open-ended chamber that forms part of the many nature walks in the area. High above both of these is Carlotta Arch, a free-standing arch that is all that remains of a higher cavern system long since eroded and collapsed. Along with these areas, there are several other caves in the area, some of which are available for special tours.