The Greater Blue Mountains Area is a UNESCO World Heritage Site in the Blue Mountains of New South Wales, Australia. Forming a central part of the Great Dividing Range, it consists of eight individual protected areas covering more than one million hectares of rainforest, canyons, eucalypt forest and heath lands.

The Area is comprised of seven contiguous national parks and one protected reserve which run parallel to the country's east coast behind Sydney. It runs from 160 kilometers (100 ml) north to 65 km (40 ml) south of Sydney and from 55 to 120 kilometers (34 - 75 ml) inland.

It is an area of rugged tablelands, sheer cliffs, deep, inaccessible valleys and rivers and lakes teeming with life. The unique plants and animals that live in this pristine highland relate an extraordinary story of Australia's antiquity and its diversity of life. Contained here is the story of the evolution of Australia's unique eucalypt vegetation and its associated communities.

Initially the mountains were seen by the early European settlers as an impediment to expansion. Eventually they came to be valued for recreation and wilderness appreciation, prompting conservation measures. Though there are environmental concerns, this area of dramatic and sweeping scenery remains relatively pristine.

The Greater Blue Mountains Area consists of 10,326 square kilometers (3987 sq mi) of mostly forested landscape on a sandstone plateau 60 to 180 kilometers (35 to 50 mi) inland from central Sydney. The area includes vast expanses of wilderness and is equivalent in area to almost one third of Belgium, or twice the size of Brunei.

The traditional owners of the Area—the Aboriginal peoples residing in the area before European influx—are the Darug, Gundungurra, Wanaruah, Wiradjuri, Darkinjung and Tharawal Nations.

The area takes its name from the predominant feature, the Blue Mountains. Originally named the "Carmarthen Hills" and "Landsdowne Hills" in 1788, the distinctive blue haze surrounding the hills prompted a name change. The bluish color is believed to be caused by fine droplets of oil dispersed into the air by the many types of indigenous eucalyptus trees. In combination with dust particles and water vapor, visible blue spectrum sunlight is more predominantly reflected from the landscape.

Though named "mountains," the area does not contain mountains in the conventional sense but is more correctly described as a deeply incised sandstone plateau rising from less than 100 meters above sea level to 1,300 meters (328 to 4265 feet) at the highest point. There are basalt outcrops on the higher ridges. This plateau is thought to have enabled the survival of a rich diversity of plant and animal life by providing a refuge from climatic changes during recent geological history. It is particularly noted for its wide and balanced representation of eucalypt habitats from wet and dry sclerophyll, mallee heathlands, as well as localized swamps, wetlands, and grassland. Ninety-one species of eucalyptus (thirteen percent of the global total) occur in the Greater Blue Mountains Area. Twelve of these are believed to occur only in the Sydney sandstone region.

The area has been described as a natural laboratory for studying the evolution of the eucalyptus. The largest area of high diversity of this plant on the continent is located in the southeast, with the Greater Blue Mountains Area containing much of this diversity.

As well as supporting such a significant proportion of the world's eucalyptus species, the area provides examples of the range of structural adaptations of the eucalyptus to Australian environments. These vary from tall forests at the margins of rainforest in the deep valleys, through open forests and woodlands, to shrublands of stunted mallees on the exposed tablelands.

In addition to its outstanding eucalyptus, the Greater Blue Mountains Area also contains ancient, relict species of global significance. The most famous of these is the recently-discovered Wollemi pine, a "living fossil" dating to the age of the dinosaurs. Thought to have been extinct for millions of years, the few surviving trees of this ancient species are known only from three small populations located in remote, inaccessible gorges within the area. The Wollemi pine is one of the world's rarest species.

More than 400 different kinds of animals live within the rugged gorges and tablelands of the Area. These include threatened or rare species of conservation significance, such as the Tiger Quoll, the koala, the Yellow-bellied Glider and the Long-nosed Potoroo as well as rare reptiles including the Green and Golden Bell Frog and the Blue Mountains water skink. 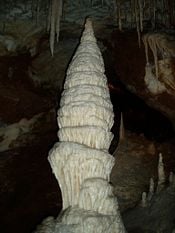 The Minaret at Jenolan Caves

The Jenolan Caves are an example of remarkable caverns in the Blue Mountains. These caves attract over 250,000 visitors a year, making it the most popular tourist location in rural New South Wales. They are the most celebrated of several similar groups in the limestone of the country and are believed to be the oldest discovered open caves in the world, estimated at approximately 340 million years old. They have not yielded fossils of great interest but the stalactitic formations, sometimes pure white, are of extraordinary beauty. Large portions of this extensive cave system are accessible only to cavers, especially those areas along the underground river system; but, there are ten caves at Jenolan that have been developed for regular tourism.

The Three Sisters sandstone rock formations are one of the best-known attractions in the Blue Mountains.

The Blue Mountains National Park lies on the eastern side of the Great Dividing Range. The plateau slopes gently down from west to east from a height of around 1100m (3610 ft) near Mt. Victoria to less than 200m (656 ft) around Glenbrook. There are four major rivers that have most of their catchment inside the park, two of which flow into Warragamba Dam, which is located just outside the park and is the major source of drinking water for Sydney. All of the major rivers flow from west to east.

Wollemi National Park contains the only known wild specimens of the Wollemi Pine (Wollemia nobilis), a species thought to have become extinct approximately thirty million years ago, but discovered alive in three small stands in 1994. Eucalyptus dominated open forests comprise 90 percent of Wollemi, with over 70 species of Eucalypt recorded. The remaining ten percent of the Park comprises rainforest, heath and grassland.

There are many aboriginal sites within the park including cave paintings, axe grinding grooves and rock carvings. In 2003 the discovery of Eagle's Reach cave was publicly announced. This site was found by bushwalkers in 1995 but remained unknown to the wider community until a team from the Australian Museum reached the cave in May 2003. The art within this small cave is estimated to be up to 4,000 years old and it consists of up to a dozen layers of imagery depicting a wide variety of motifs rendered in ochre and charcoal. The team who recorded this site counted over 200 separate images, mainly of animals and birds but also stencils of hands, axes and a boomerang. 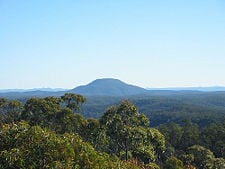 Yengo National Park, established in March 1988, is an area of steep gorges and rocky ridges within the Greater Blue Mountains Area. Its main feature, Mt. Yengo, is of cultural significance to local Aboriginal communities.

Nattai National Park is part of the Greater Blue Mountains Area, and primarily encompasses the valley of the Nattai River which is surrounded by spectacular sandstone cliffs. The park is covered in dry sclerophyll (hard leafed) forest—mostly eucalyptus, and has fairly frequent forest fires. It is largely an untouched wilderness area.

The park adjoins the Kanangra-Boyd National Park to its north. Lake Burragorang also borders the northern side of the park. The Nattai receives very few visitors, as it has virtually no facilities and is fairly remote, despite its proximity to Sydney.

Kalang Falls sits at the bottom of a hanging valley carved by the Kanangra Creek in Kanangra-Boyd National Park.

Kanangra-Boyd National Park, established in December 1969, is comprised of two land units, the elevated, gently undulating Boyd Plateau and the area of creeks, rivers, gorges and ridges into which the plateau falls away. Two of the features most spoken of in the Kanangra-Boyd National park are the Kanangra Falls and Kanangra Walls. Other well-known landmarks are Mount Cloudmaker and the Thurat Spires.

The Gardens of Stone National Park consists of varied terrain such as limestone outcrops and sandstone escarpments. Its most prominent features are pagoda rock formations where erosion has sculptured bee hive domes and curious arrays of other shapes.

Thirlmere Lakes National Park encompasses an area that has long been prized for its constant water supply and abundant wildlife. Its chain of five reed-fringed freshwater lakes are among the last undisturbed natural freshwater biotopes; the reeds are important nesting areas for waterfowl.

There are several urban centers near the Greater Blue Mountains Area though there are no residents within its boundaries. The Great Western Highway bisects the Area into northern and southern sections, and is the corridor along which residential and tourist centers are built. The only visitor centers within the protected area are in the Jenolan Caves Karst Conservation Reserve.

The Area has cultural associations with both indigenous cultures and the western colonization period. At first the mountains were seen by the early European settlers as an impediment to expansion. Eventually they came to be valued for recreation and wilderness appreciation, prompting conservation measures.

The Area's unique and diverse plant and animal life is considered an important record of the continent's evolution, especially that of the eucalyptus and plants associated with them. The development and survival of a broad and important range of different plant communities is due to the climate, topography and altitudinal range of the area.

New South Wales National Parks and Wildlife Service has primary responsibility for the management of the Area. Concerns include pollution from the growing development along the Great Western Highway, invasion by plant and animal pest species, fire management, and the environmental impact of mining. In spite of the concerns, this area of dramatic and sweeping scenery remains relatively pristine.

Retrieved from https://www.newworldencyclopedia.org/p/index.php?title=Greater_Blue_Mountains_Area&oldid=1091919
Categories:
Hidden category:
This page was last edited on 19 December 2022, at 02:27.
Content is available under Creative Commons Attribution/Share-Alike License; additional terms may apply. See Terms of Use for details.