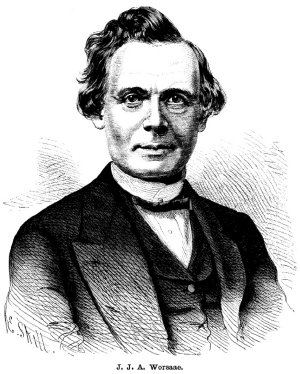 Jens Jacob Asmussen Worsaae (March 14, 1821 – August 15, 1885) was a Danish archaeologist who played a key role in the foundation of scientific archaeology. He gave scientific credibility to the prehistoric three-age system: Stone Age, Bronze Age, and Iron Age proposed by his mentor Christian Jürgensen Thomsen. Worsaae believed that cultural evolution could be measured not by writings, but through detailed study of the geographic and stratigraphic contexts of artifacts found in sites of early human occupation. In particular, he drew attention to objects found in graves, arguing that those were the articles in current use at the time of the person's death. He used this method to verify and refine Thomsen's tripartite classification.

Worsaae also contributed to the discussion on the origins of human populations around the world. He proposed a route by which prehistoric people spread from Africa, through Asia, across the Bering Strait to the Americas, and from South America to Australia and the South Sea islands. Thor Heyerdahl's Kon-Tiki expedition a century later proved the latter voyage to be possible. He suggested that Europe was populated later, with Scandinavia one of the last areas to be reached by humankind. Although not all of Worsaee's ideas have been accepted, his work and methods raised the level of professionalism in the young science of archaeology, allowing future researchers to uncover much information about past societies, bringing us all closer together as the one human family that Worsaae believed us to be.

Jens Jacob Asmussen Worsaae was born on March 14, 1821, in Vejle, Denmark. As a young boy he showed an interest in antiquities and studied stone monuments around Denmark. He was able to prove them to be tombs rather than altars, as was previously believed.

From 1838 to 1843 he assisted Christian Jürgensen Thomsen, curator of Danish antiquities in the National Museum of Denmark in Copenhagen.

In 1843 Worsaae published his famous Danmarks Oldtid oplyst ved Oldsager og Gravhøie (The Primeval Antiquities of Denmark), which became one of the most influential archaeological works of the nineteenth century. After that, under the commission of Christian VIII of Denmark, he traveled to Sweden, Austria, Germany, and Switzerland to study local artifacts there. In 1847, he was appointed inspector of Danish historic and prehistoric monuments.

During 1846 and 1847 Worsaae visited the British Isles, including Ireland, focusing his investigations on the Viking-age antiquities and monuments of Scandinavian origin. He published the results of his work in Minder om de Danske og Nordmændene i England, Skotland og Irland in 1851. In this work he formulated the concept of the "Viking Age."

During his fieldwork, Worsaae was able to perform the stratigraphic study which led him to believe that the three-age system (Stone, Bronze, and Iron ages), as formulated by Thomsen, was correct.

Worsaae became professor at the University of Copenhagen, joining its faculty in 1855. He succeeded Thomsen as curator at the National Museum in 1865.

Worsaae believed that cultural progress could be measured not by writings, but “as indicated by the appearance of pile-dwellings and other remains” (Worsaae, 1886). He argued that according to such evidence, during prehistory, humankind spread all around the world. Europe was settled much later, after people already reached distant parts of the world. According to Worsaae, Scandinavia was settled among the latest. He saw evidence for his claims in Stone Age artifacts, like those in India.

After moving to East Asia, Worsaae argued, humans migrated northward, eventually crossing the Bering Strait, and populating the Americas. After that, early humans found their way to Australia and the islands of the South Seas—the idea that a century later led Thor Heyerdahl to construct his Kon-Tiki raft and prove it possible. Worsaae also made distinction between Danish population—people who originally came from the south during the Stone Age—and tall people who later came from the north.

Worsaae argued that the human cultural continuum could be divided into three ages—the Stone, Bronze, and Iron Ages—an idea that he inherited from his mentor Christian Jurgensen Thomsen. Through careful stratigraphic studies, Worsaae was able to find evidence for his claims. He also subdivided the three-age system—he divided the Stone and Bronze Ages into two parts and the Iron Age into three.

Worsaae could not determine the precise age when the first humans appeared. He took with caution Charles Lyell's estimation that the human race was about 100,000 years old:

Yet this much is certain, the more our glance is directed to that epoch-making point of time, when the Creator wakened man in all his nakedness into life, and therefore most probably under a warmer sun in some more genial clime, the more does that point recede into an endlessly distant indefinable past (Worsaae, 1886).

Worsaae was a pioneer of palaeobotany, carefully collecting evidence from barrows, bogs, peat mosses, and from Danish kitchen middens.

Worsaae also established a method of dating artifacts found in gravesites, which is sometimes referred as the Worsaae’s Law. It states that the objects found in graves were in most cases things which were in use at the time the grave’s occupant lived. This Law was first stated by Worsaae in 1843, resting on the assumption that at the time of their death the deceased’s friends and relatives placed things in the grave which were used by the deceased. Those objects thus were as old as the deceased, and their examination could help determine the age when the graves were made.

Worsaae was one of the first professional archaeologists, whose work on prehistoric timeline helped establish three-age system as scientifically valid. His work was conducted with a high level of professionalism, examining in detail the geographic and stratigraphic contexts of each found archeological artifact, which was highly unusual for his times. He greatly helped archeology become more organized, professional, and empirically based.

By the end of the nineteenth century, Thomsen’s and Worsaae’s three-age system became universally recognized by the archaeological community. It was later adopted by modern archaeologists, like Oscar Montelius, who further refined it.