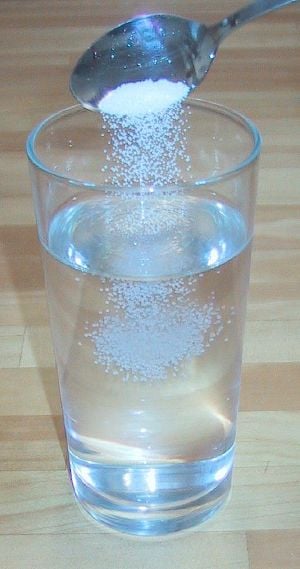 In chemistry, a solution is a combination of two or more substances to form a homogeneous mixture. The medium that dissolves the other substance is called the solvent; the substance that become dissolved is called the solute. The materials mixed together can be in the solid, liquid, or gaseous states.

Water is a common solvent that can dissolve many other substances. Thus a solution is produced when a solid such as table salt or sugar is dissolved in water. Also, gases such as carbon dioxide and oxygen can be dissolved in water. In addition, liquids may dissolve in other liquids, and gases in other gases. Alloys are examples of solid solutions.

If the solute and solvent exist in equal quantities, such as a 50:50 mixture of ethanol and water, the concepts of "solute" and "solvent" become less relevant. In such a case, the substance that is more often used as a solvent may be designated as the solvent—in this example, it would be water.

A simple test for the polarity of a liquid solvent is to rub a plastic rod, to induce static electricity. If this charged rod is held close to a running stream of the solvent and the solvent's path deviates, the solvent is polar.

Within a solution, molecules or ions of the solute become surrounded by solvent molecules. If the solvent molecules form relatively stable structures around the solute molecules, this process is known as solvation. For example, when table salt (sodium chloride) is dissolved in water, the polar water molecules surround each of the sodium ions (cations) and chloride ions (anions) to form relatively stable structures. Thus, solvation allows the solute-solvent interaction to remain stable.

The amount of a solute that will dissolve in a specific amount of solvent under given conditions is called the solubility of the solute in that solvent. When no more of a solute can be dissolved in a solvent, the solution is said to be saturated. However, the point at which a solution can become saturated depends significantly on environmental factors such as temperature, pressure, and contamination. Raising the solubility (for example by increasing the temperature) to dissolve more solute, and then lowering the solubility causes a solution to become supersaturated.

In general, the higher the temperature of a solvent, the more of a given solid solute it can dissolve. Some compounds, however, exhibit reverse solubility, which means that as the solvent gets warmer, less solute can be dissolved. Some surfactants exhibit this behavior. The solubility of liquids in liquids is generally less temperature-sensitive than that of solids or gases, while gases usually become less soluble with increasing temperature.

Unless two substances are fully miscible, there exists a concentration at which no further solute will dissolve in a solution. At this point, the solution is said to be saturated. If additional solute is added to a saturated solution, it will not dissolve. Instead, phase separation will occur, leading to either coexisting phases or a suspension. The point of saturation depends on many variables, such as ambient temperature and the precise chemical nature of the solvent and solute.

"Total dissolved solids" is a common term in a range of disciplines. It is expressed in different ways, depending on the analytical method used. In water quality, it refers to the amount of residue remaining after evaporation of water from a sample.

Retrieved from https://www.newworldencyclopedia.org/p/index.php?title=Solution_(chemistry)&oldid=687795
Categories:
Hidden category:
This page was last edited on 4 April 2008, at 01:20.
Content is available under Creative Commons Attribution/Share-Alike License; additional terms may apply. See Terms of Use for details.