Formic acid (systematic name methanoic acid) is the simplest carboxylic acid. Its formula is HCOOH or CH2O2. In nature, it is found in the stings and bites of many insects of the order Hymenoptera, particularly ants. Currently, it is used as a preservative in livestock feed, as an intermediate in chemical synthetic processes, and as the active ingredient in some household limescale removers. It is also a significant combustion product released by vehicles running on methanol mixed with gasoline. A salt or an ester of formic acid is called a formate or methanoate. The formate ion has the formula HCOO−.

This acid needs to be handled with care. Contact with liquid formic acid or its concentrated vapors can irritate and damage the skin, eyes, and respiratory tract.

As early as the fifteenth century, some alchemists and naturalists were aware that ant hills gave off an acidic vapor. In 1671, English naturalist John Ray became the first person to describe the isolation of formic acid by the distillation of large numbers of ants. These insects secrete the substance for attack and defense purposes. Thus the name "formic acid" was coined from the Latin word for ant, formica.

Formic acid was first synthesized from hydrocyanic acid by French chemist Joseph Gay-Lussac. In 1855, another French chemist, Marcellin Berthelot, developed a synthesis from carbon monoxide, a method similar to the one used today.

In the chemical industry, formic acid was long considered a compound of minor interest. In the late 1960s, however, significant quantities of it became available as a byproduct of acetic acid production. It is now increasingly used as a preservative and antibacterial in livestock feed.

Formic acid is miscible with water and most polar organic solvents, and somewhat soluble in hydrocarbons. Most simple formate salts are soluble in water.

Formic acid shares most of the chemical properties of other carboxylic acids, but it also displays several unique properties. For instance, under normal conditions, it will not form either an acyl chloride or an acid anhydride. Until very recently, all attempts to form either of these derivatives resulted in carbon monoxide instead. It has now been shown that the anhydride may be produced by reaction of formyl fluoride with sodium formate at −78°C. The chloride can be produced by passing HCl into a solution of 1-formimidazole in monochloromethane at −60°C[1]. In addition, formic acid shares some of the reducing properties of aldehydes.

Formic acid is unique among the carboxylic acids in its ability to participate in addition reactions with alkenes, producing formate esters. In the presence of certain acids, including sulfuric acid and hydrofluoric acid, however, another reaction (a variant of the Koch reaction) takes place, in which formic acid adds to the alkene to produce a larger carboxylic acid.

A significant amount of formic acid is obtained as a byproduct in the manufacture of other chemicals, especially acetic acid. As this production route is insufficient to meet the present demand, some formic acid must be produced for its own sake.

When methanol and carbon monoxide are combined in the presence of a strong base, the product is methyl formate, an ester of formic acid. The chemical equation may be written as:

In industry, this reaction is performed in the liquid phase at elevated pressure. Typical reaction conditions are 80°C and 40 atmospheres (atm) pressure. The most widely used base is sodium methoxide. Hydrolysis of the methyl formate produces formic acid:

Direct hydrolysis of methyl formate requires a large excess of water to proceed efficiently, and some producers use an indirect route.

In the laboratory, formic acid can be obtained by heating oxalic acid in anhydrous glycerol, extracting the product by steam distillation. Another preparation (which must be performed under a fume hood) is the acid hydrolysis of ethyl isonitrile using hydrochloric acid solution.[1][2]

The principal use of formic acid is as a preservative and antibacterial agent in livestock feed. When sprayed on fresh hay or other silage, it arrests certain decay processes and causes the feed to retain its nutritive value longer, and so it is widely used to preserve winter feed for cattle. In the poultry industry, it is sometimes added to feed to kill Salmonella bacteria.

The principal danger from formic acid is from skin or eye contact with liquid formic acid or with the concentrated vapors. Any of these exposure routes can cause severe chemical burns, and eye exposure can result in permanent eye damage. Inhaled vapors may similarly cause irritation or burns in the respiratory tract. Since carbon monoxide may also be present in formic acid vapors, care should be taken wherever large quantities of formic acid fumes are present. The U.S. OSHA Permissible Exposure Level (PEL) of formic acid vapor in the work environment is five parts per million parts of air (ppm).

Formic acid is readily metabolized and eliminated by the body. Nonetheless, some chronic effects have been documented. Some animal experiments have demonstrated it to be a mutagen, and chronic exposure may cause liver or kidney damage. Another possibility with chronic exposure is development of a skin allergy that manifests upon re-exposure to the chemical. 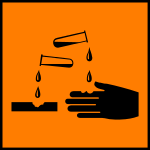