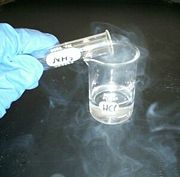 Vapors of hydrogen chloride in a beaker and ammonia in a test tube meet to form a cloud of a new substance, ammonium chloride.

A chemical equation is a symbolic representation of a chemical reaction, wherein one set of substances, called the reactants, is converted into another set of substances, called the products.[1] The reactants and products are shown using their chemical formulas, and an arrow is used to indicate the direction of the reaction. The reactants are usually placed to the left of the arrow, and the products are placed to the right. If the reaction is irreversible, a single arrow is used; if the reaction is reversible, a double arrow (pointing in opposite directions) is used.

The first chemical equation was diagrammed by Jean Beguin in 1615.

The combustion of methane in oxygen may be shown by the following equation:

The reaction of sodium metal with oxygen produces sodium oxide, as follows:

In the above equation, four sodium atoms react with one oxygen molecule to produce two molecules of sodium oxide.

The synthesis of ammonia from nitrogen and hydrogen by the Haber process is a reversible reaction:

When reading a chemical equation, several points need to be considered:

One may balance a chemical equation by changing the scalar number for each chemical formula in the equation. Also, in case of net ionic reactions, the same charge must be present on both sides of the unbalanced equation.

Simple chemical equations can be balanced by inspection, that is, by trial and error. Generally, it is best to balance the elements in the most complicated molecule first. Hydrogen, oxygen, and elements that occur in the form of single atoms are usually balanced toward the end.

For this equation to be balanced, there must be an equal number of Na atoms and O atoms on the left hand side as there are on the right hand side. Since Na occurs as a single atom on the left whereas O occurs only in molecules on both sides of the equation, it would be better to start by balancing the O atoms.

As it stands now, there are 2 O atoms on the left but only 1 on the right. To balance the O atoms, one places a 2 in front of the O on the right side:

This equation is a balanced equation because there is an equal number of atoms of each element on the left and right hand sides.

In this case, one may start by balancing the P atoms. The left side has 4 P atoms, but the right side has 2 P atoms. To balance the P atoms, one may place a 2 in front of P2O5. This step leads to the following equation:

Now the left side has 2 O's and the right side has 10 O's. To fix this unbalanced equation, one may place a 5 in front of the O2 on the left side, giving 10 O atoms on both sides of the equation:

Each element now has equal numbers of atoms on the two sides of the equation. Consequently, the equation is balanced.

This equation is more complex than the earlier examples and requires more steps. The most complicated molecule here is C2H5OH, so balancing begins by placing the coefficient 2 before the CO2 to balance the carbon atoms.

Finally the oxygen atoms must be balanced. Since there are 7 oxygen atoms on the right and only 3 on the left, a 3 is placed before O2, to produce the balanced equation:

In reactions involving many compounds, equations may be balanced using an algebraic method, based on solving sets of linear equations.

1. Assign variables to each coefficient. (Coefficients represent both the basic unit and mole ratios in balanced equations.):

2. There must be the same quantities of each atom on each side of the equation. So, for each element, count its atoms and let both sides be equal.

3. Solve the system (Direct substitution is usually the best way.)

which means that all coefficients depend on a parameter a, just choose a=1 (a number that will make all of them small whole numbers), which gives:

4. And the balanced equation at last:

To speed up the process, one can combine both methods to get a more practical algorithm:

1. Identify elements which occur in one compound in each member. (This is very usual.)

2. Start with the one among those which has a big index (this will help to keep working with integers), and assign a variable, such as a.

4. One can continue by writing the equations now (and having simpler problem to solve) or, in this particular case (although not so particular) one could continue by noticing that adding the Sulfurs yields 6a for H2SO4 and finally by adding the hydrogens (or the oxygens) one can find the lasting 6a for H2SO4.

5. Again, having a convenient value for a (in this case 1 will do, but if a results in fractional values in the other coefficients, one would like to cancel the denominators) The result is

Retrieved from https://www.newworldencyclopedia.org/p/index.php?title=Chemical_equation&oldid=1003183
Categories:
Hidden category:
This page was last edited on 8 February 2017, at 15:21.
Content is available under Creative Commons Attribution/Share-Alike License; additional terms may apply. See Terms of Use for details.