Nitrogen dioxide is a chemical compound with the formula NO2. It is one of the several nitrogen oxides. At ordinary temperatures and atmospheric pressure, it is a reddish-brown gas with a characteristic sharp, biting odor. It is one of the most prominent air pollutants and a poison by inhalation. This gas is present in small quantities in smog and automobile exhaust fumes. However, chemists find it useful as a catalyst, nitrating agent, and oxidizing agent. 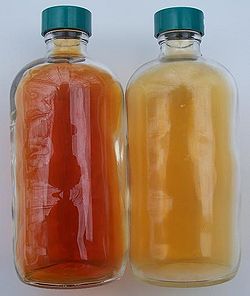 Nitrogen dioxide (NO2) gas converts to the colorless gas dinitrogen tetroxide (N2O4) at low temperatures, and converts back to NO2 at higher temperatures. Both bottles in this photograph contain equal amounts of gas at different temperatures.

Nitrogen dioxide (NO2) is prepared by simple reaction of nitric acid (HNO3) over copper metal. The reaction is the following:

Nitrogen dioxide is toxic by inhalation. Symptoms of poisoning (lung edema) tend to appear several hours after one has inhaled a low but potentially fatal dose. Also, low concentrations (4 ppm) will anesthetize the nose, thus creating a potential for overexposure.

Long-term exposure to NO2 at concentrations above 40–100 µg/m³ causes adverse health effects[1].

Nitrogen dioxide is formed in most combustion processes using air as the oxidant. At elevated temperatures nitrogen combines with oxygen to form nitrogen dioxide:

The most important sources of NO2 are internal combustion engines [2], thermal power stations and, to a lesser extent, pulp mills.[3]

The map shown below, depicting results of satellite measurements over Europe, illustrates nitrogen dioxide as large scale pollutant, with rural background ground level concentrations in some areas around 30 µg/m³, not far below unhealthful levels. Nitrogen dioxide plays a role in atmospheric chemistry, including the formation of tropospheric ozone. A recent study by researchers at the University of California, San Diego, suggests a link between NO2 levels and Sudden Infant Death Syndrome. [4] Oxidized (cationic) and reduced (anionic) derivatives of many of these oxides exist: nitrite (NO2−), nitrate (NO3−), nitronium or NO2+, and nitrosonium or NO+. NO2 is intermediate between nitrite and nitronium:

Retrieved from https://www.newworldencyclopedia.org/p/index.php?title=Nitrogen_dioxide&oldid=1087549
Categories:
Hidden category:
This page was last edited on 16 November 2022, at 02:27.
Content is available under Creative Commons Attribution/Share-Alike License; additional terms may apply. See Terms of Use for details.