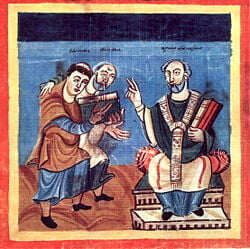 Alcuin, also known as Flaccus Albinus Alcuinus or Ealhwine (c. 735 – May 19, 804) was a scholar, theologian, churchman, poet, and teacher from York, England. He was born around 735 C.E. and became the student of Egbert at York. At the invitation of Charlemagne, he became a leading scholar and teacher at the Carolingian court, where he remained a figure at the court in the 780s and 790s. He wrote many theological and dogmatic treatises, as well as several grammatical works and a number of poems. A battler against heresy on the one hand, he was a promoter of freedom of conscience on the other, who influenced Charlemagne to remove the death penalty for pagans who refused to be baptized as Christians.

He was made abbot of the monastery of Saint Martin of Tours in 796, where he remained until his death. He is considered among the most important forces of the Carolingian Renaissance. Among his pupils were many of the dominant intellectuals of the Carolingian era.

Alcuin of York had a long career as a teacher and scholar, first at the school at York now known as Saint Peter's School, York (founded 627 C.E.) and later as Charlemagne's leading adviser on ecclesiastical and educational affairs. From 796 until his death he was abbot of the great monastery of St. Martin of Tours.

Alcuin came to the cathedral school of York in the golden age of Egbert, Archbishop of York and Eadberht of Northumbria. Egbert had been a disciple of the Venerable Bede and Eadbert, the king, was his brother. These two men oversaw the re-energizing and reorganization of the English church and reformation of the clergy, emphasizing the tradition of learning begun under Bede. Alcuin thrived under Egbert’s tutelage. It was in York that he formed his love of classical poetry, although he was sometimes troubled by the fact that it was written by non-Christians.

The York school was renowned as a center of learning not only in religious matters but also in the liberal arts, literature and science named the seven liberal arts. It was from here that Alcuin drew inspiration for the school he would lead at the Frankish court. He revived the school with disciplines such as the trivium and the quadrivium. Two codices were written, by himself on the trivium, and by his student Hraban.

Alcuin graduated from student to teacher sometime in the 750s. His ascendancy to the headship of the York school began after Aelbert became Archbishop of York in 767. Around the same time Alcuin became a deacon in the church. He was never ordained as a priest. Although he lived as a monk, there is no record of his ever formally becoming one. 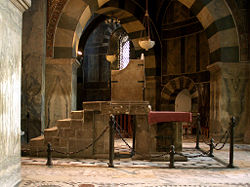 Charlemagne's throne at Aachen, where Alcuin taught at the Palace School

In 781, King Elfwald sent Alcuin to Rome to petition the Pope for official confirmation of York’s status as an archbishopric and to confirm the election of a new archbishop, Eanbald I. On his way home, Alcuin met Charles, king of the Franks, known to history as Charlemagne. Alcuin was reluctantly persuaded to join Charles's court. He was to join an already illustrious group of scholars that Charles had gathered around him, including Peter of Pisa, Paulinus, Rado, and Abbot Fulrad. He would later write that "the Lord was calling me to the service of King Charles."

Alcuin was welcomed at the Palace School of Charlemagne. The school had been founded under the king’s ancestors as a place for educating the royal children, mostly in manners and the ways of the court. However, King Charles wanted a broader curriculum, including the study of literature and religion. From 782 to 790, Alcuin had as pupils Charlemagne himself, his sons Pepin and Louis, young nobles sent to the court for their education, and the young clerics attached to the palace chapel. Bringing with him from York his assistants Pyttel, Sigewulf, and Joseph, Alcuin revolutionized the educational standards of the Palace School, introducing Charlemagne to the liberal arts and creating a personalized atmosphere of scholarship and learning to the extent that the institution came to be known as the "school of Master Albinus."

Charlemagne was a master at gathering the best men of every nation in his court, making many of them his closest friends and counselors. They referred to him as "David," a reference to the biblical king. Alcuin soon found himself on intimate terms with the king and the other men at court to whom he gave nicknames. Alcuin himself was known as "Albinus" or "Flaccus."

Alcuin’s friendships also extended to the ladies of the court, especially the queen mother and the daughters of the king. His relationships with these women, however, never reached the intense level of those with the men around him. 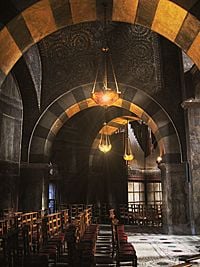 Charlemagne's chapel at Aachen, whose chaplains were taught by Alcuin

In 790, Alcuin went back to England, to which he had always been greatly attached. He dwelt there for some time, but Charlemagne then invited him back to help in the fight against the revitalized Adoptionist heresy which was at that time making great progress in Toledo, Spain, the old capital town of the Visigoths and still a major city for the Christians under Islamic rule in Spain. He is believed to have had contacts with Beatus of Liébana, from the Kingdom of Asturias, who fought against Adoptionism. At the Council of Frankfurt in 794, Alcuin upheld the orthodox doctrine, and obtained the condemnation of the heresiarch Felix of Urgel.

Having failed during his stay in England to influence King Aethelraed of Northumbria in the conduct of his reign, Alcuin never returned to live in England. He was back at Charlemagne's court by at least mid-792, writing a series of letters to Aethelraed, to Bishop Hygbald of Lindisfarne, and Archbishop of Canterbury Aethelheard in the succeeding months, dealing with the attack on Lindisfarne by Viking raiders in July 792. These letters, and Alcuin's poem on the subject De clade Lindisfarnensis monasterii provide the only significant contemporary account of these events.

In 796, Alcuin was in his sixties. He wished to be free from court duties and was given the chance when Abbot Itherius of the monastery of Saint Martin of Tours died. King Charles gave the abbey into Alcuin's care with the understanding that Alcuin should be available if the king ever needed his counsel.

Alcuin made the abbey school at Saint Martin's of Tours into a model of excellence, and many students flocked to it. He had many manuscripts copied, the calligraphy of which is of outstanding beauty. He wrote many letters to his friends in England, to Arno, bishop of Salzburg, and above all to Charlemagne. These letters, of which 311 are extant, are filled mainly with pious meditations, but they also form a mine of information as to the literary and social conditions of the time. They are considered the most reliable authority for the history of humanism in the Carolingian age. Alcuin also trained the numerous monks of the abbey in piety, and it was in the midst of these pursuits that he died.

Alcuin died on May 19, 804, some ten years before the emperor. He was buried at Saint Martin’s Church under an epitaph that partly read: 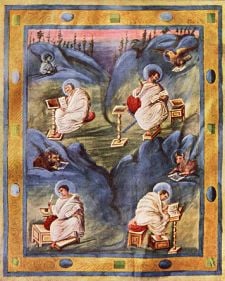 The Aachen Gospels, from c. 820, were likely the work of Alcuin's students.

Alcuin is the most prominent figure of the Carolingian Renaissance, in which three main periods have been distinguished: in the first of these, up to his time at the court, the Italians occupy the central place; in the second, Alcuin and the Anglo-Saxons are dominant; in the third, which begins in 804, the influence of Theodulf the Visigoth is preponderant.

Alcuin left several manuals used in his educational work, a grammar, and works on rhetoric and dialectics. They are written in the form of dialogues, and in the two last the interlocutors are Charlemagne and Alcuin. He also wrote several theological treatises: a De fide Trinitatis, commentaries on the Bible, and others.

Alcuin transmitted to the Franks the knowledge of Latin culture which had existed in England. The significance of his letters is very important, constituting a valuable and sometimes unique historical source. His poetry is equally interesting, particularly a whole history in verse of the church at York: Versus de patribus, regibus et sanctis Eboracensis ecclesiae.

Although called upon to combat the Adoptionist heresy, Alcuin was also an advocate on behalf of freedom of conscience. As chief adviser to Charles the Great, he bravely confronted the emperor over his policy of forcing pagans to be baptized on pain of death. He argued, “Faith is a free act of the will, not a forced act. We must appeal to the conscience, not compel it by violence. You can force people to be baptized, but you cannot force them to believe.” His arguments prevailed; Charlemagne abolished the death penalty for paganism in 797 (Needham, 2000, 52).

Alcuin College, part of the University of York, is named after him. The Alcuin Society brings together lovers of books and awards in an annual prize for excellence in book design.

Retrieved from https://www.newworldencyclopedia.org/p/index.php?title=Alcuin&oldid=1052636
Categories:
Hidden category:
This page was last edited on 15 May 2021, at 09:31.
Content is available under Creative Commons Attribution/Share-Alike License; additional terms may apply. See Terms of Use for details.