Chloral hydrate is a colorless, solid chemical compound with the formula C2H3Cl3O2. It is soluble in both water and alcohol, readily forming concentrated solutions.

The name chloral hydrate suggests that it is the hydrate of chloral (trichloroacetaldehyde)—in other words, it could be formed by the addition of water to chloral. The usual method of production, however, is by the reaction of chlorine and ethanol in acidic solution. In addition, it is a minor by-product of the chlorination of water in the presence of organic residues.

Chloral hydrate functions as a sedative and hypnotic drug, as well as being a chemical reagent and precursor for other chemical compounds. It has been used as a clearing agent of chitin (and fibers), and as a key ingredient of Hoyer's mounting medium, which is useful for slide-mounted observation of organisms under the microscope. On the downside, an overdose of the substance can lead to convulsions, vomiting, drowsiness, irregular breathing, cardiac arrhythmia, and liver damage, and it is moderately addictive. Alcoholic drinks have sometimes been laced with chloral hydrate to incapacitate a person. In slang, this has been referred to as serving someone a "Mickey Finn," or "slipping a mickey."

Discovery and early use

Chloral hydrate was discovered through the chlorination of ethanol in 1832 by Justus von Liebig in Gießen.[1][2] Its sedative properties were first published in 1869 and subsequently, because of its easy synthesis, it was widely used.[3] It was widely abused and misprescribed in the late nineteenth century.

Chloral hydrate is a colorless, crystalline solid that melts at 57 °C and boils at 98 °C. Its density is 1.91 g/cm3. It is readily soluble in water and ethanol. When heated, it decomposes to generate toxic fumes, including hydrogen chloride (HCl gas). It undergoes reactions with strong bases to produce chloroform.

Together with chloroform, chloral hydrate is a minor by-product of the chlorination of water, if organic residues are present in the water. Concentrations rarely exceed 5 micrograms per liter (µg/l).

In therapeutic doses for insomnia, chloral hydrate is effective within sixty minutes. It is metabolized within 4 minutes into trichloroethanol by erythrocytes and plasma esterases, and many hours later into trichloroacetic acid. Higher doses can depress respiration and blood pressure. An overdose is marked by confusion, convulsions, nausea and vomiting, severe drowsiness, slow and irregular breathing, cardiac arrhythmia and weakness. It may also cause liver damage and is moderately addictive, as chronic use is known to cause dependency and withdrawal symptoms. The chemical can potentiate various anticoagulants and is weakly mutagenic in vitro and in vivo.

Chloral hydrate is a cheaply available starting material for the production of other chemicals. For instance, chloral is produced by the distillation of a mixture of chloral hydrate and sulfuric acid, the latter serving as a desiccant.

Notably, it is used to synthesize isatin. In this synthesis, chloral hydrate reacts with aniline and hydroxylamine to give a condensation product that cyclizes in sulfuric acid to give the target compound:[4] 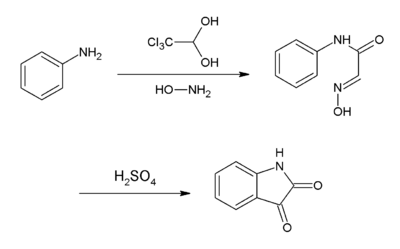 Chloral hydrate is used for the short-term treatment of insomnia and as a sedative before minor medical or dental treatment. It was largely displaced in the mid-twentieth century by barbiturates[5] and subsequently by benzodiazepines. It was also formerly used in veterinary medicine as a general anesthetic. Today, it is commonly used as an ingredient in the veterinary anesthetic Equithesin. It is also still used as a sedative prior to electroencephalography (EEG) procedures, as it is one of the few available sedatives that does not suppress epileptiform discharges.

Chloral hydrate is also an ingredient used for Hoyer's solution, a slide-mounting medium for microscopic observation of diverse organisms such as bryophytes, ferns, seeds, and small arthropods (especially mites). One recipe for making Hoyer's is dissolving gum arabic (30.0 g) in water (50.0 ml), then adding chloral hydrate (200.0 g), and then finally adding glycerol (16.0 ml).

Advantages of Hoyer's medium include its excellent refraction index and clearing (macerating) properties of small specimens. (It is especially advantageous if specimens require observation with Nomarski optics.) The major disadvantage of Hoyer's is its susceptibility to the effects of hydration, which causes the mountant to crystallize, threatening the slide to become unusable. It is therefore absolutely necessary, after drying a mounted specimen, to thoroughly ring (2 layers are best) cover slips with a protective coating (such as insulating Glyptol), which prevents rehydration and mountant deterioration.

Chloral hydrate reportedly does not effectively clear larger specimens, or arthropods that are more heavily sclerotized (such as larger insects). These should first be cleared with another product (such as 10 percent KCl), and then mounted in Hoyer's. Other disadvantages of Hoyer's (principally due to chloral hydrate) include toxicity (noted above), and procurement problems because chloral hydrate is a controlled substance.