Acetylene (systematic name: ethyne) is a hydrocarbon belonging to the group of alkynes. It is considered to be the simplest of all alkynes as it consists of two hydrogen atoms and two carbon atoms. Acetylene is an unsaturated organic compound because its four atoms are triple bonded through a covalent bond.

Acetylene was discovered in 1836 by Edmund Davy who identified it as a "new carburet of hydrogen." It was rediscovered in 1860 by French chemist Marcellin Berthelot, who coined the name "acetylene." The Nobel Laureate Gustaf Dalén was blinded by an acetylene explosion.

Calcium carbide (or calcium acetylide) and water are then reacted by any of several methods to produce acetylene and calcium hydroxide. This reaction was discovered by Friedrich Wohler in 1862.

Calcium carbide synthesis requires an extremely high temperature, ~2000 degrees Celsius, so the reaction is performed in an electric arc furnace. This reaction was an important part of the industrial revolution in chemistry that occurred as a product of massive amounts of cheap hydroelectric power liberated from Niagara Falls before the turn of the ninteenth century.

Acetylene can also be manufactured by the partial combustion of methane with oxygen, or by the cracking of hydrocarbons.

Berthelot was able to prepare acetylene from methyl alcohol, ethyl alcohol, ethylene, or ether, when he passed any one of these as a gas or vapor through a red-hot tube. Berthelot also found acetylene was formed by sparking electricity through mixed cyanogen and hydrogen gases. He was also able to form acetylene directly by combining pure hydrogen with carbon using electrical discharge of a carbon arc.

The carbon-carbon triple bond leaves the carbon atoms with two sp hybrid orbitals for sigma bonding, placing all four atoms in the same straight line, with CCH bond angles of 180°.

Above 400 °C(673 K) (which is quite low for a hydrocarbon), the pyrolysis of acetylene will start. The main products are the dimer vinylacetylene (C4H4) and benzene. At temperatures above 900 °C(1173 K), the main product will be soot.

Using acetylene, Berthelot was the first to show that an aliphatic compound could form an aromatic compound when he heated acetylene in a glass tube to produce benzene with some toluene. Berthelot oxidized acetylene to yield acetic acid and oxalic acid. He found acetylene could be reduced to form ethylene and ethane.

Polymerization of acetylene with Ziegler-Natta catalysts produces polyacetylene films. Polyacetylene, a chain of carbon molecules with alternating single and double bonds, was the first organic semiconductor to be discovered; reaction with iodine produces an extremely conductive material.

Walter Reppe also discovered that acetylene can react at high pressures with heavy metal catalysts to give industrially significant chemicals: 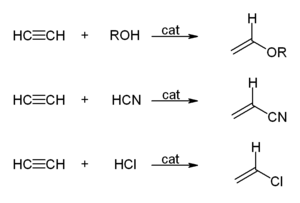 This is industrially used to produce 1,4-butynediol from formaldehyde and acetylene:

Approximately 80 percent of the acetylene produced annually in the United States is used in chemical synthesis. The remaining 20 percent is used primarily for oxyacetylene gas welding and cutting due to the high temperature of the flame; combustion of acetylene with oxygen produces a flame of over 3300 °C (6000 °F), releasing 11.8 kJ/g. Oxyacetylene is the hottest burning fuel gas. (Only solid fuels can produce a higher temperature chemical flame.)

Acetylene is also used in the acetylene ('carbide') lamp, once used by miners (not to be confused with the Davy lamp), on vintage cars, and still sometimes used by cavers. In this context, the acetylene is generated by dripping water from the upper chamber of the lamp onto calcium carbide (CaC2) pellets in the base of the lamp.

In former times a few towns used acetylene for lighting, including Tata in Hungary where it was installed on July 24, 1897, and North Petherton, England in 1898.

In modern times acetylene is sometimes used for carburization (that is, hardening) of steel when the object is too large to fit into a furnace.

Acetylene has been proposed as a carbon feedstock for molecular manufacturing using nanotechnology. Since it does not occur naturally, using acetylene could limit out-of-control self-replication.

Acetylene is used to volatilize carbon in radiocarbon dating. The carbonaceous material in the archeological sample reacted in a small specialized research furnace with lithium metal to form lithium carbide (also known as lithium acetylide). The carbide can then be reacted with water, as usual, to form acetylene gas to be fed into mass spectrometer to sort out the isotopic ratio of carbon 14 to carbon 12.

The use of acetylene is expected to continue a gradual increase in the future as new applications are developed. One new application is the conversion of acetylene to ethylene for use in making a variety of polyethylene plastics. In the past, a small amount of acetylene had been generated and wasted as part of the steam cracking process used to make ethylene. A new catalyst developed by Phillips Petroleum allows most of this acetylene to be converted into ethylene for increased yields at a reduced overall cost.[1]

Due to the carbon-to-carbon triple bond, acetylene gas is fundamentally unstable, and will decompose in an exothermic reaction if compressed to any great extent. Acetylene can explode with extreme violence if the pressure of the gas exceeds about 100 kPa (≈14.5 psi) as a gas or when in liquid or solid form, so it is shipped and stored dissolved in acetone or dimethylformamide (DMF), contained in a metal cylinder with porous filling (Agamassan), which renders it safe to transport and use.

There are strict regulations on the shipment of dangerous gas cylinders throughout the world. The use of dissolved acetylene is decreasing rapidly, due to favorable flameless welding processes.

Inhaling acetylene may cause dizziness, headache and nausea. [2] It may also contain toxic impurities: the Compressed Gas Association Commodity Specification for acetylene has established a grading system for identifying and quantifying phosphine, arsine, and hydrogen sulfide content in commercial grades of acetylene in order to limit exposure to these impurities.[3] The sulfur, phosphorus and arsenic are carryovers from the synthesis ingredient coke, an impure form of carbon and different, organic impurities would be expected from the thermal cracking of hydrocarbons source.

While the impurities in acetylene can be toxic and even fatal, pure acetylene is of a very low toxicity (not counting the "narcotic" effects). Up to 80 percent, (v/v) acetylene has been administered to surgical patients as a general anaesthetic. The trade name for acetylene was "narcylene." It was used a fair amount experimentally in Germany in their impoverished 1920s, perhaps on several thousand patients. Medically, acetylene was considered to be nearly as safe as nitrous oxide and with a slightly higher potency, allowing for the use of higher percentages of oxygen in the blend; it is about 50 percent more potent. However, the use of acetylene and oxygen mixtures was dropped after several gas explosions inside patients' lungs. The energy of these explosions would be expected to exceed any of the flammable inhalation anesthetics due to the instability of the triple bond (cyclopropane would be nearly as bad). It was suggested that such an internal thorax explosion could not occur with air mixtures (without purified oxygen).

Acetylene has been infrequently abused in a manner akin to nitrous oxide abuse up through modern times, according to the literature. Such abuse can result in the death of the abuser due to toxicity of the above mentioned impurities phosphine, arsine, and hydrogen sulfide. Since the gas is charged (absorbed) into tanks soaked with acetone over a solid matrix, some acetone comes out with the gas, further contributing to the poisonings. The driver for this abusive behavior is better understood with the view of acetylene's anesthetic properties and addictive behaviors.

Mixtures with air containing between 3 percent and 82 percent acetylene are explosive on ignition. The minimum ignition temperature is 335 °C.[2] The majority of acetylene's chemical energy is what is not contained in the carbon-carbon triple bond; that is, it is greater than that of three carbon-carbon bonds spread out, but is disallowed therefrom because of the spaces between its mate carbon and all other carbons likewise shielded in charge.

Sometimes the plural "acetylenes" may refer to the class of organic chemical compounds known as alkynes which contain the -C≡C- group.

Acetylene is a moderately common chemical in the universe, often associated with the atmospheres of gas giants. One curious discovery of acetylene is on Enceladus, a tiny moon of Saturn. Natural acetylene is believed to form from either catalytic decomposition of long chain hydrocarbons or at temperatures ≥ 1,770 kelvin. Since the latter is highly unlikely to exist on such a tiny, distant body, this discovery is potentially suggestive of catalytic reactions within the moon, making it a promising site to search for prebiotic chemistry.[4]