The chemical compound ammonium nitrate, the nitrate of ammonia with the chemical formula NH4NO3, is a white powder at room temperature and standard pressure. It is commonly used in agriculture as a high-nitrogen fertilizer, and it has also been used as an oxidizing agent in explosives, especially improvised explosive devices.

Industrial production is chemically quite simple, although technologically challenging. The acid-base reaction of ammonia with nitric acid gives a solution of ammonium nitrate: HNO3(aq) + NH3(g) → NH4NO3(aq). For industrial production, this is done using anhydrous ammonia gas and concentrated nitric acid. This reaction is violent and very exothermic. It should never be attempted by amateurs or in improvised equipment using such concentrated materials, though with plenty of dilution by water, it could be considered easy. After the solution is formed, typically at about 83 percent concentration, the excess water is evaporated to an ammonium nitrate (AN) content of 95 to 99.9 percent concentration (AN melt), depending on grade. The AN melt is then made into "prills" or small beads in a spray tower, or into granules by spraying and tumbling in a rotating drum. The prills or granules may be further dried, cooled, and then coated to prevent caking. These prills or granules are the typical AN products in commerce. The processes involved are simple in principle, but certainly not easy.

The Haber process combines nitrogen and hydrogen to produce ammonia, part of which can be oxidized to nitric acid and combined with the remaining ammonia to produce the nitrate. Another production method is used in the so-called Odda process.

Transformations of the crystal states due to changing conditions (temperature, pressure) affect the physical properties of ammonium nitrate. The following crystalline states have been identified [1]: 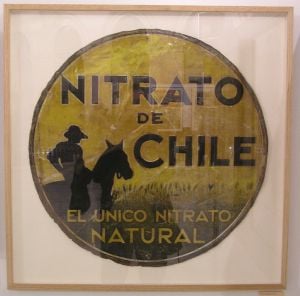 The most common use of ammonium nitrate is in fertilizers. This is due to its high nitrogen content—a desirable feature for fertilizers, as plants require nitrogen to make proteins—and inexpensive industrial manufacture.

Products of Ammonium nitrate reactions are used in Airbags. Sodium azide (NaN3) is the chemical used in airbags, as it decomposes to Na (s) and N2 (g).

Ammonium nitrate is used in the treatment of some titanium ores.

Ammonium nitrate is used in the preparation of nitrous oxide (N2O):

Ammonium nitrate is used in survival kits mixed with zinc dust and ammonium chloride because it will ignite on contact with water.

Ammonium nitrate can be used to make anhydrous ammonia, a chemical often used in the production of methamphetamine.

As a strong oxidizing agent, ammonium nitrate makes an explosive mixture when combined with a fuel such as a hydrocarbon, usually diesel fuel (oil) or, sometimes, kerosene. Because ammonium nitrate and fuel oil (ANFO) are readily available in bulk, ANFO mixtures have occasionally been used for improvised bombs—for example by the Provisional IRA and in the Oklahoma City bombing.

Ammonium nitrate is used in military explosives such as the daisy cutter bomb, and as a component of amatol. Military mixtures are often spiked with about 20 percent aluminum powder as well, increasing the blast power, but with some loss of brisance. One example of this is Ammonal, which contains ammonium nitrate, TNT & aluminum. Aluminized mixtures are very effective under confinement, as in underwater demolition, torpedoes, and rock blasting. Very cheap water-based blasting slurries tap the power of an aluminum-water reaction with enough ammonium nitrate added to burn off the resulting hydrogen.

Ammonium nitrate is also an explosive in its purest form although it is an unusually insensitive one. Explosive properties become much more evident at elevated temperatures. When ammonium nitrate is fused and "boiled" to generate nitrous oxide, it has been claimed to be as sensitive as dynamite at about the 240 °C operating temperature.

This exothermic reaction can run away and reach detonation velocities (without proper temperature controls). The extent of this possibility has been demonstrated several times, most notably at the Ohio Chemical plant in Montreal in 1966. Millions of pounds of relatively pure ammonium nitrate have been (accidentally) detonated when subjected to severe heat and/or shocks (see "Disasters" below). Ammonium nitrate has also found use as a solid rocket propellant, but for a while ammonium perchlorate was frequently considered preferable due to higher performance and faster burn rates. Lately, favor has been swinging back towards ammonium nitrate in rocketry, as it delivers almost as much thrust without producing an exhaust jet full of gaseous hydrochloric acid (HCl) and without the extra expense and sensitivity hazards. Fertilizer-grade ammonium nitrate (FGAN) is manufactured in more compact form, with much lower porosity, in order to achieve greater stability and lower sensitivity to detonation, whereas technical grade ammonium nitrate (TGAN) prills are made to be porous for better absorption of fuel and higher reactivity.

Ammonium nitrate decomposes into gases including oxygen when heated (non-explosive reaction); however, ammonium nitrate can be induced to decompose explosively by detonation. Large stockpiles of the material can be a major fire risk due to their supporting oxidation, and may also detonate, as happened in the Texas City disaster of 1947, which led to major changes in regulations for storage and handling.

There are two main types of incidents that result in explosions:

Pure, compact ammonium nitrate is stable, but it decomposes at temperatures above 210 °C. It stops decomposing once the heat source is removed, but when catalysts are present (including combustible materials, acids, metal ions, or chlorides), the reaction can become self-sustaining (known as "self-sustaining decomposition," SSD). This is a well-known hazard with some types of NPK fertilizers and is responsible for the loss of several cargo ships.

Some examples of disasters involving ammonium nitrate are given below.

Retrieved from https://www.newworldencyclopedia.org/p/index.php?title=Ammonium_nitrate&oldid=1055619
Categories:
Hidden category:
This page was last edited on 21 July 2021, at 16:14.
Content is available under Creative Commons Attribution/Share-Alike License; additional terms may apply. See Terms of Use for details.