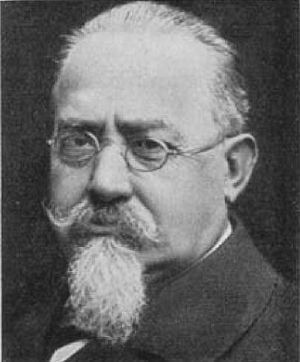 Cesare Lombroso (November 6, 1835 – October 19, 1909) was the founder of the Italian School of Positivist Criminology. He rejected the established Classical School, which held that crime was a characteristic trait of human nature and that rational choices were the foundation of behavior. Lombroso, using a scientific approach and concepts drawn from physiognomy, early eugenics, psychiatry, and Social Darwinism, argued that criminality was inherited, and that the "born criminal" could be identified by physical defects, which confirmed a criminal as "savage," or "atavistic." While his particular identifying characteristics are no longer considered valid, the idea of factors that predispose certain individuals to commit crime continues to be foundational to work in criminology. Together with his emphasis on the scientific method, this revolutionary approach has earned Lombroso the title "father" of scientific criminology.

Cesare Lombroso was born Ezechia Marco Lombroso in Verona, Italy on November 6, 1835. The son of a long line of rabbis, he studied literature, linguistics, and archaeology at the Universities of Padua, Vienna, and Paris.

He finally graduated with a degree in medicine from the University of Turin and became a neuro-psychiatrist. During the Austro-Italian war of 1859, also known as the Second War for Italian Independence (the first war being the Austro-Sardinian War of 1849), Lombroso served as an army physician.

In 1862, he was appointed professor of diseases of the mind at Pavia and later took charge of the insane asylum at Pesaro. He eventually became professor of medical law and psychiatry at Turin. There he conducted detailed anthropomometric studies using cadavers, to focus on the shape of the skull as an indicator of abnormality. These studies originated with the German physician Franz Joseph Gall, who had dealt in phrenology, and innate sociopathology.

On April 10, 1870, he married Nina De Benedetti. They had five children including Gina, who edited and published her father’s later works after his death.

Early in his career Lombroso was a staunch materialist, admitting in his 1909 work After Death - What?:

If ever there was an individual in the world opposed to spiritism by virtue of scientific education, and I may say, by instinct, I was that person. I had made it the indefatigable pursuit of a lifetime to defend the thesis that every force is a property of matter and the soul an emanation of the brain. (Lombroso 1909)

He was later forced to considerably alter his views after extensive study of the phenomenon of Eusapia Palladino, a famous spiritualist. He later wrote, "I am ashamed and grieved at having opposed with so much tenacity the possibility of the so-called spiritistic facts."

Cesare Lombroso was famous in the nineteenth century because he claimed to have discovered the cause of crime. His principal work, L’Uomo delinquente or The Criminal Man, was published in 1876. He wrote a good deal more including, in French, Le Crime, Causes et Remèdes.

In these books, Lombroso claimed that anatomical investigations of the post mortem bodies of criminals revealed that they were physically different from normal people. He maintained that criminals have stigmata (signs), and that these stigmata consist of abnormal dimensions of the skull and jaw. Lombroso even claimed that different criminals have different physical characteristics which he could discern. His book, The Criminal Man, achieved six editions.

In time, and under the influence of his son-in-law, Guglielmo Ferrero, Lombroso included the view that social factors were also involved in the causation of crime and that all criminality is not inborn.

The concept of atavism

If one term is associated with Lombroso it is "atavism." This was the term he used for persons who were not fully evolved. He considered these people "throwbacks" to earlier forms of man or primates. He based this idea on his findings that in the skulls, brains, and other parts of the skeletons, muscles, and viscera of criminals there were anatomical peculiarities.

The central idea of Lombroso's work came to him as he autopsied the body of a notorious Italian criminal named Giuseppe Villela. As he contemplated Villela's skull, he noted that certain characteristics (specifically, a depression on the occiput that he named the median occipital fossa) reminded him of the skulls of "inferior races" and "the lower types of apes, rodents, and birds." He concluded that the principle cause of criminal tendencies was organic in nature—heredity was the key cause of deviance. The term Lombrosos used to describe the appearance of those resembling ancestral, prehuman forms of life was "atavism."

"Born criminals" were thus viewed by Lombroso in his earliest writings as a form of human sub-species. In his later writings, however, he began to regard them less as evolutionary throwbacks and more in terms of arrested development and degeneracy.

Lombroso popularized the notion of a "born criminal" through biological determinism: criminals have particular physiognomic attributes or deformities. Physiognomy attempts to estimate character and personality traits from physical features of the face or the body. In Lombroso's view, whereas most individuals evolve, the violent criminal had devolved, and therefore constituted a societal or evolutionary regression.

If criminality was inherited, then Lombroso proposed that the "born criminal" could be distinguished by physical atavistic stigmata, such as:

Lombroso concentrated on a purported scientific methodology in order to identify criminal behavior and isolate individuals capable of the most violent types of crime. He advocated the study of individuals using measurements and statistical methods in compiling anthropological, social, and economic data.

With successive research and more thorough statistical analysis, Lombroso modified his theories. He continued to define atavistic stigmata, and in addition, he identified two other types of criminal: the insane criminal, and the "criminaloid." Although insane criminals bore some stigmata, they were not born criminals; rather they became criminal as a result "of an alteration of the brain, which completely upsets their moral nature." Among the ranks of insane criminals were kleptomaniacs and child molesters. Criminaloids had none of the physical peculiarities of the born or insane criminal and became involved in crime later in life, and tended to commit less serious crimes. Criminaloids were further categorized as habitual criminals, who became so by contact with other criminals, the abuse of alcohol, or other "distressing circumstances."

Lombroso was an advocate for humane treatment of criminals, arguing for the removal of atavistic, born criminals from society for their own and society's protection, for rehabilitation for those not born criminal, and against capital punishment.

Lombroso's studies of female criminality began with measurements of female skulls and photographs, searching for atavism. He concluded, however, that female criminals were rare and showed few signs of degeneration because they had “evolved less than men due to the inactive nature of their lives.”

Lombroso argued it was females' natural passivity that withheld them from breaking the law, as they lacked the intelligence and initiative to become criminal (Lombroso 1980).

Lombroso supported a common origin of criminality, genius, and epilepsy as caused by factors impairing the embryonic development of the central nervous system (CNS), mainly affecting the hierarchically superior neural centers. In 1896, together with his coworkers, Lombroso was the first to describe the observations of cortical dysplasia in patients with epilepsy.

To confirm his theories, Lombroso emphasized the need for the direct observation of the patient, using anthropological, social, neurophysiological, economic, and pathological data. With the collaboration of his student, Luigi Roncoroni, Lombroso described a prevalence of giant pyramidal neurons and polymorphous cells through the gray matter of the frontal cortex in 13 patients with epilepsy. Most of the large pyramidal neurons were haphazardly arranged, presenting also an abnormal orientation of their apical dendrites. The number of nerve cells was noticeably reduced, with the presence of abundant gliosis. Moreover, the granular layers were dramatically reduced or absent in most patients, and numerous nerve cells were present in the subcortical white matter. This particular finding had never been observed in specimens from criminal and healthy control subjects. Lombroso and Roncoroni explained their finding as evidence of an arrest of CNS development.

Thus, more than one century ago, Cesare Lombroso and collaborators described developmental lesions in the frontal cortex of patients with epilepsy, corresponding to what came to be called Taylor's dysplasia.

Psychiatric art and problem of genius

Lombroso published The Man of Genius (1889) in which he argued that artistic genius was a form of hereditary insanity. In order to support this assertion, he began assembling a large collection of psychiatric art. He published an article on the subject in 1880, in which he isolated thirteen typical features of the "art of the insane." Although his criteria are generally regarded as outdated today, his work inspired later writers on the subject, particularly Hans Prinzhorn.

Lombroso's words reveal his true beliefs vis-à-vis the problem of the genius and the ordinary man:

The appearance of a single great genius is more than equivalent to the birth of a hundred mediocrities...Good sense travels on the well-worn paths; genius, never. And that is why the crowd, not altogether without reason, is so ready to treat great men as lunatics...Genius is one of the many forms of insanity. (Lombroso 1889)

Problems with some of his tenets

Lombroso's work was always hampered by his Social Darwinist assumptions. In particular, he held the pre-genetic conception of evolution as "progress" from "lower life forms" to "higher life forms" together with an assumption that the more "advanced" human traits would dispose their owners to living peacefully within a hierarchical, urbanized society far different from the conditions under which human beings evolved.

In attempting to predict criminality by the shapes of the skulls and other physical features of criminals, he had in effect created a new pseudoscience of forensic phrenology. For example, he and his collaborators were the first ever to describe and explain the form of epilepsy known now as Taylor’s dysplasia. However, they used their observations to support their scientific misconception regarding the relationship between criminality, epilepsy, and genius.

While Lombroso was a pioneer of scientific criminology, and his work was one of the bases of the eugenics movement in the early twentieth century, his work is no longer considered as providing an adequate foundation for contemporary criminology. However, psychiatry and abnormal psychology have retained his idea of locating crime completely within the individual and utterly divorced from the surrounding social conditions and structures.

Cesare Lombroso was a historical figure in criminology and the founder of the Italian School of Positivist Criminology, which included Enrico Ferri (1856–1929) and Raffaele Garofalo (1851–1934). They rejected the concept of free will and the notion of equality expressed by the classicists, in which any individual through free choice makes rational decisions to behave as a criminal, replacing this with an assumption of determinism.

Lombroso developed the concept of the "atavistic," or born, criminal, based on anthropometric measurements. Although the scientific validity of the concept has been questioned by other criminologists, Lombroso is still credited with turning attention from the legalistic study of crime to the scientific study of the criminal. This new scientific criminology valued the experimental method based on empirically discovered facts and their examination. The knowledge gained was to be achieved carefully, over time, through systematic observation and scientific analysis.

In his later work, Lombroso differentiated the born criminal from those who turned to crime through circumstance, and the importance of distinguishing these types with regard to the efficacy of punishment. He is also noted for advocating humane treatment of criminals and limitations on the use of the death penalty.