Anthropometry is the measurement of physical attributes of human beings, such as head width, length of little finger, length of torso, etc. The technique was originally designed for the purpose of studying the variation of human physical characteristics, and was quickly adapted to create an early identification system. Such practices soon evolved into the systematic recording and tracking of criminals, although this system was subsequently replaced by fingerprinting. Attempts were made to identify criminal types based on physical characteristics using anthropometric techniques. Anthropometry was also used in efforts to justify racism. These problematic applications notwithstanding, anthropometric techniques have proved invaluable in many areas, including paleoanthropological research of pre-human fossils, and in identifying ergonomic and safety criteria for the design of a wide range of equipment, furniture, and other items. In these ways, anthropometry has contributed to the understanding of human evolution and to the creation of a better living environment for all people. 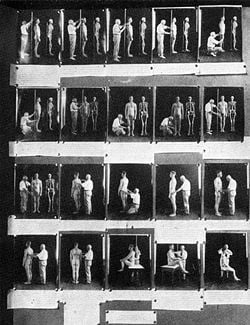 Anthropometry demonstrated in an exhibit from a 1921 eugenics conference.

Anthropometry, or the "measure of humans," is derived from the Greek terms ανθρωπος, meaning man, and μετρον, meaning measure. It is the standard technique in physical anthropology for measurement of living human individuals for the purposes of understanding human physical variation.

The French savant, Alphonse Bertillon, coined the phrase "physical anthropometry" in 1883, to include an identification system based on unchanging measurements of the human frame. Through patient inquiry, Bertillon found that several physical features and dimensions of certain bony structures within the human body remained considerably unchanged throughout adulthood.

From this, Bertillon concluded that when recording these measurements systematically, a single individual could be perfectly distinguished from another. When the value of Bertillon’s discovery was fully realized, his system was quickly adapted into police methodology in hopes of preventing false identifications and arrests. A chart from Bertillon's Identification anthropométrique (1893), demonstrating how to take measurements for his identification system.

The initial system in Paris involved collecting these details onto some 100,000 cards. This allowed an official to sort specific measurements, until they were able to identify the certain individual. The system of information was contained in one cabinet designed to facilitate a search as efficiently as possible. Measurement records were without individual names, and final identification was achieved by means of a photograph attached to an individual's measurement card.

Anthropometry was first introduced in the late nineteenth century to the field of criminalistics, helping to identifying individual criminals by physical characteristics. Francis Galton, a key contributor to the field, would later find flaws with Bertillon’s system. Galton realized that variables originally believed independent, such as forearm length and leg length, could be combined into a single causal variable defined as "stature." Galton, in realizing the redundancy of Bertillon’s measurements, had developed the statistical concept of correlation. 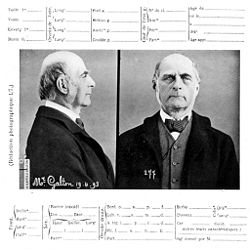 A Bertillon record for Francis Galton, from a visit to Bertillon's laboratory in 1893.

Alphonse Bertillon's goal was to use anthropometry as a way of identifying recidivists, or criminals likely to repeat their offense. Before the use of anthropometry, police officials relied solely on general descriptions and names to make arrests, and were unable to apprehend criminals employing false identities. Upon arrest, it was difficult to identify which criminals were first-time offenders and which were repeat offenders. Though the photographing of criminals had become common, it proved ineffectual, as a system had not been found to visually arrange the photographs in a fashion that allowed easy use. Bertillon believed that through the use of anthropometry, all information about an individual criminal could be reduced to a set of identifying numbers which could then be entered into a large filing system.

Bertillon also envisioned his system as being organized in such a way that, if recorded measurements were limited, the system would still work to drastically reduce the number of potential matches through the categorizing of characteristics as either small, medium, or large. If the length of an individual’s arm was categorized as medium, and the size of the foot known, the number of potential records to be compared would be drastically reduced. Bertillon believed that with more measurements of independent variables, a more precise identification system could be achieved and paired with photographic evidence. Aspects of this philosophy would reappear in Francis Galton's development of systematic fingerprinting.

The early Italian investigator, Cesare Lombroso, believed criminality to be inherited and employed aspects of Bertillion’s anthropometry in his work. Lombroso used anthropometrical measures to find individuals fitting “criminal types,” regardless of any previous conviction.

The use of anthropometry in the criminological realm eventually subsided, overcome by the development of systematic fingerprinting. Bertillon’s system of measurements exhibited certain defects which led to it falling into disuse. Objections to the Bertillonage system also included the exorbitant costs of anthropometric instruments, the need for exceptionally well-trained employees, and the significant opportunity for error.

Measures taken or recorded with inaccuracy could seldom, if ever, be corrected, and would defeat all chance of a successful search. Bertillonage was also deemed slow, as it was necessary to repeat the anthropometrical process three times to arrive at a mean result. In 1897, Bertillonage was replaced throughout British India by the adoption of Bengal’s fingerprint system. As the result of a fresh inquiry ordered by the Home Office, three years later, England followed suit and fingerprints alone came to be relied upon for identification. 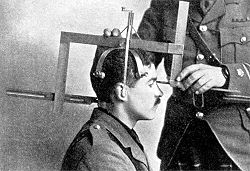 A "head-measurer" tool designed for anthropological research in the early 1910s.

During the early twentieth century, anthropometry was extensively employed by anthropologists throughout the United States and Europe. Anthropometric techniques were employed in the study of paleoanthropology to help determine pre-human species from fossilized skulls and bones.

Anthropometry was also used in attempted differentiation between the human races. When applications of intelligence testing were later incorporated, forms of anthropometry were used to associate physical characteristics with low intelligence, more primitive cultures and criminal behavior, and led to the exacerbation of racism worldwide.

During the 1920s, members of Franz Boas’ school of cultural anthropology began to use anthropometric approaches to discredit the concept of fixed biological race. In later years, Nazi Germany would rely on anthropometric measurements to distinguish “Aryans” from Jews. These approaches were abandoned in the years following the Holocaust, and the teaching of physical anthropology went into general decline.

During the 1940s, William H. Sheldon employed anthropometry to evaluate somatotypes, which posited that characteristics of the body could be translated into characteristics of the mind. Sheldon also believed that one’s criminality could be predicted according to body type. Sheldon ran into considerable controversy when his work became public, since he relied extensively on photographs of nude Ivy League students for his studies.

Anthropometric studies continue to be conducted for various purposes. Academic anthropologists often investigate the evolutionary significance of varying physical proportions between populations, stemming from ancestors from different environmental settings. Contemporary anthropometry has shown human populations to exhibit similar climatic variation to other large-bodied mammals. This finding is aligned with Bergmann's rule, that individuals in colder climates tend to be larger than individuals of warmer climates, and with Allen's rule, which states that individuals in cold climates will tend to have shorter, thicker limbs than those in warm climates.

Anthropologists have also used anthropometric variation to reconstruct small-scale population histories. In a study of twentieth century Ireland, John Relethford's collection of anthropometric data exhibited geographical patterns of body proportions coinciding with historic invasions of Ireland by the English and the Norsemen.

Aside from academia, anthropometric studies are conducted by scientists working for private companies and government agencies to determine the range of clothing sizes to be manufactured. Weight trainers often rely on the basic anthropometric divisions, derived by Sheldon, as a way of categorizing body type. Between 1945 and 1988, more than 40 anthropometric surveys of U.S. military personnel were conducted, including a 1988 Army Anthropometric Survey (ANSUR) of members within its 240 measures.

Anthropometry has served to study body measurements including size, shape, strength, and working capacity. These have shaped developments in clinical research, forensic identifications, and modern design. Despite such valuable contributions, the field of anthropometry has also experienced a history of abuse.

Though Cesare Lombroso’s early misuse of criminal profiling served to perpetuate social racism, the most infamous abuse of anthropometrical research occurred in the years leading up to, and surrounding, World War II. Anthropometrical studies performed by German Nazis were used in the classification of Aryans and non-Aryans, and lead to the decimation of countless individuals who did not fit into established categories.

After the events of World War II, the use of physical anthropometry for racial categorization was widely abandoned. Anthropometrical research was soon adapted into studies of human biology, including growth changes over time and objective signs of health. Anthropometric techniques have also proved invaluable in paleoanthropological research.

Anthropometric studies are used in the design of modern aircraft, preparation for cosmetic surgery, estimations of general health, and more. In addition, anthropometry is also paired with ergonomics, the scientific design of equipment, to craft office workstations, aircraft cockpits, and home furniture. Anthropometry is also used in safety design, specifically for infants and children. In its wide expansion, the field of anthropometry has recovered from a controversial history which perpetuated discrimination.