The Mandelbrot set is a famous example of a fractal.

A fractal is an irregular geometric shape that can be divided into parts in such a manner that the shape of each part resembles the shape of the whole. This property is called self-similarity. However, not all self-similar objects are fractals. For example, a straight Euclidean line (or real line) is formally self-similar, but it is regular enough to be described in Euclidean terms.

Images of fractals can be created using fractal generating software. Such software allows scientists to construct computer models of natural objects with irregular shapes that approximate fractals to some degree. These objects include clouds, coastlines, mountain ranges, lightning bolts, and snowflakes. A closer view of the Mandelbrot set.

The term fractal was coined by Benoît Mandelbrot in 1975 and was derived from the Latin word fractus, meaning "broken" or "fractured." In his book The Fractal Geometry of Nature, Mandelbrot describes a fractal as "a rough or fragmented geometric shape that can be split into parts, each of which is (at least approximately) a reduced-size copy of the whole."[1]

A mathematical fractal is based on an equation that undergoes iteration, a form of feedback based on recursion.[2]

A fractal often has the following features:[3]

Animated construction of a Sierpiński Triangle, only going nine generations of infinite—click for larger image.

To create a Koch snowflake, one begins with an equilateral triangle and then replaces the middle third of every line segment with a pair of line segments that form an equilateral "bump." One then performs the same replacement on every line segment of the resulting shape, ad infinitum. With every iteration, the perimeter of this shape increases by one third of the previous length. The Koch snowflake is the result of an infinite number of these iterations, and has an infinite length, while its area remains finite. For this reason, the Koch snowflake and similar constructions were sometimes called "monster curves."

The mathematics behind fractals began to take shape in the seventeenth century when mathematician and philosopher Leibniz considered recursive self-similarity (although he made the mistake of thinking that only the straight line was self-similar in this sense).

It took until 1872 before a function appeared whose graph would today be considered fractal, when Karl Weierstrass gave an example of a function with the non-intuitive property of being everywhere continuous but nowhere differentiable. In 1904, Helge von Koch, dissatisfied with Weierstrass's very abstract and analytic definition, gave a more geometric definition of a similar function, which is now called the Koch snowflake. In 1915, Waclaw Sierpinski constructed his triangle and, one year later, his carpet. Originally these geometric fractals were described as curves rather than the 2D shapes that they are known as in their modern constructions. In 1918, Bertrand Russell had recognized a "supreme beauty" within the mathematics of fractals that was then emerging.[2] The idea of self-similar curves was taken further by Paul Pierre Lévy, who, in his 1938 paper Plane or Space Curves and Surfaces Consisting of Parts Similar to the Whole described a new fractal curve, the Lévy C curve.

Iterated functions in the complex plane were investigated in the late nineteenth and early twentieth centuries by Henri Poincaré, Felix Klein, Pierre Fatou and Gaston Julia. However, without the aid of modern computer graphics, they lacked the means to visualize the beauty of many of the objects that they had discovered.

In the 1960s, Benoît Mandelbrot started investigating self-similarity in papers such as How Long Is the Coast of Britain? Statistical Self-Similarity and Fractional Dimension, which built on earlier work by Lewis Fry Richardson. Finally, in 1975 Mandelbrot coined the word "fractal" to denote an object whose Hausdorff-Besicovitch dimension is greater than its topological dimension. He illustrated this mathematical definition with striking computer-constructed visualizations. These images captured the popular imagination; many of them were based on recursion, leading to the popular meaning of the term "fractal." 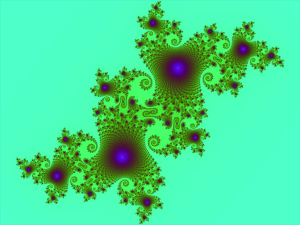 A Julia set, a fractal related to the Mandelbrot set

A class of examples is given by the Cantor sets, Sierpinski triangle and carpet, Menger sponge, dragon curve, space-filling curve, and Koch curve. Additional examples of fractals include the Lyapunov fractal and the limit sets of Kleinian groups. Fractals can be deterministic (all the above) or stochastic (that is, non-deterministic). For example, the trajectories of the Brownian motion in the plane have a Hausdorff dimension of two.

Chaotic dynamical systems are sometimes associated with fractals. Objects in the phase space of a dynamical system can be fractals (see attractor). Objects in the parameter space for a family of systems may be fractal as well. An interesting example is the Mandelbrot set. This set contains whole discs, so it has a Hausdorff dimension equal to its topological dimension of two—but what is truly surprising is that the boundary of the Mandelbrot set also has a Hausdorff dimension of two (while the topological dimension of one), a result proved by Mitsuhiro Shishikura in 1991. A closely related fractal is the Julia set.

Even simple smooth curves can exhibit the fractal property of self-similarity. For example the power-law curve (also known as a Pareto distribution) produces similar shapes at various magnifications.

Trees and ferns are fractal in nature and can be modeled on a computer by using a recursive algorithm. This recursive nature is obvious in these examples—a branch from a tree or a frond from a fern is a miniature replica of the whole: not identical, but similar in nature. The connection between fractals and leaves are currently being used to determine how much carbon is really contained in trees. This connection is hoped to help determine and solve the environmental issue of carbon emission and control. [4]

In 1999, certain self similar fractal shapes were shown to have a property of "frequency invariance"—the same electromagnetic properties no matter what the frequency—from Maxwell's equations (see fractal antenna).[5]

Fractal patterns have been found in the paintings of American artist Jackson Pollock. While Pollock's paintings appear to be composed of chaotic dripping and splattering, computer analysis has found fractal patterns in his work.[6]

Decalcomania, a technique used by artists such as Max Ernst, can produce fractal-like patterns.[7] It involves pressing paint between two surfaces and pulling them apart.

Fractals are also prevalent in African art and architecture. Circular houses appear in circles of circles, rectangular houses in rectangles of rectangles, and so on. Such scaling patterns can also be found in African textiles, sculpture, and even cornrow hairstyles.[8]

As described above, random fractals can be used to describe many highly irregular real-world objects. Other applications of fractals include:[10]