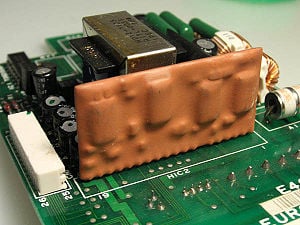 An epoxy encapsulated hybrid circuit on a printed circuit board.

In chemistry, epoxy (or polyepoxide) is the name for a group of thermosetting resins (polymers) that are formed from building blocks (monomers) that contain epoxide rings in their molecules. When a relatively low-molecular-weight epoxy polymer is mixed and cured with a catalyzing agent or "hardener" (containing amine or anhydride groups), the molecules become cross-linked to form a tough, highly stable material that is resistant to corrosive chemicals.

The applications for epoxy-based materials are extensive. They are extremely good adhesives and are very useful in preparing protective surface coatings. They are often used in building and repairing boats, protecting electronic circuit boards, and making composite materials, such as those using carbon fiber and fiberglass reinforcements. (Polyester, vinyl ester, and other thermosetting resins are also used for glass-reinforced plastic.) In 2006, the epoxy industry amounted to more than US$5 billion in North America and about US$15 billion worldwide.

Most common epoxy resins are produced from a reaction between epichlorohydrin (an epoxide) and bisphenol-A, whose molecular structures are shown above. The reaction produces a low-molecular-weight polymer that is known as an "epoxy prepolymer." The general structure of the prepolymer is shown below, in which n denotes the number of polymerized subunits and ranges from 0 to about 25.

When the epoxy prepolymer reacts with a hardener consisting of amines (diamines) or acid anhydrides, a highly cross-linked matrix is produced, corresponding to the strong, hard final product.

When using epoxy resin and hardener, vinegar is an effective and safe solvent to clean up tools, brushes, and most surfaces. Acetone can also be used, but it is very volatile and flammable. DME (dimethoxyethane) is also a good solvent for epoxy resin and hardener that gives off very little vapor. White vinegar can even clean up epoxy resin that is beginning to cure/harden. However, once the resin is cured, vinegar, acetone, and DME are no longer effective solvents for dissolving epoxy.

The chemistry of epoxies and the range of commercially available variations allows cure polymers to be produced with a broad range of properties. In general, epoxies are known for their excellent adhesion, chemical and heat resistance, good-to-excellent mechanical properties, and very good electrical insulating properties.

Various properties of epoxies can be modified. For example, silver-filled epoxies with good electrical conductivity are available, although epoxies are typically electrical insulators.

The classic epoxy reference guide is the Handbook of Epoxy Resins, by Henry Lee and Kris Neville. Originally issued in 1967, it has been reissued repeatedly and still gives an excellent overview of the technology.[1]

Establishment of the epoxy industry

The first commercial attempts to prepare resins from epichlorohydrin were made in 1927, in the United States. Credit for the first synthesis of bisphenol-A-based epoxy resins is shared by Dr. Pierre Castan of Switzerland and Dr. S.O. Greenlee of the United States, in 1936.

Dr. Castan's work was licensed by Ciba, Ltd. of Switzerland, which went on to become one of the three major epoxy resin producers worldwide. Ciba's epoxy business was spun off and sold in the late 1990s, and it is now the Advanced Materials business unit of Huntsman Corporation of the United States.

Dr. Greenlee's work was for the firm of Devoe-Reynolds of the United States. Devoe-Reynolds, which was active in the early days of the epoxy resin industry, was sold to Shell Chemical, now Hexion Specialty Chemicals.[2]

Currently, the epoxy industry is made up of roughly 50–100 manufacturers of basic or commodity epoxy resins and hardeners. The commodity epoxy manufacturers typically do not sell epoxy resins in a form usable by smaller end users. For this reason, other companies purchase epoxy raw materials from the major producers and then produce (blend, modify, or otherwise customize) epoxy systems from the raw materials. These companies are known as "formulators." The majority of the epoxy systems sold are produced by these formulators, which make up over 60 percent of the dollar value of the epoxy market.

There are numerous ways in which these formulators can modify epoxies, such as by adding mineral fillers (including talc, silica, alumina), flexibilizers, viscosity reducers, colorants, thickeners, accelerators, or adhesion promoters. These modifications are made to reduce costs, improve performance, and improve processing convenience. As a result, a typical formulator sells dozens or even thousands of formulations, each tailored to the requirements of a particular application or market.

"Two-part waterborne epoxy coatings" are used as ambient cure epoxy coatings. These two-part epoxy coatings have been developed for heavy-duty service on metal substrates and use less energy than heat-cured powder coatings. These systems use a more attractive mixing ratio of 4:1 by volume. The coating dries quickly, providing toughness, UV resistance, excellent hardness, and good mar and abrasion resistance. 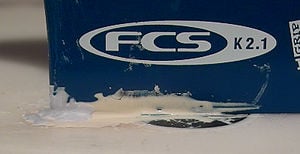 Special epoxy is strong enough to withstand the extreme force transferred from a surfboard fin to the fin mount. This epoxy is waterproof and capable of curing underwater. The blue-colored epoxy on the left is still in the curing process.

Epoxy adhesives are a major part of the class of adhesives called "structural adhesives" or "engineering adhesives," (which also includes polyurethane, acrylic, cyanoacrylate, and other chemistries). These high-performance adhesives are used in the construction of aircraft, automobiles, bicycles, boats, golf clubs, skis, snow boards, and other applications where high-strength bonds are required.

Epoxy adhesives can be developed to suit almost any application. They are exceptional adhesives for wood, metal, glass, stone, and some plastics. They can be made flexible or rigid, transparent or opaque/colored, fast setting or extremely slow setting. Epoxy adhesives are almost unmatched in heat and chemical resistance among common adhesives. In general, epoxy adhesives cured with heat will be more heat- and chemical-resistant than those cured at room temperature.

Some epoxies are cured by exposure to ultraviolet light. Such epoxies are commonly used in optics, fiber optics, optoelectronics, and dentistry.

Epoxy systems are also used in industrial tooling applications to produce molds, master models, laminates, castings, fixtures, and other industrial production aids. This "plastic tooling" replaces metal, wood, and other traditional materials and generally improves the efficiency and either lowers the overall cost or shortens the lead-time for many industrial processes. Epoxies are also used in producing fiber reinforced or composite parts. They are more expensive than polyester resins and vinyl ester resins, but generally produce stronger and more temperature resistant composite parts.

Epoxy resin formulations are also important in the electronics industry, and are employed in motors, generators, transformers, switchgear, bushings, and insulators. Epoxy resins are excellent electrical insulators and protect electrical components from short circuiting, dust, and moisture. In the electronics industry, epoxy resins are the primary resin used in overmolding integrated circuits, transistors, and hybrid circuits, and making printed circuit boards. The largest volume type of circuit board—an "FR-4 board"—is a sandwich of layers of glass cloth bonded into a composite by an epoxy resin. Epoxy resins are used to bond copper foil to circuit board substrates, and are a component of the solder mask on many circuit boards. Additionally, flexible epoxy resins are used for potting transformers and inductors. By using vacuum impregnation on uncured epoxy, air voids in winding to winding, winding to core and winding to insulator are eliminated. The cured epoxy, as above, is an insulator and a much better conductor of heat than air. Transformer and inductor hot spots are greatly reduced which gives the component a stable and longer life than unpotted product.

Epoxy resins are applied using the technology of resin casting.

Epoxies are sold in hardware stores, typically as two component kits. They are also sold in boat shops as repair resins for marine applications. Epoxies typically are not used in the outer layer of a boat because they deteriorate by exposure to UV light. They are often used during boat repair and assembly, and then over-coated with conventional or two-part polyurethane paint or marine-varnishes that provide UV protection.

There are two main areas of marine use. Because of the better mechanical properties relative to the more common polyester resins, epoxies are used for commercial manufacture of components where a high strength/weight ratio is required. The second area is that their strength, gap filling properties, and excellent adhesion to many materials including timber have created a boom in amateur building projects, including of aircraft and boats.

Normal gel coats formulated for use with polyester resins and vinylester resins do not adhere to epoxy surfaces, though epoxy adheres very well if applied to polyester resin surfaces. "Flocoat" that is normally used to coat the interior of polyester fibreglass yachts is also compatible with epoxies.

In the aerospace industry, epoxy is used as a structural matrix material which is then reinforced by fiber. Typical fiber reinforcements include glass, carbon, Kevlar, and boron. Epoxies are also used as a structural glue. Materials like wood, and others that are "low-tech" are glued with epoxy resin. One example is the IBIS Canard homebuilt aircraft RJ.03.[5] This design is based on a classic wooden lattice structured fuselage and a classic wooden spar, internally stiffened with foam and completely covered with plywood. Except for the plywood covering the wings, everything is glued with epoxy resin.

The primary risk associated with epoxy use is often related to the hardener component and not to the epoxy resin itself. Amine hardeners in particular are generally corrosive, but may also be classed toxic and/or carcinogenic or mutagenic. Aromatic amines present a particular health hazard (most are known or suspected carcinogens), but their use is now restricted to specific industrial applications, and safer aliphatic or cycloaliphatic amines are commonly employed.

Liquid epoxy resins in their uncured state are mostly classed as irritant to the eyes and skin, as well as toxic to aquatic organisms. Solid epoxy resins are generally safer than liquid epoxy resins, and many are classified non-hazardous materials. One particular risk associated with epoxy resins is sensitization. The risk has been shown to be more pronounced in epoxy resins containing low molecular weight epoxy diluents.[6] Exposure to epoxy resins can, over time, induce an allergic reaction. Sensitization generally occurs due to repeated exposure (e.g. through poor working hygiene and/or lack of protective equipment) over a long period of time. Allergic reaction sometimes occurs at a time which is delayed several days from the exposure. Allergic reaction is often visible in the form of dermatitis, particularly in areas where the exposure has been highest (commonly hands and forearms). Bisphenol A, which is used to manufacture a common class of epoxy resins, is a known endocrine disruptor.