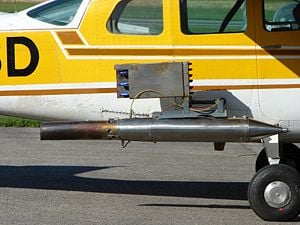 Cloud seeding, a form of weather modification, is the attempt to change the amount or type of precipitation that falls from clouds, by dispersing substances into the air that serve as cloud condensation or ice nuclei. The usual intent is to increase precipitation, and, in some circumstances, to suppress hail.

The first attempt at cloud seeding was in upstate New York, during 1946. Vincent Schaefer, a General Electric chemist, caused snow to fall near Schenectady, after he dropped six pounds of dry ice into a cloud from a plane.[1] Schaefer had serendipitously discovered that adding dry ice to a supercooled cloud in a cold chamber led to the formation of ice crystals. He then designed a dispenser to drop the solid carbon dioxide over an atmospheric cloud, which produced the first man made snow.[2]

Did you know?
The first attempt at cloud seeding was in 1946 when dry ice dropped from a plane led to snow fall

Noted atmospheric scientist Bernard Vonnegut (brother of novelist Kurt Vonnegut) is credited with discovering the potential of silver iodide for use in cloud seeding during 1946, while working for the General Electric Corporation in the state of New York. Silver iodide is mostly used for winter snowfall augmentation over mountains and hail suppression. While not a new technique, hygroscopic seeding for enhancement of rainfall in warm clouds is enjoying a revival, based on some positive indications from research in South Africa, Mexico, and elsewhere. The hygroscopic material most commonly used is salt. It is postulated that hygroscopic seeding causes the droplet size spectrum in clouds to become more maritime (bigger drops) and less continental, stimulating rainfall through coalescence.

From March 1967 until July 1972, the U.S. military's Operation Popeye cloud seeded silver iodide to extend the monsoon season over North Vietnam, specifically the Ho Chi Minh Trail. The operation resulted in the targeted areas seeing an extension of the monsoon period an average of 30 to 45 days.[3] The 54th Weather Reconnaissance Squadron carried out the operation to "make mud, not war."

During the 1970s, one private organization that offered to conduct weather modification (cloud seeding from the ground using silver iodide flares) was Irving P. Crick and Associates of Palm Springs, California. They were contracted by Oklahoma State University in 1972, to conduct such a seeding project to increase warm cloud rainfall in the Lake Carl Blackwell watershed. That lake was, at that time (1972-73), the primary water supply for Stillwater, Oklahoma, and was dangerously low. The project did not operate for a long enough time to show statistically any change from natural variations. Yet, seeding operations have been ongoing in California since 1948.

An attempt by the United States military to modify hurricanes in the Atlantic basin using cloud seeding in the 1960s was called Project Stormfury. Only a few hurricanes were tested with cloud seeding because of the strict rules that were set by the scientists of the project. It was unclear whether the project was successful; hurricanes appeared to change in structure slightly, but only temporarily. The fear that cloud seeding could potentially change the course or power of hurricanes and negatively affect people in the storm's path stopped the project.

Two Federal agencies have supported various weather modification research projects, which began in the early 1960s: The United States Bureau of Reclamation (Reclamation; Department of the Interior) and the National Oceanic and Atmospheric Administration (NOAA; Department of Commerce). In the 1970s NOAA funded the Florida Area Cumulus Experiment (FACE), which failed to show that cloud seeding increased rainfall,[4] and conducted the Atmospheric Modification Program from 1979-1993. Reclamation sponsored several cloud seeding research projects under the umbrella of Project Skywater from 1964-1988. The sponsored projects were carried out in several states and two countries (Thailand and Morocco), studying both winter and summer cloud seeding. More recently, Reclamation sponsored a small cooperative research program with six Western states called the Weather Damage Modification Program, from 2002-2006.

Funding for research has declined in the last two decades. A 2003 study by the United States National Academy of Sciences[5] urges a national research program to clear up remaining questions about weather modification's efficacy and practice.

In Australia, CSIRO conducted major trials between 1947 and the early 1960s:

Only the trial conducted in the Snowy Mountains produced statistically significant rainfall increases over the entire experiment. 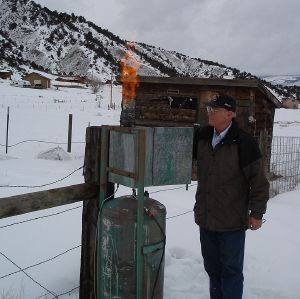 The most common chemicals used for cloud seeding include silver iodide and dry ice (frozen carbon dioxide). The expansion of liquid propane into a gas is being used on a smaller scale. The use of hygroscopic materials, such as salt, is increasing in popularity because of some promising research results.

Seeding of clouds requires that they contain supercooled liquid water—that is, liquid water colder than zero degrees Celsius. Introduction of a substance such as silver iodide, which has a crystalline structure similar to that of ice, will induce freezing (heterogeneous nucleation). Dry ice or propane expansion cools the air to such an extent that ice crystals can nucleate spontaneously from the vapor phase. Unlike seeding with silver iodide, this spontaneous nucleation does not require any existing droplets or particles because it produces extremely high vapor supersaturations near the seeding substance. However, the existing droplets are needed for the ice crystals to grow into large enough particles to precipitate out.

In mid-latitude clouds, the usual seeding strategy has been predicated upon the fact that the equilibrium vapor pressure is lower over water than over ice. When ice particles form in supercooled clouds, this fact allows the ice particles to grow at the expense of liquid droplets. If there is sufficient growth, the particles become heavy enough to fall as snow (or, if melting occurs, rain) from clouds that otherwise would produce no precipitation. This process is known as "static" seeding.

Cloud seeding chemicals may be dispersed by aircraft or by dispersion devices located on the ground (generators). For release by aircraft, silver iodide flares are ignited and dispersed as an aircraft flies through a cloud. When released by devices on the ground, the fine particles are downwind and upwards by air currents after release.

Although cloud seeding has been shown to be effective in altering cloud structure and size, and converting cloud water to ice particles, it is more controversial whether cloud seeding increases the amount of precipitation to reach the ground. Part of the problem is that it is difficult to discern how much precipitation would have occurred had the cloud not been "seeded." In other words, it is hard to discern additional precipitation from seeding from the natural precipitation variability, which is frequently much greater in magnitude.

Nevertheless, there is more credible scientific evidence for the effectiveness of winter cloud seeding over mountains (to produce snow) than there is for seeding warm-season cumuliform (convective) clouds. This statement is supported by the professional societies Weather Modification Association,[6] World Meteorological Organization, and American Meteorological Society (AMS). The AMS further states that there is statistical evidence for seasonal precipitation increases of about 10 percent with winter seeding.[7]

The National Center for Atmospheric Research (NCAR), an institution in Boulder, Colorado, has made some statistical analysis of seeded and unseeded clouds in an attempt to understand the differences between them. They have conducted seeding research in several countries that include Mali, Saudi Arabia, Mexico, South Africa, Thailand, Italy, and Argentina.

The largest cloud seeding system in the world is that of the People's Republic of China, which believes that it increases the amount of rain over several increasingly arid regions, including its capital city, Beijing, by firing silver iodide rockets into the sky where rain is desired. There is even political strife caused by neighboring regions which accuse each other of "stealing rain" using cloud seeding.[8] About 24 countries currently practice weather modification operationally. China also used cloud seeding in Beijing just before the 2008 Olympic Games in hopes of clearing the air of pollution.[9]

In the United States, cloud seeding is used to increase precipitation in areas experiencing drought, to reduce the size of hailstones that form in thunderstorms, and to reduce the amount of fog in and around airports. Cloud seeding is also occasionally used by major ski resorts to induce snowfall. Eleven western states and one Canadian province (Alberta) have ongoing weather modification operational programs.[10] In January 2006, an $8.8 million cloud seeding project began in Wyoming to examine the effects of cloud seeding on snowfall over Wyoming's Medicine Bow, Sierra Madre, and Wind River mountain ranges.[11]

A number of commercial companies offer weather modification services centered on cloud seeding. In addition, the U.S. Air Force proposed its use on the battlefield in 1996, although the U.S. signed an international treaty in 1978, banning the use of weather modification for hostile purposes.

In Australia, CSIRO’s activities in Tasmania in the 1960s were successful. Seeding over the Hydro-Electricity Commission catchment area on the Central Plateau achieved rainfall increases as high as 30 percent in autumn. The Tasmanian experiments were so successful that the Commission has regularly undertaken seeding ever since in mountainous parts of the State.

Russian military pilots seeded clouds over Belarus after the Chernobyl disaster to remove radioactive particles from clouds heading toward Moscow.[12]

Beginning in winter 2004, Snowy Hydro Limited conducted a six-year research project of winter cloud seeding to assess the feasibility of increasing snow precipitation in the Snowy Mountains in Australia. The NSW Natural Resources Commission, responsible for supervising the cloud seeding operations, believes that the trial may have difficulty establishing statistically whether cloud seeding operations are increasing snowfall. This project was discussed at a summit in Narrabri, NSW on December 1, 2006. The summit met with the intention of outlining a proposal for a five year trial, focusing on Northern NSW. The various implications of such a widespread trial were discussed, drawing on the combined knowledge of several worldwide experts, including representatives from the Tasmanian Hydro Cloud Seeding Project.

At the July 2006 G8 Summit, President Putin commented that air force jets had been deployed to seed incoming clouds so they rained over Finland. Rain drenched the summit anyway.[13]

In Southeast Asia, open burning produces haze that pollutes the regional environment. Cloud-seeding has been used to improve the air quality by encouraging rainfall.

In December 2006, the Queensland government of Australia announced AUD$7.6 million in funding for "warm cloud" seeding research to be conducted jointly by the Australian Bureau of Meteorology and the United States National Center for Atmospheric Research.[14] One of the hoped for outcomes was to ease continuing drought conditions in the states South East region.