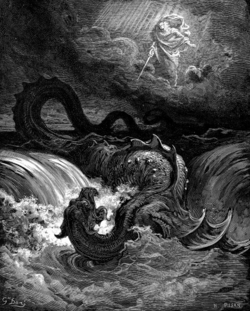 The destruction of Leviathan by God, thought by some scholars to parallel the defeat of Yam or Lotan by Baal.

Yam or Yamm, from the ancient Semitic word meaning "sea," is the name of the Canaanite god of rivers and the sea. Yam was also the deity of the primordial chaos. He represented the power of the tempestuous sea untamed and raging. Also called Nahar ("river") he additionally ruled floods and related disasters.

In West Semitic mythology, Yam was given kingship over the other gods by the chief god El. When Yam's rulership turned tyrannical and he possessed El's wife Asherah, the storm deity Baal (Hadad) challenged and defeated Yam in a titanic battle, ending with Yam cast down from the heavenly mountain Saphon.

The mythic sea dragon Lotan, whom Baal also defeated, was closely associated with Yam and possibly an aspect of him. A similar sea-demon appears in the mythology of many cultures. The biblical monster Leviathan is seen as related to Lotan, and his dwelling, the sea, is called yam in the Hebrew Bible.

Yam's defeat by Baal parallels the Mesopotamian legend of the storm god Marduk's victory over the primordial sea goddess Tiamat. Numerous other parallel myths have been noted by mythologists and religion scholars, often interpreted as representing the triumph of heavenly order over primeval chaos.

In the Epic of Ba'al

A primary source for our knowledge concerning Yam is the Epic of Baal, also known as the Baal Cycle, which describes the storm god Baal coming to ascendancy in the Canaanite pantheon.

In the beginning, the kindly but distant El, the father of the gods, bequeaths the divine kingship to Yam. The sea deity, however, soon turns tyrant and oppresses the other gods. Asherah, the mother goddess, attempts to reason with Yam, but he adamantly refuses to relent. In desperation for the welfare of her children, Asherah finally consents to give Yam her own body.

Sitting in council with the other gods, Baal is outraged at this idea and determines to rebel against Yam. Hearing of Baal's plan, Yam brazenly demands that Baal be handed over to him for punishment, sending emissaries to the Assembly of the Gods who show no respect even to El. Baal secures weapons from the divine craftsman Kothar-wa-Khasis and proceeds to defeat Yam in a mighty battle, rescuing Asherah from her fate and liberating the other gods from Yam's oppression, thus becoming their lord.

However, Baal in turn proceeds to be defeated by Mot, the desert god of death and infertility, who accuses him of having killed the great sea serpent Lotan, closely associated with Yam. Baal himself is rescued by the efforts of his sister Anat, so that he may rise again and reign supreme in an apparent re-enactment of the annual cycles of rain and drought.

Little is known about the manner in which Yam may have been worshiped.

Kindly El… gave the kingship to Prince Yam.
He gave the power to Judge Nahar.
Fearsome Yam came to rule the gods with an iron fist.
He caused them to labor and toil under his reign.
They cried unto their mother, Asherah, Lady of the Sea.

Asherah went into the presence of Prince Yam….
She begged that he release his grip upon the gods her sons.
But Mighty Yam declined her request….
Finally, kindly Asherah, who loves her children, offered herself to the god of the Sea.
She offered her own body to the Lord of Rivers...
She came before the Divine Council and spoke of her plan to the gods her children.

Baal was infuriated by her speech. He was angered at the gods who would allow such a plot.
He would not consent to surrendering Great Asherah to the Tyrant Yam-Nahar.
He swore to the gods that he would destroy Prince Yam…
Yam-Nahar was made aware of the words of Baal. He sent His two messengers to the court of El:

"Depart Lads!…. At the feet of El do not fall,
Do not prostrate yourselves before the convocation of the Assembly,
But declare your information and say to the Bull, my father, El:

'Give up, O gods, him whom you harbor, him whom the multitude harbor!
Give up Baal and his partisans… so that I may inherit his gold!'"

The club swoops from the hands of Baal, like an eagle from his fingers….
Yam is strong; he is not vanquished,
His joints do not fail, nor does his frame collapse….
The weapon springs from the hand of the Lord Baal,
Like a raptor from between his fingers.
It strikes the skull of Prince Yam, between the eyes of Judge Nahar.
Yam collapses, he falls to the earth; his joints quiver, and his spine shakes….
Then up speaks Yam: "Lo, I am as good as dead! Surely, the Lord now reigns as king!"

Similarities in other mythological traditions 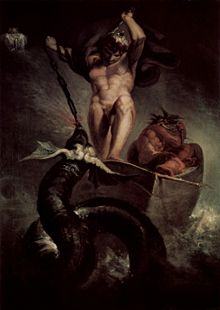 Yam (sea) and his secondary title Nahar (river) bear definite similarities with the older Mesopotamian deities Tiamat and Apsu, the primordial gods of salt water and fresh water, respectively. In the Babylonian epic Enuma Elish, Tiamat and her tyrannical henchman Kingu are defeated and slain by the storm god Marduk, who then becomes the supreme ruler and king of the gods, much as Yam is defeated by Baal, who ascends to the kingship of the Canaanite gods.

The battle between Yam and Baal also resembles the conflict in Hurrian and Hittite mythology between the sky God Teshub (or Tarhunt) and the serpent Illuyanka. In another Hittite myth, when the sea-dragon Hedammu threatens the earth and its creatures with his assaults, the goddess Ishtar pretends to offer herself to him.

The Egyptians also knew of Yam, perhaps borrowing the story from their Canaanite neighbors. The fragmentary Astarte Papyrus hints at Yam's unreasonable demands for tribute from the other deities. As with the case of Asherah in the Baal Cycle and Ishtar in the Hittite myth, the goddess Astarte then offers to become Yam's consort in order to placate him. She is helped to defeat Yam by the desert storm god Set. Another Egyptian tradition involved the casting of statues of the goddess of the Nile into the river to become its bride. Some scholars also see a parallel between Yam-Lotar and the Egyptian chaos serpent Apep the eternal adversary of the sun god Ra.

Norse mythology also speaks of a world-serpent and deity of the sea named Jörmungandr. Like Yam, he is the archenemy of the storm god, in this case Thor, son of Odin.

In Greek mythology, the serpent-titan Typhon battled the storm god Zeus over Olympus and was cast into the pits of the Earth. Yam also shares certain characteristics with Greco-Roman Ophion, the serpentine Titan of the sea, whom Kronos cast out of the heavenly Mt. Olympus. Parallels between Oceanus or Poseidon to Yam have also been noted.

Finally, the story of Yam and Baal is also seen as analogous to the Vedic myth of the war between the serpent Vritra and the god Indra, son of the 'Sky Father' Dyaus Pita.

In the Biblical tradition, the polytheistic mythologies of the sky and storm gods conquering the primordial sea demon is replaced by the idea that God reigned supreme from the beginning. Thus, Genesis 1:1 states: "In the beginning God created the heavens and the earth." Yet, in the following verse, even before the creation of light, an echo of the older myth of the sky god creating order out of the watery chaos may be seen: "darkness was over the surface of the deep, and the Spirit of God was hovering over the waters. 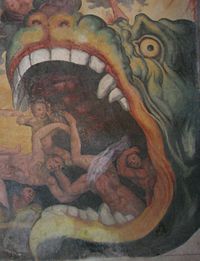 Psalm 89:9 reiterates the theme of God's sovereignty over the chaotic deep: "You rule over the surging sea; when its waves mount up, you still them." However, Psalm 74:14 preserves a tradition which reflects the Hebrew deity Yahweh's acting in Baal's role, by defeating the sea monster Leviathan (Lotan): "It was you who crushed the heads of Leviathan and gave him as food to the creatures of the desert." The Book of Job 3:8 seems to refer to a day when the tyrant of the sea will wake from his sleep, speaking of "those who are ready to rouse Leviathan." Isaiah 27:1, meanwhile refers to God's victory over Leviathan in the future: "In that day the Lord with His severe sword, great and strong, will punish Leviathan the fleeing serpent, Leviathan that twisted serpent; He will slay the reptile that is in the sea." 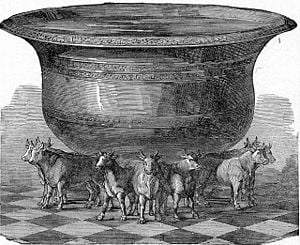 The bronze "sea" (yam) which stood before the Temple of Jerusalem was about 15 feet in diameter.

The Hebrew word for "sea" in these verses is yam. In ancient Israel, God's sovereignty over the waters of chaos was symbolized in the Temple of Jerusalem, as an many other ancient temples of the Middle East, by the presence of a large bronze "sea" which stood placidly near the temple's entrance.

The story of the prophet Jonah involves an episode at sea in which Jonah is blamed for a life-threatening storm by his pagan shipmates after they cast lots to discover who is responsible. He is thrown overboard by the sailors in an effort to assuage his angry deity, Yahweh, and is swallowed by a great fish who seems to be a type of Leviathan. The story may hint at a practice followed by Levantine fisherman involving human sacrifice to Yam in times of extreme danger.

In some Christian interpretations of (Genesis 3:15), the serpent of Eden is seen as equivalent to Leviathan, whom the Messiah (or the Archangel Michael), like Baal, will one day vanquish: "He will crush your (the serpent's) head, and you will strike his heel." A relevant passage in the Book of Revelation reads: "And the great dragon was cast out, that old serpent, called the Devil and Satan, which deceiveth the whole world." (Rev. 12:9) Later, Revelation describes the final destruction of Satan, after which the declaration is made: "Then I saw a new heaven and a new earth, for the first heaven and the first earth had passed away, and there was no longer any sea." (Rev. 21:1)

Connections between Yam and YHWH

While the above-mentioned biblical analogies, tend to see Yahweh as parallel to Baal in his conquering of Yam-Lotan, some scholars have seen connections between Yam and Yahweh. Biblical scholar Mark S. Smith provides evidence that Yam original's name was Yaw [1]. The resemblance of the latter to the Tetragrammaton YHWH or Yahweh led to speculation over a possible connection between Yam and God of the Hebrew Bible. However, many scholars argue the names have different linguistic roots and reject the idea that they are related.

Another suggested reading of the name is Ya'a. This has been suggested as an early form of the divine name Yah or Yahu. A theory proposed at the beginning of the twentieth century suggested that Ya'a was a form of the name Ea, the Mesopotamian water deity.[2] This view has been supported in more recent times by archaeologists such as Jean Bottero [3] among others. However, Ea's mythology makes him far more kindly than Yam, and the parallel to the older Mesopotamian sea deity Tiamat seem more likely, despite the supposed etymological similarity to Ea.