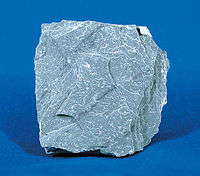 Slate is a fine-grained, homogeneous, metamorphic rock. It is derived from an original shale-type sedimentary rock composed of clay or volcanic ash through low-grade regional metamorphism. The result is a foliated rock in which the foliation may not correspond to the original sedimentary layering.

This rock is useful for a variety of practical applications. For instance, it is used for roofing shingles, wall cladding, floor tiles, stairways, and pathways. It is also used for laboratory benchtops and billiard table tops, and as decor in freshwater aquariums. 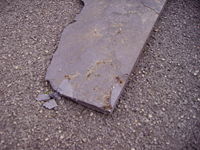 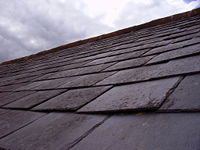 Slate-producing regions of the world include:

Slate is also found in the Arctic and was used by the Inuit to make blades for ulus. China has vast slate deposits; in recent years, its export of finished and unfinished slate has increased.

Slate is mainly composed of quartz and muscovite or illite, often along with biotite, chlorite, hematite, and pyrite. Less frequently, it contains apatite, graphite, kaolin, magnetite, tourmaline, or zircon as well as feldspar. Occasionally, as in the purple slates of North Wales, ferrous reduction spheres form around iron nuclei, leaving a light green spotted texture—the spheres sometimes deformed by a subsequent applied stress field to ovoids, which appear as ellipses when viewed on a cleavage plane of the specimen.

Slate can be made into roofing slates, also called roofing shingles, because it has two lines of breakability: cleavage and grain. This makes it possible to split slate into thin sheets. Fine slate can also be used as a whetstone to hone knives. Due to its thermal stability and chemical inertness, slate has been used for laboratory bench tops and for billiard table tops. In eighteenth- and nineteenth-century schools, slate was extensively used for blackboards and individual writing slates for which slate pencils were used.

Slate tiles are often used for interior and exterior flooring or wall cladding. Tiles are installed and set on mortar and grouted along the edges. Chemical sealants are often used on tiles to improve durability and appearance, increase stain resistance, reduce efflorence, and increase or reduce surface smoothness. Tiles are often sold gauged, meaning that the back surface is ground for ease of installation.

Slate is often used as a decor in freshwater aquariums. Slate will not alter the chemistry of water {except in the slate containing feldspar which may leech silicates into the water resulting in excess diatom growth in marine aquaria). When broken, slate produces a natural appearance while remaining relatively flat and can be easily stacked. Silicon glue adheres to slate, creating a non-toxic bond to secure it. It is also used in stairs and pathways for the same reasons.