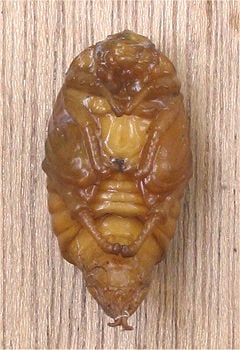 Pupa of the Cockchafer (Melolontha melolontha)

Pupa (plural: pupae or pupas) is the non-feeding, typically externally inactive life stage between the larva and the adult in holometabolous insects, that is, those insects undergoing a complete metamorphosis through four life stages: embryo, larva, pupa, and adult or imago. The pupa stage is part of the life cycle of such diverse insects as beetles, flies, bees, wasps, ants, butterflies, moths, fleas, and caddisflies.

Pupae may further be enclosed in other structures such as cocoons, nests, or shells (Borror et al. 1989). A cocoon is the silk protective covering that moth caterpillars and other insects spin prior to becoming a pupa. Silk harvested from the cocoon of the silkworm species Bombyx mori has been a source of fine and beautiful fabric for more than two millenniums.

The butterfly pupa, or chrysalis, is rarely enclosed in a cocoon, but the caterpillar of some butterfly species may spin a silk thread to suspend the chrysalis.

Although the pupa of most species appears externally to be an inactive stage, a great deal of metabolic activity is taking place as the insect is transformed into an adult, with some organs deteriorating and new structures and organs developing.

In addition to this stage's practical value for the insects themselves, as it prepares them for a remarkable transformation from the worm-like larva to the winged adult, it also adds to the great diversity of life, contributing to the fascination that nature holds for people.

The pupal stage is found only in holometabolous insects. Holometabolism, also called complete metamorphosis and complex metamorphosis, is a term applied to those processes in which the larvae differ markedly from the adults. Insects that undergo holometabolism pass through a larval stage, then enter a non-feeding state as a pupa (Latin pupa for doll), and finally emerge as adults (imago). This is in contrast to insects that undergo hemimetabolism or incomplete metamorphosis, in which the larvae resemble the adults somewhat, as they have compound eyes, developed legs and wing stubs visible on the outside, but the juvenile forms are smaller and, if the adult has wings, lack wings. In this mode of development, there are three distinct stages: the egg, nymph, and the adult stage, or imago; there is no pupal stage.

In the life cycle of an insect, the pupal stage follows the larval stage and precedes adulthood (imago). It is during the time of pupation that the adult structures of the insect are formed while the larval structures are broken down. Pupae are inactive, and usually sessile (not able to move about). Some have a protective covering. Most moth caterpillars spin a cocoon made of silk within which they metamorphose into the pupal stage. Most butterflies, on the other hand, form an exposed pupa, which is also termed as a chrysalis.

Pupation may be brief, for example two weeks as in monarch butterflies, or the pupa may enter dormancy or diapause until the appropriate season for the adult insect. (In temperate climates, pupae usually stay dormant during winter, while in the tropics pupae usually do so during the dry season.)

Insects emerge (eclose) from pupas by splitting the pupal case, and the whole process of pupation is controlled by the insect's hormones. Most butterflies emerge in the morning. In mosquitoes, the emergence typically is in the evening or night. In fleas, the process is triggered by vibrations that indicate the possible presence of a potential host. 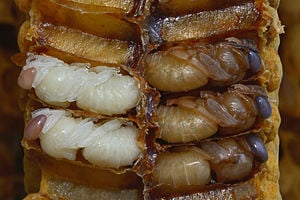 During the pupal stage, the insect's larval tissues break down and groups of cells known as imaginal disks develop into the adult tissues, using the nutrients from the broken down larva (Towle 1989). This process of cell death is called histolysis, and cell regrowth histogenesis.

In some insect orders, the appendages such as legs and proboscis are free and visible in the pupal stage. Such pupae are termed as exarate and examples are seen in the Hymenoptera. In many other orders, the pupa is a tight and compact shell with all the appendages tightly packed within and these pupae are termed as obtect. The familiar lepidopteran chrysalis is obtect.

The wings or wing pads, which are not visible on the outside of the larva, become apparent in the pupal stage. However, tiny developing "wing disks" actually can be found in the larval stage. In butterfly caterpillars near pupation, the wings are forced outside the epidermis under pressure from the hemolymph (the fluid in the open circulatory system), and although they are initially quite flexible and fragile, by the time the pupa breaks free of the larval cuticle they have adhered tightly to the outer cuticle of the pupa (in obtect pupae). Within hours, the wings form a cuticle so hard and well-joined to the body that pupae can be picked up and handled without damage to the wings. To transform from the miniature wings visible on the outside of the pupa into large structures usable for flight, the pupal wings undergo rapid mitosis and absorb a great deal of nutrients. 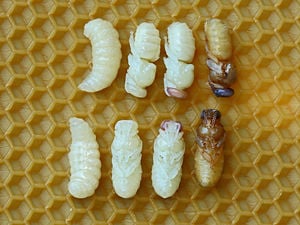 Stages of development of the honeybee pupa.

Pupae are usually immovable and are largely defenseless. To overcome this, a common feature is concealed placement. Some species of Lycaenid butterflies are protected in their pupal stage by ants. Some species of pupae are capable of making sounds or vibrations to scare potential predators. A few species use chemical defenses including toxic secretions. The pupae of social hymenopterans are protected by adult members of the hive. 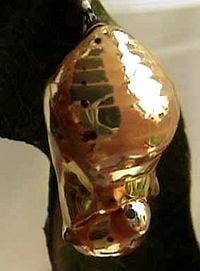 A chrysalis (plural: chrysalides) or nympha is the pupal stage of butterflies. The term (Latin chrysallis, from Greek χρυσαλλίς = chrysallís) is derived from the metallic gold-coloration found in the pupae of many butterflies referred to by the Greek term χρυσός (chrysós) for gold.

Because chrysalids are often showy and are formed in the open, they are the most familiar examples of pupae. Most chrysalids are attached to a surface by a Velcro-like arrangement of a silken pad spun by the caterpillar and a set of hooks (cremaster) at the tip of the pupal abdomen.

Like other types of pupae, the chrysalis stage in most butterflies is one in which there is little movement. However, some butterfly pupae are capable of moving the abdominal segments to produce sounds or to scare away potential predators. Within the chrysalis, growth and differentiation occur. The adult butterfly emerges (ecloses) from this and expands its wings by pumping haemolymph into the wing veins.

Moth pupae are usually dark in color and either formed in underground cells, loose in the soil, or their pupa is contained in a protective silk case called a cocoon. Very few butterfly larvae spin a cocoon.

Aurelia is an old synonym of chrysalis from which is derived the term aurelian; one who studies the emergence of butterflies from chrysalids. 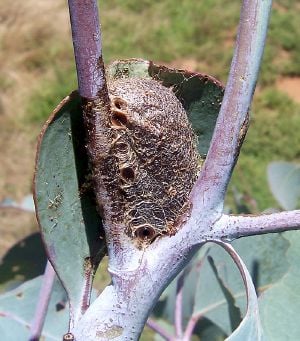 The tough brown cocoon of an Emperor Gum Moth

A cocoon is a casing spun of silk by many moth caterpillars and numerous other holometabolous insect larvae as a protective covering for the pupa.

Cocoons may be tough or soft, opaque or translucent, solid or meshlike, of various colors, or composed of multiple layers, depending on the type of insect larva producing it. Many moth caterpillars shed the larval hairs (setae) and incorporate them into the cocoon; if these are urticating hairs then the cocoon is also irritating to the touch. Some larvae attach small twigs, fecal pellets or pieces of vegetation to the outside of their cocoon in an attempt to disguise it from predators. Others spin their cocoon in a concealed location—on the underside of a leaf, in a crevice, down near the base of a tree trunk, suspended from a twig or concealed in the leaf litter (Scoble 1992).

Insects that pupate in a cocoon must escape from it, and they do this either by the pupa cutting its way out, or by secreting fluids that soften the cocoon. Some cocoons are constructed with built-in lines of weakness along which they will tear easily from inside, or with exit holes that only allow a one-way passage out; such features facilitate the escape of the adult insect after it emerges from the pupal skin.

Retrieved from https://www.newworldencyclopedia.org/p/index.php?title=Pupa&oldid=988664
Categories:
Hidden category:
This page was last edited on 16 June 2015, at 18:40.
Content is available under Creative Commons Attribution/Share-Alike License; additional terms may apply. See Terms of Use for details.