The monarch butterfly is a large butterfly, Danaus plexippus, that is noted for its long migrations and which is characterized by reddish-brown wings with distinctive, thick black veins and white-spotted black borders. It is a member of the milkweed butterflies (family Danaidae or sometimes subfamily Danainae), which lay their eggs on various milkweeds on which their larvae (caterpillars) feed.

The monarch butterfly is perhaps the most well-known of all the butterflies in North America, although the species is found in other regions as well. Some populations migrate over 2,000 miles in the autumn from southern Canada to the monarch's winter home in central Mexico and return in the spring—a 4,000 mile round-trip, although two, three, or four generations have passed during that time (Gugliotta 2003). Other North American populations come to this area of pine forest from the northeastern or mid-western United States, or overwinter in California. Some have made trans-Atlantic crossings.

With their beauty and extraordinary migratory behavior, monarch butterflies add greatly to the wonder and mystery of nature for humans.

The monarch butterfly, Danaus plexippus, is placed in the subfamily Danainae in the family Nymphalidae, or brush-footed butterflies. Historically, this group has often been considered a separate family, Danaidae. Members of this group lay their eggs on milkweed plants, which provide a food source for the larvae. There are some 300 species of Danainae worldwide, but only four are found in North America—the monarch butterfly, the queen butterfly (Danaus gilippus), the tropical milkweed butterfly (Lycorea cleobaea), and the soldier butterfly (or "tropic queen," Danaus eresimus). The monarch butterfly is the best known member of this family. 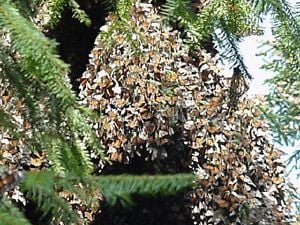 Monarchs at the Angangueo overwintering site in Mexico.

The wings of the monarch butterfly feature an easily recognizable orange and black pattern, with a wingspan of 8.5 to 12.5 centimeters (3.34 inches to 4.92 inches). Female monarchs have darker veins on their wings, and the males have a spot in the center of each hindwing from which pheromones are released. The caterpillars likewise have bright stripes.

The monarch butterfly, as with the queen butterfly and the soldier butterfly, will eat only milkweed and nothing else. Due to the ingesting of cardenolide glycosides from the milkweed, which is retained by larva and adults, monarchs are foul-tasting and poisonous. Both larva and adults advertise their unpalatability with bright colors and areas of high contrast on the skin or wings. This phenomenon is known as aposematism. This is a highly effective defense strategy, shielding them against almost all predators, as potential predators learn to avoid these species quickly after attempting to eat them.

Monarchs share this defense with the even more unpleasant-tasting and similar-appearing viceroy butterfly. Over most of its range, the viceroy butterfly is a Müllerian mimic with the monarch butterfly. However, in Florida, Georgia, and the Southwest, viceroys share the pattern of the queen butterfly and in Mexico they share the pattern of the soldier butterfly. In all three areas, the viceroy populations mimic the coloration of the local Danaus species. It was originally believed that the viceroy was a Batesian mimic of the three other species, in that it was presumably edible or only mildly unpalatable to predators, but this has since proven not to be true.

In addition to North America, where it is found from Mexico (where it is a migrant) to Canada, the monarch butterfly is found in other parts of the world. Since the 19th century, it has been found in New Zealand and in Australia where it is known as the wanderer butterfly. In Europe, it is resident in the Canary Islands and Madeira, and it is found as a migrant in Azores, Portugal, and Spain.

Monarchs are especially noted for their lengthy annual migration. They make massive southward migrations starting in August until the first frost. A northward migration takes place in the spring. Female monarchs deposit eggs for the next generation during these migrations.

Populations of monarchs as far north as Winnipeg, Canada are known to have overwintered in a thirty acre pine forest in the Mexican state of Michoacan to the west of Mexico City (Gugliotta 2003). Others from the northeastern and mid-western United States likewise make the long travel to Mexico, while other populations may overwinter in California.

By the end of October, the population of the Rocky Mountains migrates to the sanctuaries in the areas of Angangueo, Ocampo, Zitácuaro, and El Rosario in Michoacán, Mexico. The western population overwinters in various sites in central coastal California, United States, notably in Pacific Grove and Santa Cruz.

The length of these journeys exceeds the normal lifespan of most monarchs, which is less than two months for butterflies born in early summer. The last generation of the summer enters into a non-reproductive phase known as diapause and may live up to 7 months. During diapause, butterflies fly to one of many overwintering sites. The generation that overwinters generally does not reproduce until it leaves the overwintering site sometime in February and March. It is thought that the overwinter population may reach as far north as Texas and Oklahoma during the spring migration. It is the second, third and fourth generations that return to their northern locations in the United States and Canada in the spring. How the species manages to return to the same overwintering spots over a gap of several generations is still a subject of research; the flight patterns appear to be inherited, based on a combination of circadian rhythm and the position of the sun in the sky (Gugliotta 2003).

A few monarchs turn up in the far southwest of Great Britain in years when the wind conditions are right, and have been sighted as far east as Long Bennington. Monarchs can also be found in New Zealand during summer, but are absent the rest of the year. On the island of Hawaii no migrations have been noted.

Monarchs can live a life of six to eight weeks in a garden having their host Asclepias (milkweed) plants and sufficient flowers for nectar. This is especially true if the flower garden happens to be surrounded by native forest that seems to be lacking in flowers.

Monarch butterflies are holometabolic insects; that is, they undergo complete metamorphosis, also known as holometabolism and complex metamorphosis. This process involves one in which the larvae differ markedly from the adults. Insects that undergo holometabolism pass through a larval stage, then enter an inactive state called pupa, and finally emerge as adults (imago).

In the case of the monarch butterfly, as with all butterflies, the life cycle involves the embryo growing within the egg, hatching into the segmented larva (caterpillar), before entering the pupal stage within its chrysalis, and finally emerging as an adult butterfly imago. The caterpillar looks more like a worm than an adult butterfly, but has the typical insect three pairs of jointed legs as well as several pairs of fleshy legs (Towle 1989). In the immobile pupal stage, the animal is encased in a protective coating called a chrysalis. In this stage, the insect will excrete digestive juices to destroy much of the larva's body, leaving a few cells intact, while groups of cells, called imaginal disks, develop into the tissues of the adult, using the nutrients from the broken down larva. This process of cell death is called histolysis, and cell regrowth histogenesis.

The mating period for the overwinter population occurs in the spring, just prior to migration from the overwintering sites. The courtship is fairly simple and less dependent on chemical pheromones in comparison with other species in its genus. Courtship is composed of two distinct stages, the aerial phase and the ground phase. During the aerial phase, the male pursues, nudges, and eventually takes down the female. Copulation occurs during the ground phase and involves the transfer of a spermatophore from the male to the female. Along with sperm, the spermatophore is thought to provide the female with energy resources that aid her in carrying out reproduction and re-migration. The overwinter population returns only as far north as they need to go to find the early milkweed growth; in the case of the eastern butterflies that is commonly southern Texas.

This butterfly is closely related to one or two very similar species that were formerly considered to form the Danaus (Danaus) subgenus (Smith et al. 2005). One is the Jamaican monarch (Danaus cleophile) of Jamaica and Hispaniola.

The other is a butterfly that is almost indistinguishable from the monarch as an adult (the pupae are somewhat more different) and occurs south of the Amazonas river. This taxon, Danaus erippus ("southern monarch"), is often considered a subspecies of the monarch butterfly proper. Analysis of morphological, mtDNA 12S rRNA, and cytochrome c oxidase subunit I, and nuclear DNA 18S rRNA and EF1 subunit α sequence data indicates that it is better considered a distinct species (Smith et al. 2005).

However, as a species, the southern monarch is only comparatively recently evolved. In all likelihood, its ancestors separated from the monarch's population some two million years ago, at the end of the Pliocene, when sea levels were higher and the entire Amazonas lowland was a vast expanse of brackish swamp that offered hardly any butterfly habitat (Smith et al. 2005).

Recent illegal deforestation of the monarch's overwintering grounds have led to a drastic reduction in the butterfly's population. Efforts to classify it as a protected species and to restore its habitat are under way.

Monarch butterflies are susceptible to Ophryocystis elektroscirrha, a protozoan which parasitizes them. It is present on the abdomen of adult butterflies and passed to their offspring when the spores rub off during egg-laying and are then ingested by the caterpillars. The effects of the parasite on monarchs include decreased weight, shortened lifespan, weakened wings, and rapid weight loss, though this varies between butterfly populations and parasite strains.

For migrating flocks, sanctuaries have been created at favorite wintering locations. Many people also like to attract monarchs by growing a butterfly garden. Others enjoy raising them for pleasure or for educational purposes.